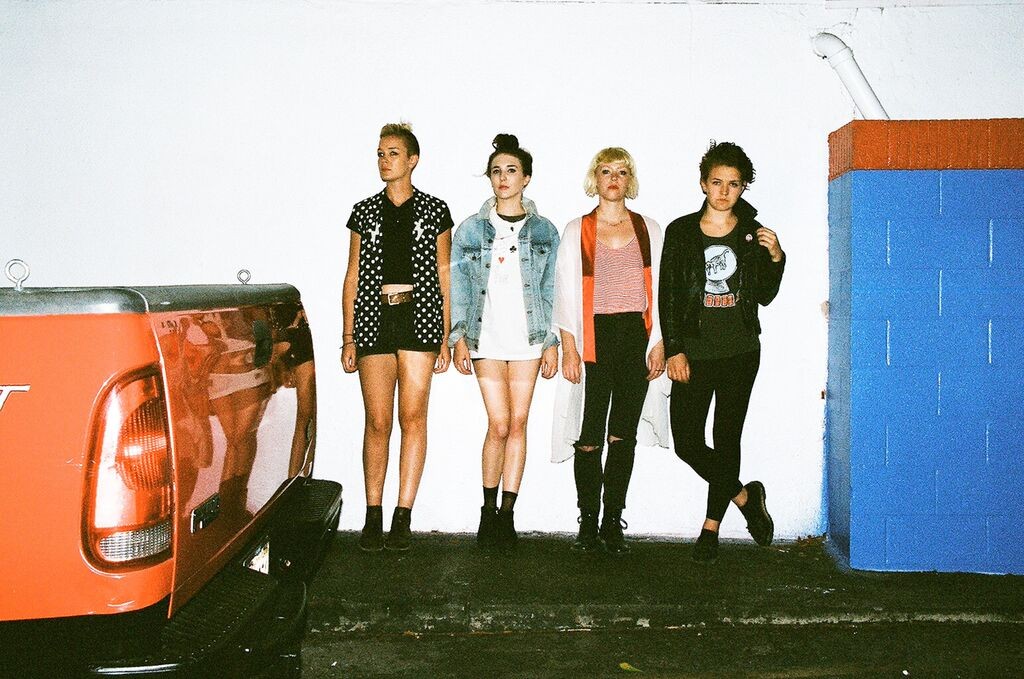 In an age where genres seem to only exist as a conduit for music journalists to flex their encyclopedic knowledge of rare stratified sub-genres or inventing hollow multi-hyphenated descriptors: PINS is a breath of fresh air. The red-hot Manchester quartet are putting out straightforward punk with refreshing pop sensibilities, and doing it all with that effortlessly cool flair that made rock ‘n’ roll sexy to begin with. They’re touring the States now and are set to release their sophomore album Wild Nights June 9th (on Bella Union). While out on the road Faith Holgate (vox/ guitar) and Lois McDonald (guitar) took the time to answer a couple burning questions about the band, their style, and what music gets their gears turning.

AudioFemme: First an easy one – what’s the origin story behind PINS?

Faith: I wanted to do music my whole life! I tried to join a bunch of different bands, but nothing felt good and I’d end up quitting after two practices. So I decided to make my own band. It took around a year to have a stable line up, but it was a lot of fun. We had a small rehearsal space in Manchester where we would meet up, drink beer, and play music all night.

AF: What are some of your major musical influences?

Faith: My go-to bands are Suicide, Velvet Underground, Spacemen 3, the Fall, Modern Lovers, and the Brian Jonestown Massacre. But I go out to see live music all the time and constantly feel inspired. For instance we toured with Drenge and I was like we totally need a baritone guitar, or when we saw Sunflower Bean and we were like we need to do some psych bass!

Lois: I think the Beatles at the moment, there’s so much music they made and so many different techniques they used it’s amazing. But influences for me change day to day with my mood. I try to listen and soak up as much as possible. There’s the garage girls from the 60’s which are collectively like an anonymous enigma of attitude, but most recently I’ve been listening to Wire, The Fall, Drenge, Girlpool, Timber Timbre and Deap Vally.

Faith: For the most part it’s like a hen party.

AF: On a more serious note, being a “girl-gang” group do you feel a sense of responsibility to be visible and vocal for young female, and otherwise, musicians out there?

Faith: Yeah, myself and Lois run Haus Of Pins, which is a cassette label, and although it’s not exclusive to women at all we do like to champion girls. Our shows are often girl-heavy too, again, we don’t exclusively ask female acts to open for us, but it’s something we are aware of.

Faith: It still needs the ladies to join the party! The local scene is very male heavy. New bands to listen to are Peace and Love Barbershop Muhammad Ali, whom I recently played keys for, and Black Lung, they seem to be conjuring up something exciting.

Lois: There’s lots of different scenes happening here, and it’s nice to be near so many other cities that are thriving creatively too. Bands from here I’m into are Kyogen, Bernard and Edith, and Bad Grammar.

Lois: That’s a tricky one, we did two very different shows in two days recently in Berlin and both were amazing, but I’ll always love playing Manchester.

AF: You guys are constantly being praised for your slick fashion sense, how does fashion fold into your music?

Faith: The aesthetics of our band has always been important to us, from the way we make the stage look to the videos we make, to the covers of our records and the clothes we wear. I suppose image is both a reflection of who we are and another extension of our personalities. However trivial putting makeup on and getting dressed for a show could seem, for us it has become a ritual, it’s a uniform that visually unites us.

AF: What were some of the driving forces behind soon to be released LP Wild Nights?

Faith: Dave Catching and Hayden Scott were great driving forces. They showed us how to enjoy recording. Most of it was done live and then we played around adding textures, it was so much fun.

Lois: The album is sort of summed up by the title, going with the moment and enjoying every minute whilst you can.

AF: What comes next for you ladies?

Faith: We’re touring the US in June, then playing some festivals in Europe and doing a headline tour in the UK and Europe later in the year. Still writing music and working on different projects.

AF: And last, but not least, if the band had a theme song what would it be?