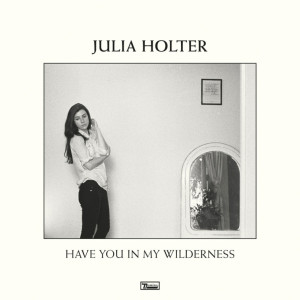 As summer comes to a close and the sun sets a little sooner on us all Julia Holter is preparing to release her fourth studio album Have You In My Wilderness. The timing I’d love to believe is one of those serendipitous things, her classic and timeless brand of Americana folk settling onto my shoulders like the sweaters I’ll soon need. A perfect pairing of creation and created. Though I know it’s planned, the machine’s behind it, but I’m comforted by the knowledge that they got it right. She got it right. A first listen through the album and nary a disappointing number among the bunch. It’s a languid tale, a lazy river of emotionally wrought but not fussed over music.

Julia and I caught up over the phone recently to talk a bit about the album, her art and what she has planned for the future.

AudioFemme: How do you think you’ve changed and grown as an artist and how are you showcasing that on Have You In My Wilderness?

Julia Holter: I don’t know, I’m never able to say how I’ve grown. Obviously you learn things with experience, so that is true. With every new record I’m trying to do something different and so I never am really conscious of what the progression is. One thing that I learned over the past two years is how to work with people. I was recording all alone for several years before I started working with other people. It took a lot of courage for me to try to have other people play my music. It’s really fun, it’s different. I mean I like playing my own music solo, but it’s been really nice working with other people.

AF: Can you tell us a little about your own particular process of song creation?

JH: I tend to write, especially these songs for this record, very quickly. They just kind of came out of me while I would be at the piano playing. I would say almost all of them were written to piano with the exception of “Vasquez”. It would happen really fast, it just comes out of my mouth and my hands at the same time, these fragments of a phrase along with a musical phrase. And then what happens is you have to develop it, that’s the tricky part. Developing these ideas, but staying true to the initial creation of your subconscious that happened in those seconds where you came up with it. Revisiting it, repeating or creating a new section that’s similar is the hardest part.

AF: Is the album meant to be consumed as a book or vignettes?

JH: I was imagining this was like a collection of ballads. It’s a bunch of songs, some of them are love songs, but there’s these themes of power struggles in relationships. Other than that they’re all independent. But I think that that’s a nice way to look at it –  like they’re a bunch of short stories.

AF: What was it like to record in your hometown LA?

JH: The process was similar for this record and the previous one, where I would make demos and then I’d arrange them for musicians to play and we’d record them with Cole (M. Greif-Neill) at the computer as a producer, rather than myself. And I think it was really nice to see people do what they do really well with what I was presenting them. It’s teamwork in that way. Once I realized that the world isn’t against me and people are interested in playing my music because they are interested in new experiences I calmed down and was able to enjoy the process. I’m always defensive and thinking everyone would much rather do anything else than play my music, which is silly because musicians are interested in doing new things. I love being in the studio so much because you it’s like a playground of sound.

AF: Do you like drawing comparisons to other artists?

JH: I don’t know if most people like that at all. It’s just because it makes it hard to see yourself if you’re being compared to someone else, but obviously that’s what people do. That’s what journalists and music critics or anybody analyzing music is going to compare it to other music because that makes sense. But for an artist it’s hard to think that way, because obviously there’s music that I love and music that I’ve probably been inspired by, but I’m usually not. I tend to not make music inspired by other music directly. Usually if I’m inspired by something it’s something that’s not music, like a story or a movie or something.

AF: Do you enjoy touring?

JH: Yes and no. I love performing and I love being able to see other places I’ve never been to. There’s no denying that. It’s very cool, and I’m very lucky that I get to do that. I don’t ever say no, but I definitely hate flying so much and I hate being uncomfortable and traveling, like the process of traveling, it’s really rough on your body. Getting sick on tour is so terrible and you get sick a lot because of the lack of sleep. There’s good sides and bad sides, but on the whole basically what I’m doing is my dream and I’m so happy.

AF: Are there any cities or places that you just love?

JH: For whatever reason I’ve played a lot of shows and had a good time in different cities in Poland. There’s always a really great audience there. People are really into music and enthusiastic pretty much everywhere I’ve played there. Europe in general is just very receptive to a lot of different music more so than my own country, so it’s nice to go there as a musician and be welcomed and I like that. I really can’t say there’s a place I’ve had terrible experiences yet. I like everywhere I’ve been.

AF: If it hadn’t been music what else strikes a chord?

JH: Oh I don’t know. I would probably be a teacher or something. I could teach music theory or something. But outside of music? I could be an English teacher maybe. But that’s hard, I know it’s not easy either. I don’t know. To be honest I think about it a lot, how lucky I am to do this, I don’t know what else I can do.

AF: With the impending album release (9/25) what comes next for you?

JH: I’m doing a film score right now for a boxing movie. And I’m working on collaborations with a few friends.I really want to do more scoring.

AF: Can you talk more about the film score and how you fell into that position?

JH: The director heard my music on the radio and I think he very bravely asked me to do it, against the will of the people probably. There’s a lot of professional film scorers out there, and I’m not. I haven’t done it. I mean I have, but not professionally. So he’s just been really supportive and it’s been really really great experience so far. It’s kind of  a mellow score, simple with bluesy piano.

JH: I’m listening to the score for Inherent Vice. I like it. It’s Jonny Greenwood. I never listen to scores. It’s such a new thing for me, but it’s such an obvious thing for me to enjoy. I think it’s funny I’ve never done it.