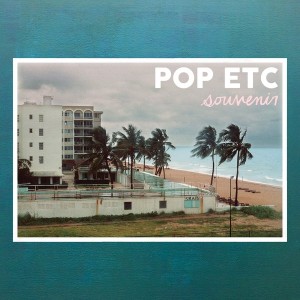 Berkeley-born and Brooklyn-based trio POP ETC are back with Souvenir, a follow up to 2012’s eponymous release.

In the last three years, the band has traversed in an even poppier direction, almost a little cheesy. But in a time when “pop” is considered an obscenity, a genre to be left for the tweens, POP ETC makes something shimmer on Souvenir.

The first single, “What Am I Becoming?” stands out as one of my favorite tracks, right next to the relentlessly catchy “Vice,” where lead singer Chris Chu sings, “You’ve got that vice that I like/No matter how hard I fight/It takes a hold of me right now.”

“Your Heart is a Weapon” and “Running in Circles” most clearly relay the 80’s synth-pop feel dominating the album. Slowing it down, “I Wanted to Change the World But the World Changed Me” (apart from being a mouthful of a title) is set in motion by a catchy guitar hook immediately reminiscent of “No Scrubs” by TLC.

The album is sprinkled with bits of R&B influence throughout, and it’s fair to assume these guys have spent some time listening to the likes of both Duran Duran and Mariah, and everything in between.

Perhaps that explains where the “et cetera” comes from.

There’s a clearly deliberate cohesion on Souvenir that was lacking on the overdone POP ETC.  Simplifying the production and easing up on the auto-tune makes for a delightful listen, and a pretty good dance party playlist for fans of other contemporary indie pop artists like Ra Ra Riot or Washed Out.

The boys are currently on tour with Oh Wonder, and will be playing Music Hall of Williamsburg this Friday and Bowery Ballroom on Saturday.