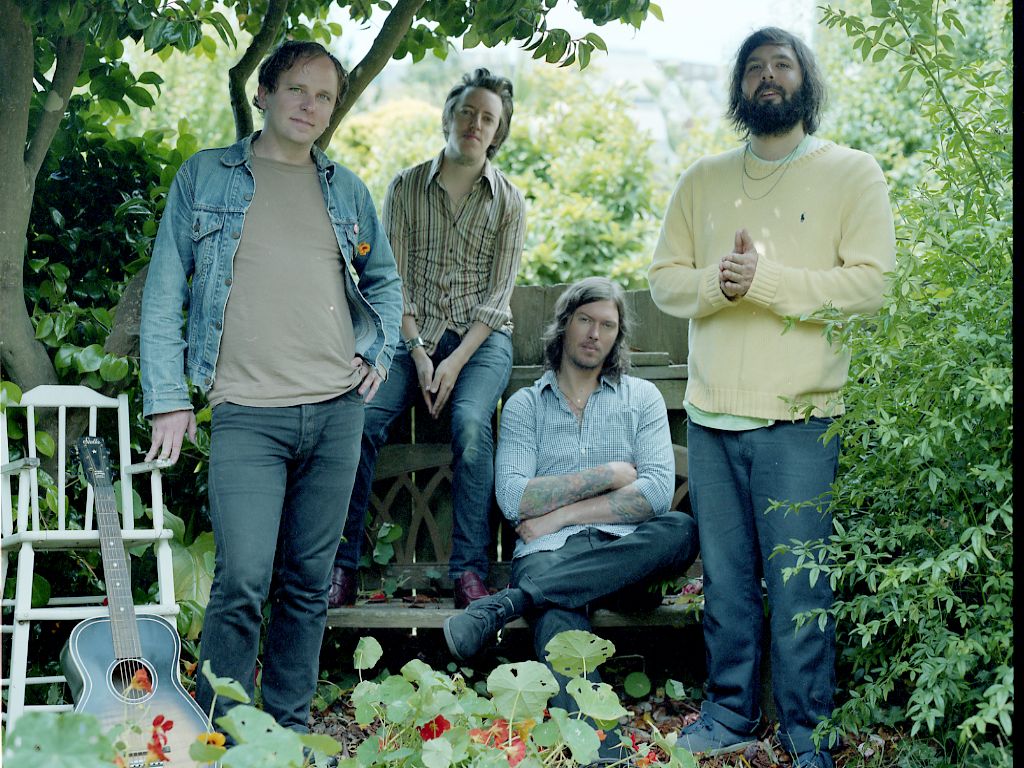 House Of Spirits, out June 10th on Mexican Summer, is the newest release from San Francisco psych-rock janglers The Fresh & Onlys, is a study in subtle kookiness. Fronting vocalist Tim Cohen, who wrote many of the songs on this album alone on a ranch in the Arizona desert, has a voice that seems inherently gentle and intimate. His ear for wistful pop harmonies–with golden arpeggios to match from guitarist Wymond Miles–often place this group squarely in the sphere of indie endearingness that reaches backwards towards nostalgia, not forwards towards absurdity. That was the very much the case on the group’s last full-length, 2012’s Long Slow Dance, an album brimming with romantic earnestness and stellar pop songs. But House Of Spirits is a little different.

Though the melodies don’t often give way to Cohen’s more experimental songwriting tendencies, they’re a shade spookier than par, and–especially in the first few tracks–dwell distinctly in the province of dreams. Album opener “Home Is Where?” begins innocently enough, with sweetly plodding piano chords and a quiet vocal line whose lyrics are sort of extolling the comforts of being home and knowing where you belong, and then all the sudden the song derails with the line “There is something that is off, for example there’s a bowl full of eyes on the floor.” It’s more than an impeccable instance of dream logic, this track also sets the bar for surreality. Anything is fair game, essentially, on House Of Spirits: there will be twists, and you will not be able to see them coming.

According to Cohen, all of House Of Spirits represents a search for home and the disorientation of not recognizing a place that should be familiar. However, the record’s back half takes place in waking life, as opposed to in a dream, and the kookiness gets a little watered down once the images of bowls full of eyes and stewpots full of hearts succumbs to conscious thought. The album ambles onward into daylight, and loses a lot of its sharpness. The affectionate “Ballerina” would feel more at home on Long Slow Dance, and even so, the track lacks passion. Next, though the repetition of the melody over horns on “Candy” offers a coolly sinister ending, it’s otherwise a one-dimensionally sunny song. The lack of curveballs in the latter tracks is all the more disappointing because we’ve been set up to expect twisting and turning, and we keep waiting for the song’s sinister side to poke its head up from underneath the surface. Only on the last cut, “Madness,” do we return to the disoriented search for familiar territory that kicked off House Of Spirits. Experimental, distorted guitar parts flood a gentle vocal line, reassuring lyrics give way to spooky echoes, and all the music melts into noise, and finally silence. At no point is “Madness” as catchy as “Home Is Where?” or the album’s three frontloaded scorchers– “Who Let The Devil,” “Bells of Paonia,” and “Animal of One” –but it does belong to the same surreal, imaginative dreamscape.

House Of Spirits will be out via Mexican Summer Records on June 10th. The New York Times is streaming the album in full, and you can check out “Who Let The Devil” below via Soundcloud: