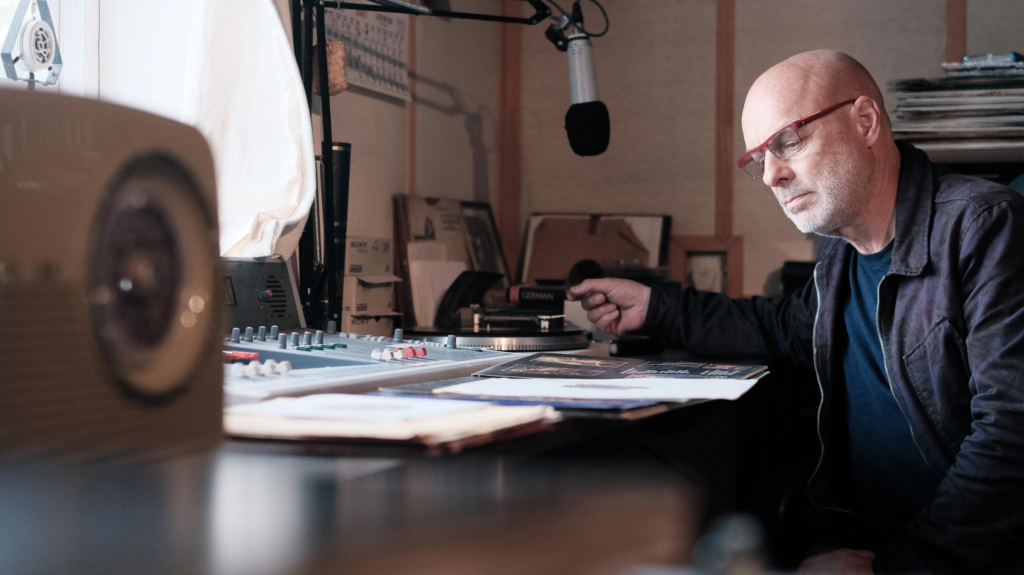 Eno is a name long associated with experimentation, versatility, and subversiveness (and great production, of course). In the wake of recent musical and political events – the deaths of many progressive and influential musicians, including frequent collaborator David Bowie, and the rise of conservatism in the UK – a new Brian Eno piece feels especially poignant and significant. Reflection follows the same rules and systems of most of Eno’s ambient productions, or generative music as he calls it. The term “generative”, coined by Eno in the 90s, refers to music that is ever-changing and generated by a system, like a computer. This technological aspect of Reflection inspired an app that can be downloaded in place of buying the album. The app has an audio visualizer that changes as the music slowly shifts tones based on the time of day.

After I stumbled across this bizarre, intriguing interview, I felt I had to meditate on the ambiguous, yet apparently political nature of this album and the manner in which seemingly inoffensive music can be political.

I think it’s important to note the indefinable quality of albums like this. Fundamentally, can we call it an album? Holding true to its title, Reflection harks back to Eno’s 1985 Thursday Afternoon in its design. It’s one continual piece of music that moves through nearly an hour of time. Is it one song? One track? That language doesn’t really fit this music and to think of Reflection the way we might a regular album doesn’t work. Expectantly, Brian Eno is trying to push beyond the limitations of a “record”. Generative music, by Eno’s own definition, is primarily structural and mechanical, and part of its inspiration comes from linguistic theory, So, like linguistics, structural, generative work is also surprisingly progressive, full of movement, and difficult to pin down. But the important question: does this kind of music work? Does it break restrictions in a way that is memorable and meaningful?

Here I have to admit a strong affection for Brian Eno’s music, past and present. Here Come the Warm Jets will always be mind-blowing and original with its juxtaposition of melody and dissonance, order and nonsensical chaos. More relevantly, his work on David Bowie’s Berlin trilogy included some fantastic, atmospheric ambient tracks like “Warszawa” (from Low) and “Neukölln” (from Heroes). These songs have an ability to instill an intense and almost visual mood. They’re cathartic and emotive but with no clear meaning or trajectory. This flexibility can actually make the tracks more touching, personal, and imaginative.

I think of Eno’s newer, generative music like an isolation tank: there’s a kind of forced reflection. Like Fripp & Eno, it’s the sort of music you can lie on the floor next to a friend, close your eyes, and listen to – a disparate, yet shared experience. There’s definitely a comforting aspect to the slow, steady design and, particularly, the lower, darker notes in Reflection. But there’s also something that nears over-stimulation – and discomfort – in a deep listen. Its simplicity, its malleability somehow becomes forceful.

In that interview I mentioned, Eno spoke passionately about Brexit and Donald Trump and, thereby, the ways in which his music is political. What he said could strike as absurd or profound:

“I’m interested in the idea of generative music as a sort of model for how society or politics could work. I’m working out the ideas I’m interested in, about how you make a working society rather than a dysfunctional one like the one we live in at the moment – by trying to make music in a new way. I’m trying to see what kinds of models and and structures make the music I want to hear, and then I’m finding it’s not a bad idea to try to think about making societies in that way.”

The article goes on to explain what he means. As opposed to a classical orchestra, society should be built on the more egalitarian model of a folk or rock band, who just get together and do their thing.

These are some provocative words. It’s difficult to think of Reflection, an album with no words and no prescriptiveness, as political. But re-listening, with these words in mind, makes the structural elements of the album more noticeable and thereby, more suggestive and, as I said before, forceful.

Simple as a piece of music, Reflection is perfect for thinkers and daydreamers. Personally, I love this sound. It’s slow and steady, but adaptable and never droning. The subtle, changing melodies on this record are delightfully easy to digest. Like the title of another Eno album (or two) Music For Airplanes, this record is great to listen to in the car or train as you look out the window. The deeper notes that wiggle in throughout are crisp and inspiring. However, I wouldn’t call this easy listening. It takes a certain amount of focus, or prior knowledge of the genre, to give it a good listen.

So, to answer my question from earlier: absolutely yes, ambient music can be memorable and meaningful simply because of its experimental and progressive nature. Like poetry or theater, it may become easier and more rewarding to take in as it sheds the limitations of musical definition. However, it might take a certain frame of mind to reach those conclusions. That is to say, it’s not for everyone. The idea of music (and perhaps specifically ambient music) standing as blueprint for building a society may be seen as absurd by some, but at this point in time it’s an alternative that we might want to consider. Many of us have intense, inexplicable relationships with music that already help to shape our lives. We’re also exhausted by systems that have been put in place over years and years. Following the construction of more harmonious and well-balanced music collectives and systems might not be such a wild idea.

Reflection is available for you to listen to on the app or as a regular record.