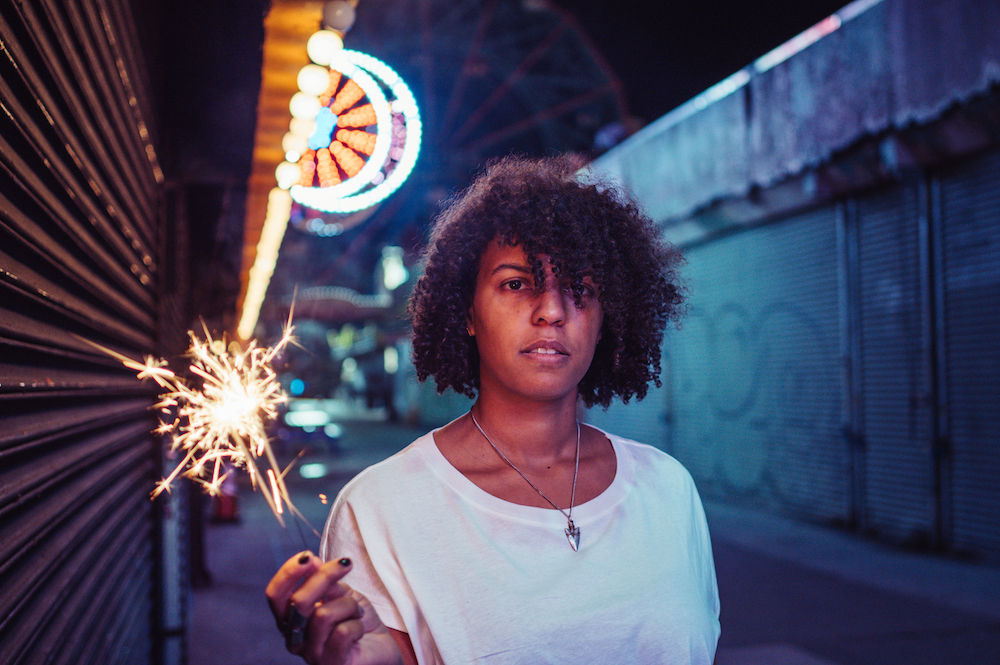 Oceanator is the Brooklyn-based solo project of Elise Okusami, who writes honest grunge-pop tunes that range from solo acoustic folk to synth pop. Okusami’s current live band includes Andrew Whitehurst and Anthony Richards, but her newest record Things I Never Said (released today!), also features performances by Eva Lawitts on bass and Mike Okusami and Aaron Silberstein on drums. Lead singles “A Crack in the World,” “Heartbeat” and “I Would Find You” have earworm qualities that belie their sonic heft. Though grunge is often associated with angsty feelings, Things I Never Said is actually comforting, with snippets of positive lyrical affirmations like “I’ll keep trying to keep the skies blue anyway.” The record was recorded at Wonderpark Studios by Eva Lawitt and Chris Kasnow and by Okusami’s brother in his studio in Maryland, and was released by Okusami’s new label Plastic Miracles. You can celebrate Oceanator’s record release tonight 8/28 on BABY.TV at 8pm EST! We chatted with Elisa Okusami about her Dead Kennedys cover, creating her own label, and her recommendations for must-download material for next Bandcamp Friday (September 4th).

AF: The first time I saw Oceanator was at Shea Stadium in fall of 2016 and you were completely solo. How has the project and your songwriting style evolved over the years?

EO: I miss Shea! I was playing a lot of solo stuff in the beginning because I wanted to get out there and play those songs, and I didn’t have any people to play them with yet. I still love playing solo for sure, but it’s very exciting to be able to play these songs big and huge with a full band. Andrew Whitehurst and Anthony Richards have been my touring bandmates for the past year and they’re amazing. I was also playing shows with Eva Lawitts, Aaron Silberstein, Zoe Brecher and a few other folks, and knowing that I had people I could ask to play shows I think made me feel freer to write songs for a full band and write less acoustic stuff, maybe? Not sure, I guess. I’ve always written both and I’m excited to get to perform both ways these days!

AF: Do you have a quarantine routine? Has lockdown affected your creativity in any way?

EO: I’ve been making cold brew coffee every few days – that’s about as much of a routine as I’ve got right now. In the beginning I was doing better with it and also doing walks and stuff. I need to get back into it. As far as creativity, I’ve been having an extra hard time writing lyrics. I’ve been writing a bunch of music, but any time I try to think about lyrics at all it’s this big grey blur.

AF: What are you most proud of about your new record and what do you want listeners to take away from it?

EO: I hope people take away a feeling of enjoyment and also a feeling of hope. I think the record goes through a lot of dark and heavy stuff, but I think overall it’s an optimistic record. That’s also why I ended it with “Sunshine,” because after all the disasters, etc, it’s like “Okay, we’re gonna be okay.” I’m pretty proud of the record as a whole, to be honest. I like the way it flows and I think these are some of the best songs I’ve ever written.

AF: How was recording your cover of the Dead Kennedys’ “Police Truck“?

EO: It was super fun! I did it at my brother’s studio and played all the instruments. I was having a super fun time just jamming on everything as we recorded. I was nervous about doing the vocals ‘cause Jello’s got that distinct voice, but I tried to just be me and I’m happy with how it turned out.

AF: What was the process like of creating your own label to release the album?

EO: Well, the label had been planned for a while, actually. I was always planning to launch it this year, and the original plan didn’t include me releasing any of my own music at all. Then I left the label I was on, so we were shopping the record around and with everything going on it was taking a while so we decided to self-release, and then I was like, well since I’m launching the label anyway might as well put it on that! It’s been a fun learning process. A lot of folks from other labels have reached out to offer to chat if I have questions, and that’s been super helpful. I’m really excited about the future of the label. We have four more releases coming in the fall and just put our first release of 2021 on the calendar.

AF: What is your favorite piece of Oceanator merch and how did you get the idea for it?

EO: I don’t know if I have a favorite right now! I’m very very stoked on the entire run of stuff I did around the record. I guess if I had to pick it would be the post cards or the temporary tattoos? The postcards were designed by Kameron White and the tattoos by Haley Butters and they’re both perfect. The post cards my friend Gretchen suggested doing. The temporary tattoos, I got the idea because I was thinking about what other fun ’90s stuff I could do since I was doing pogs. Temporary tattoos just popped into my head and I knew Haley had made flash sheets before so I asked them if they wanted to do the temp tattoo designs and they sent back this perfect thing with a tattoo for each song inspired by that song. It’s so cool.

AF: What bands/labels do you recommend to support on Bandcamp day next week?

EO: Solidarity Club, Grimalkin Records, Exploding in Sound, Quiet Year, Good Eye, Get Better, Disposable America to name a few labels. Cave People and Alright both also have records coming out this Friday so I would say pick those up. McKinley Dixon and Maneka are excellent. Artisan P has a new EP coming out on Sept 4th. I could go on and on but I’ll stop there.

AF: You’ve also drummed in various bands – are you still drumming in any projects or will you be in the future?

EO: I’m not actively right now because of the pandemic. Most of the drumming I was doing for folks was on tours, but yeah, I’ve been talking to some friends and I think if scheduling works out when touring starts again I’ll be playing some drums! I hope so. I miss the drums.

EO: Recently I have been doing the guitar through pedals just direct in to the mixer so I don’t bother the neighbors as much. At the beginning of quarantine I was mic’ing my amp but now that I’m doing more streams at later times and stuff, so I’ve been doing direct in and it has actually been sounding pretty great. Then I’ve got a mic for the vocals. Those both go into this little mixer, and I connect the mixer either to my interface and then into my computer or directly into my phone depending on what platform I’m streaming on.

EO: Mostly just seeing how things play out with pandemic and stuff. I don’t think shows will happen anytime soon which stinks. But I’m trying to stay busy. Got a bunch of things coming out on the label, so I’ll be working on that stuff. And I have a bunch of songs that I wanna work on for the next record, and also maybe an EP.