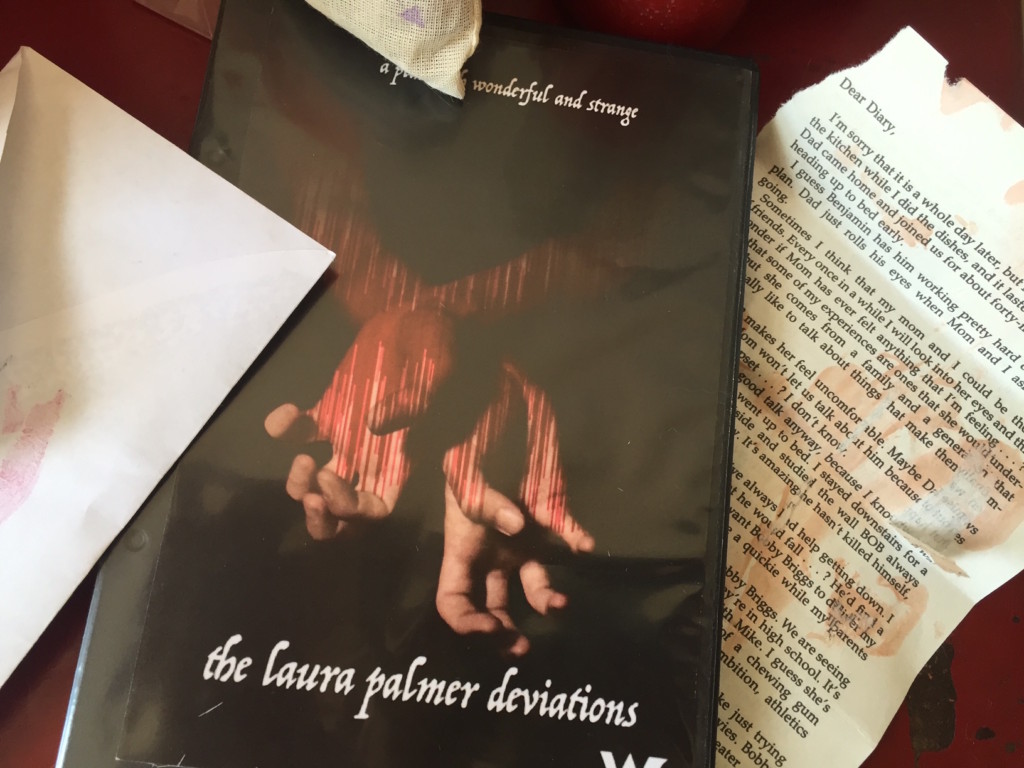 On Friday, August 19 at Brooklyn’s Morbid Anatomy Museum, occult-feminist-doom-gaze-dance-pop (possible the best descriptors in the universe) group A Place Both Wonderful and Strange released their new record The Laura Palmer Deviations in the form of a visual performance, featuring a bloody, beautiful, and naked (both in literally and in emotion) dancer. Married with the music and on-screen visuals, the dancer brought to life the presence of Laura Palmer.

In the basement of Morbid Anatomy, one of Brooklyn’s spookiest gems, the night began with a Twin Peaks lecture by Stefano Black, providing intellectual foreplay for the Lynchian night of terror, catharsis, and realization. A beautifully ghostly island of an album, The Laura Palmer Deviations is a record that is best enjoyed as independently as possible, although all of the the group’s releases are worthy of a listen. If you’ve missed A Place Both Wonderful and Strange’s visual performance of the album, paired with “lost/found footage, known snapshots, and ephemera,” please enjoy it from start to finish, allowing the noise to transport you to “the terrifying last hours in the short and tragic life of Laura Palmer.”

Formed by Russ Marshalek, in A Place Both Wonderful and Strange’s current incarnation Russ is joined by Shanda Woods, formerly of We Are The Wilderness, now solo under the guise of OKTI as a member of the Hathor Collective, and Laura Hajek, who also performs as “indie-pop terrorist” Edith Pop. Their newest record was recorded in a haunted fever in a shambolic cabin in upstate New York during a blizzard. In the best of ways, the ghosts present in that cabin inhabited the music, transmitting the pungent possession through the band’s live performance. By both sound and vision, the audience at Morbid Anatomy was transfixed. And, for the band’s experience of the night, read on.

AudioFemme: Tell me about the album, The Laura Palmer Deviations.

Russ: The record serves as a soundtrack-of-sorts to our audio/video/movement piece Keys Open Doors: The Hidden Life of Laura Palmer. After performing it many times, with each time being completely different, it just made sense to release a “version” of the “soundtrack”, as it is, since I’ve always considered our music to be soundtrack music anyway, very much sounds to put on in the background and then find yourself lost in. What became The Laura Palmer Deviations is actually a hybrid of four different takes of the performance, recorded in a suuuuuper haunted cabin in upstate New York in the middle of a blizzard in February. The sessions and the entire situation were incredibly intense and highly emotionally charged, and I feel like that comes through in some of the more punishing moments. Our friend and co-producer/mixer/masterer/general sound magician Bunny then took all the recordings and placed them against the video component and helped us stitch together the best possible audio story, and thusly the record was born.

How did the concept begin?

Russ: The Laura Palmer Deviations/the Hidden Life of Laura Palmer show came out of a Lynch Foundation commission for his Philly art opening, and it’s continued to evolve. The idea is “the last hours in the short and tragic life of Laura Palmer”, so there’s a LOT to unpack in there, in terms of black and white magic, abuse, familial structure, dissolving trust and finally imperfect redemption.

How does it differ from some of your earlier work?

Russ: Every APBWAS record should be treated as its own thing – by the time the first record came out we’d moved on to more longform noise pieces, and now that this is out we’re working on reining that it for more pop-oriented noise. I’m not personally very good at writing pop songs, but that’s where Laura and Shanda come in.

How is performance tied into the piece?

Russ: It’s an added facet, and one that’s pretty vital IMO. Whether it’s our dancer or what we’re doing, it’s all both tightly choreographed and completely different each time.

Shanda: I feel like it’s a very visceral expression of whats happening visually and thematically. Each time the performance changes depending on the energy of the day, or of the room, and I think that’s what makes this piece very unique and special. It’s a way of exploring anger, sadness, violence, regret, and all of the darker parts of our souls we don’t ever really want to look at, but are always present. And in that, a catharsis happens and I lose all sense of my physical self.

How did the concept for the release show come about?

Russ: Honestly, I can’t think of a better place to do this show at Morbid Anatomy. We try to be careful about where we stage the Laura Palmer show; it’s a complex piece of work, and not something we can just throw together at a dive bar in Manhattan on a Wednesday night. We’re really lucky Morbid Anatomy took the journey with us.

How did you think it went? The audience had a great time, what about you guys?

Russ: What a tough question. The show is intense, cathartic and really emotional, so I sort of never know “how it goes” I know we have a journey, and it’s a good journey to take, and we’ve worked hard to put it together, so I’m just grateful of anyone who accepts our invitation to come along for the ride.

Shanda: I had a great time as far as I can remember. I definitely cried, and a close friend said it was INTENSE. As a performer, if I cannot remember stretches of time, and am just left with a feeling of euphoria, I consider that a success. Not ever really sure how to gauge an audience response to something like this, but if they felt SOMETHING no matter what emotion it is, then we’ve done our jobs as artists.

Laura: The performance of The Laura Palmer Deviations at The Morbid Anatomy Museum was a great experience and the support and interest of the audience really resonated throughout the whole space. I wouldn’t necessarily call it fun as much as cathartic.

Listen to The Laura Palmer Deviations below: