Two nights into her support slot for podcast Welcome to Night Vale‘s U.S. jaunt last March, Eliza Rickman was en route to JFK and preparing to head home to Los Angeles. The COVID-19 pandemic had hit the United States, forcing the cancellation of concerts across the country. This tour was one of them.

The gigs in Massachusetts and New Hampshire had been solid. Some seats appeared to be empty, but the crowd had been enthusiastic and for Rickman, who hadn’t been out on the road in a year – that was important. “It gave me a little bit of a high or a boost, a little bit of a reminder of who I am and what I do before everything got shut down and I was going to have to be face the reality of touring not being a possibility for the foreseeable future,” the L.A.-based singer-songwriter says over a FaceTime call.

She might not be able to tour, but Rickman is continuing to perform through private webcasts. Early on in the pandemic, she had the opportunity to play two such shows for fans. In August, Rickman announced that she would be available for more and the offers started coming. “That felt really good and very life-affirming,” she says.

On the day she headed back from the Night Vale tour, things were looking different. The drive from Brooklyn to JFK was a fast one down an empty road. “When we got to JFK, there was no one being dropped off, there were no other cars at the airport,” she says. “I think that’s definitely when reality set in.”

Back in L.A., she decided to stock up on supplies, only to find out that there was little left on the store shelves. But, her parents were prepared and gave her the go-ahead to quarantine at their home near San Diego. “I stayed away from them. I didn’t pet the cat. That was torture,” she says. For the handful of weeks she was there, Rickman didn’t think about music either.

Not long into the lockdown, Rickman was approached by a fan to perform a cover of Blondie’s song “Call Me” for a work event via live stream. She was paid “a very generous amount” for a two-song set. Rickman set up a rig with her phone propped up on top of suitcases and boxes in front of her old piano in her teenage bedroom and played to a group tuned in from their homes around Milwaukee via Microsoft Teams. “That planted the idea in my head that I could do these regularly,” she says. After Rickman posted about the experience on social media, another fan – one in New Zealand – asked if she would live stream for his family, a gift he wanted to give his wife, who is a healthcare worker.

Touring has been a crucial part of Rickman’s career. She spent about seven years on the road, playing gigs for a string of months and then stopping in various cities to record music or crash with family and friends. While the constant touring ended when she resettled in Los Angeles in 2017, her love of live performance persists. “The magic for me is being on a stage and singing and speaking to an audience and having that interaction,” she says. “Their reaction is so huge for me – it’s like a big loop where I put a thing out there and they give something back.”

She’s the kind of performer who interacts with the crowd a lot; her between-song banter can be candid and very funny, more like what you would expect to hear at a party than in concert. Unsurprisingly, she’s played a good amount of house shows and that experience helped push her towards the private livestream model.

As is the case with so many musicians who are reliant on touring, the pandemic didn’t just throw a wrench into her plans, but slashed her livelihood. If the livestreams work out well, she’s hoping to be able to put together a home studio, which may be necessary in light of the social distancing efforts in Los Angeles due to the pandemic.  “I have to work within the confines,” says Rickman. “This is my answer to that, at least for the time being.” 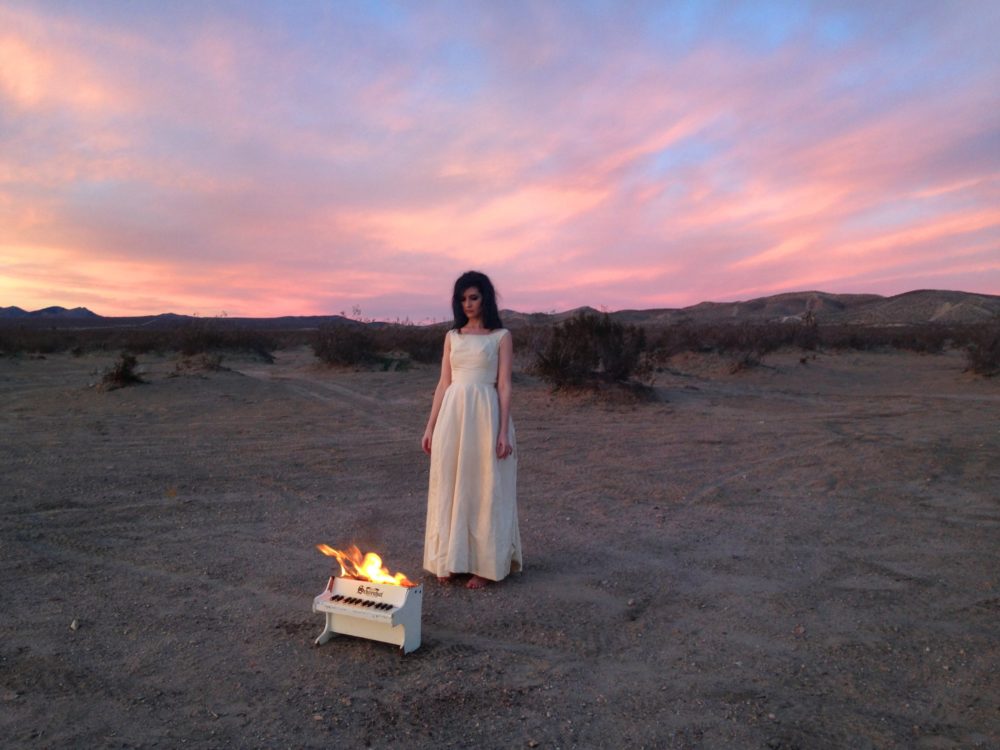 As a way of acknowledging that lots of people are going through tough times at the moment, Rickman made the concerts available for sliding scale rates. The rate may determine the length of the concert and what kind of songs. She has repertoire of roughly 25 original songs and 18 covers and says that there are other covers she may learn for the webcasts.

Within a few days of announcing her webcasts, Rickman’s calendar was already quickly filling. On her birthday, in mid-August, she played a surprise online party to celebrate one person’s new job. She also recently played a garden party in Germany via livestream and has booked virtual dates from San Diego to Ireland. Rickman may not be on the road, but she’s still playing the world.