Walking up to the MacArthur entrance of the 10th annual Burger Boogaloo festival was akin to walking under the big top of a circus tent, the everyday machinations of Mosswood Park suddenly swathed by a curtain of pounding drums as children twisted on swing sets, their caretakers snoozing on the roots of trees.

Festivals traditionally like to posit themselves as destination activities — off in the desert, hidden in the woods. But part of Burger Boogaloo’s appeal — and part of its enduring problems — is that its festival grounds perch directly in a city park, fences flung from end to end like the claws of a sun-drunk bird.

In fact, Burger Boogaloo’s grounds were drastically altered this year to try to avoid displacing the park’s extensive homeless population, a welcome move for coexistence that is still not without its limitations and inherent contradictions. Walking past the still-busy park playground as a stream of Betty-banged women in leopard print dresses exited from the festival grounds seemed symbolic of Burger Boogaloo’s precarious position: how do you host a large-scale music event that does not create an adverse effect on the surrounding community? While many festivals grapple with their environmental impact, Burger Boogaloo has to also consider the interweaving personal and political complexities of “taking over” a swath of public land for a fenced, ticketed event.

After I arrived, I stopped off at the booth of Punks with Lunch, a nonprofit organization that provides harm-reduction resources like needle kits and hygiene packs to marginalized communities in West Oakland and beyond. The two volunteers working the booth told me that Burger Boogaloo had explicitly contacted them for advice on how to work with the homeless population. In the past, they said, the city would do “cleanups” of the park in advance of the festival, essentially a nice way of saying they would throw away all the homeless residents’ possessions, displacing a community that is also one of the few sources of consistency in its residents’ lives. No one, as far as they knew, had been displaced this year, but they were waiting for more information. I thanked them and moved towards the beer tents, standing on my tiptoes to try and spot those tell-tale domes of blue tarp that would mark the still-standing encampment. I was too far away, so I sat under the shade of a solitary tree and scanned the grounds, ready for some people watching in advance of the next set.

Bettie bangs abounded across festival grounds, and I was texting my friends to make a joke about it when I saw the booth sign: FREE BANGS, it read. I put the phone away. Why make a joke when everyone knows the punchline? 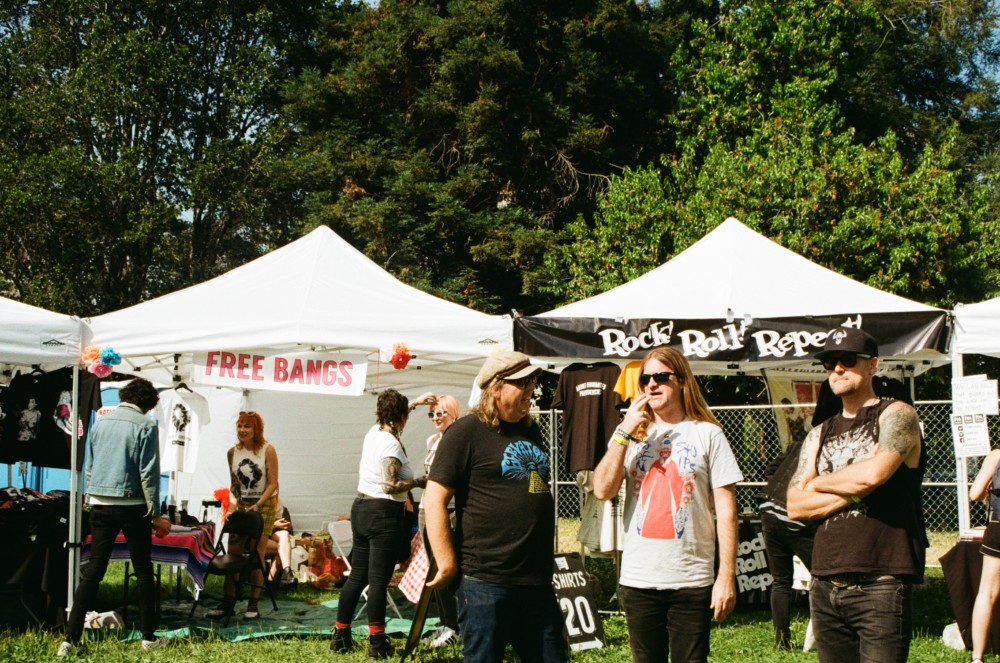 There is a flippant sense of self-awareness to Burger Boogaloo, a sort of self-effacing chuckle that seems to permeate the back end of the grounds where festival-goers fling themselves down in the grass, sweating through black clothes, fingers oily from pint-size tacos. While the crowd is fairly diverse, especially terms of age, the booths sit firmly in Punk Summer Camp; Punks with Lunch was joined by Amoeba Records, 942 Gilman, and a variety of clothing shops and small record labels with chunky paper-mache signs and vinyl records stacked inside plastic postal service boxes, tents ringing the grounds like a goth tiara.

“You have to cut your own hair, or its not choppy enough,” the woman lighting a joint next to me said. Me and my expensive haircut read this as my cue to venture to the stage.

The first performance I saw was Phantom Surfers, a five-piece band from San Francisco who play largely instrumental covers with a (you guessed it) surf-rock bent. They performed in spangled pink blazers and weirdly petite black eye masks, a combination that was particularly, delightfully strange on their main singer, who also had what I believe to be a very real silver-haired bob. The audience, while slightly befuddled, very much enjoyed it, including the two adolescent boys who stood in front of me for a few songs, one wearing an actual industrial chain as a necklace, snipped short to fall past his collarbone.

Next up was San Francisco punk band The Dwarves. “I’d love to see their penises, and you will too,” host John Waters said (warned us menacingly?) during his introduction. A long-time transgressive filmmaker and comedian, Waters’ unconventional intros were much loved by the audience, though I wish he had stuck around to provide more active commentary after each set. He ended his bit with a request: “Put your grimy little paws together and give a hideous welcome to The Dwarves.” The audience gladly obliged, and thus began my favorite performance of my time at the Boogaloo.

It was, a bit, like what I imagined Warped Tour would have been like in the realms of my adolescent rose-colored dreams. Because of the diverse audience, the pit was sparse but spirited, with people in their teens to fifties dancing like mad, their bodies flung along the rapids of the pit’s golden spiral. It was a welcome reminder; while I may feel like I have reached the apex of my music taste, watching the woman in front of me in her early forties contain the edges of the pit with good-natured shoves reminded me how relatively brief my relationship with punk music has been — and how much I have yet to learn.

“This is the best festival in the fuckin’ world ya’ll bitches!” cried The Dwarves frontman, Blag Dahlia. This was pretty standard-issue for the whole set, and for the most part, I didn’t mind. But like I mentioned in last week’s article about Kevin Nichols, hearing old-fashioned punk sentiments as delivered to a new audience can be off-putting. I felt it most when Dahlia declared “I think we need some sluts!” to welcome a few of the festival’s on-call dancers, one of whom had appeared with the Phantom Surfers as a sexy cavewoman. This is where things always get tricky for me. Offensive, inflammatory, and just downright backwards lyrics and behavior from punk bands was pretty standard during its heyday, but the actual reasoning behind those choices was wildly variable — satire at best, genuine belief at worst, and monkey-see, monkey-do bullshitting in the middle. It can be difficult to ascertain, as a fan, where a band lies on this scale. Plus, as a woman, it can just be exhausting. Someone can tell you, time and time again, that it’s satire, poking fun at people who “really” think like this, but sometimes it just doesn’t matter — words with damaging, misogynistic connotations delivered with glib glee by older white men are sometimes just that: damaging. 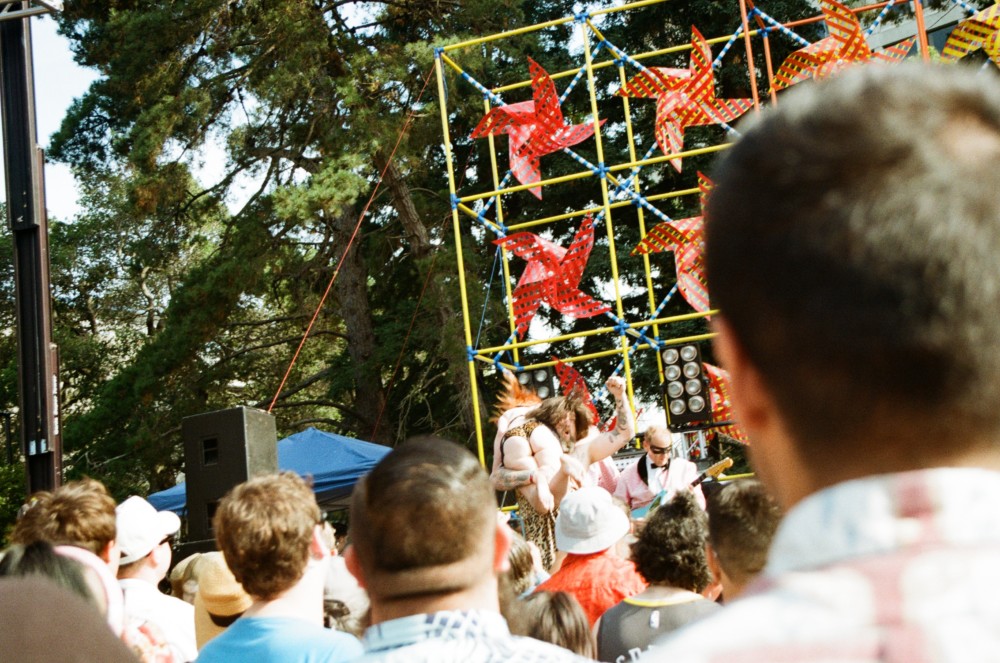 But sometimes, it’s just not worth it to be offended. During “The Dwarves Are Still The Best Band Ever,” I strode away from the stage during the chorus: let’s just get high and fuck some sluts! But here’s what happened when I went home later and looked up the bands I saw: I found myself cackling at the studio version of the song, which begins with a disconcerting after-school special sing-song: to save the ozone and the earth/and all the creatures, sand and surf/the world is full of things to do/and yet it always comes back to—

Am I interpreting the song correctly? God, I have no idea. But I’ll take it.

Next up was The Dead Boys, a Cleveland band that had its heyday in the ’70s before reforming in 2017. I didn’t watch directly for much of this set, instead choosing to meander through one of the VIP sections, where I caught a side view of vocalist Jake Hout (replacing original frontman Stiv Bators, who passed away in 1990) getting lifted up by the crowd by his feet and ankles. Astride a sea of bent wrists, he delivered a few verses with remarkable balance, his black-rimmed eyes tipped to the sky, a punk-rock Cleopatra.

Rounding out the festival was two-night headliners The Jesus and Mary Chain, a Scottish rock band formed in 1983. With the sun disappearing fast, the upgraded stage and light effects made quite the impression on the small festival grounds, with smoke pouring into the sky like a rock n’ roll bonfire. Leaving the last few songs for the fans, young and old, who bounced on their heels, singing along in the dark to brothers Jim and William Reed, I followed the small trickle of deserters back to MacArthur Boulevard.

Outside the gates, a man sold Street Spirits. I bought one — the International Issue. “How do you feel about the festival?” I asked him.

“The coordinators are full of shit,” he said. “They displaced us.” He pointed past me to the area of the park on the opposite side from where the untouched tents still resided, telling me they had made him move. So Burger Boogaloo has not quite reached perfect harmony with the residents of its favored festival grounds. Frankly, I don’t know if it’s possible —  you can’t expect marginalized people to consider, year-round, the convenience of one forty-eight hour event. The only solution is more work — more education, more negotiation, more adjustment — or finding a different venue altogether.

While Burger Records is a SoCal label, this festival’s decades long connection with the Bay Area is something to be celebrated — there is a reason it started here, and a reason it wanted to stay. I saw that, easily, in the crowd — two kids dozing between sets, an open book sliding down one of their laps; a woman with a gray beehive hairdo herding her grandchildren for a photo; a lithe dancer in the pit ending a song on a deep backbend, her afro bobbing as her hand cupped the sky. But the homeless are the Bay Area, too, and there is more than can, and should, be done to watch out for them.