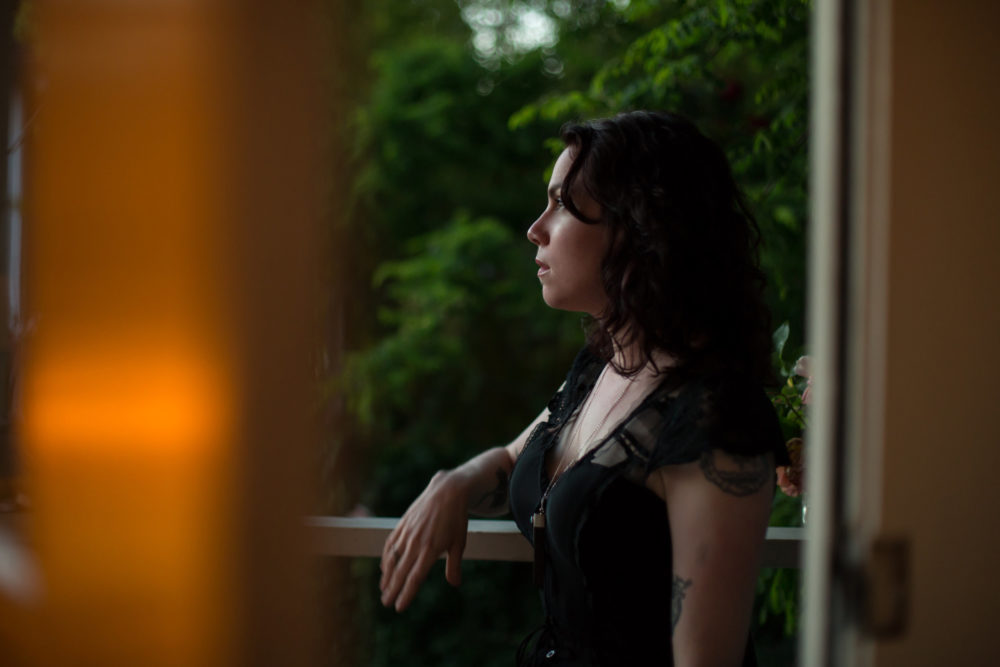 Until three years ago, singer-songwriter Caitlin Sherman’s musical career in Seattle was always attached to one romantic partner or another. For seven years, she was married to local Seattle guitarist Jason Goesl, and for nine years the two performed together as Slow Skate. After the two divorced, Sherman met and began dating musician Hart Kingsbery, and they began western-psych outfit, Evening Bell. For four years, Evening Bell’s regional notoriety mounted; they filmed a Band in Seattle segment, played a KEXP in-studio, and were asked often to open for notable contemporaries, like Wanda Jackson. But when Sherman and Kingsbery’s romantic relationship came to an end in 2017, Evening Bell, and much of what they’d worked for, came to ashes with it.

Sherman calls losing her romantic partner and her band at the same time “devastating,” and joked that trying this method twice might be “the definition of insanity.” But, this last time, she didn’t stew for long.  Even before Evening Bell had completely disbanded, Sherman went to Nashville for the annual Americana Festival, and the experience confirmed that she was a music “lifer.”

“[I realized] I have to figure out how to keep doing this—because the bands that I had and the relationships that I had didn’t work out—but this is what I do. I borrowed a guitar [in Nashville], and wrote [the song] ‘Death to the Damsel’ in pretty much one sitting.”

This song would become the title track to her first solo full-length,  Death to the Damsel, due out February 14th, 2020 on the label Small Batch Records. Personnel, both on the album and live setting, include Jason Merculief on drums (J Tillman, Jesse Sykes & The Sweet Hereafter, Alela Diane, Sera Cahoone), Bill Patton on guitar (Fleet Foxes, J Tillman) and Jesse Harmonson on bass (Jaime Wyatt, The Crying Shame). Along with writing the songs, Sherman plays piano, guitar, and sings on the album.

“There was the strength to [“Death to the Damsel”], like ‘no more of that.’ I don’t want to say it’s a jab at myself, but it’s giving myself a good talking to,” Sherman said. “You were complicit in conforming to traditional roles that relationships entail and slowly lost [yourself] in it. Nope, we’re done with that.”

Death to the Damsel is a strong, what-we’ve-been-waiting-for kind of debut. Though Caitlin’s voice was undeniably a part of her previous collaborations, up front and out from behind her exes is where Sherman’s songwriting prowess shines.

Today’s single premiere, “Find Me A Fire,” is a perfect example of this album on a whole. Empowering and frankly personal, it makes peace with the difficult decision to leave her ex-husband, and with the painful life lessons we must learn (and sometimes relearn) until they stick. The song plays with the image of a house on fire—a nod to Sherman’s Sagittarius nature—and this Tennessee Williams quote she’s always loved: “We all live in a house on fire, no fire department to call; no way out, just the upstairs window to look out of while the fire burns the house down with us trapped, locked in it.”

Lyrically, Sherman challenges the conclusions of the quote in the song, determined in finding a way out and rebuilding. A calming, almost-familiar piano-driven progression pushes the song forward, resulting in a highly-listenable anthem of self-empowerment. “It all kind of came together as I think just that kind of feeling of ‘Okay, I’m going to be the one to pull the rip cord,’” Sherman said. “This kind of solution-oriented [feeling], like ‘No, I’m going to find a way to get out of it.’”

She’s out of that house now, and now there’s a different kind of fire burning under Sherman. Though she admits it’s scarier to write and perform under her own name, she also admits it means she’s finally getting her due. People have continued to ask her to open for them, sans the rest of Evening Bell, and those who’ve heard the early tracks of Death to the Damsel have approached her with a new perspective on her talent.

“It’s a weird sort of compliment, but so many people who knew Evening Bell [and have heard my new work] are saying, ‘I’m so sorry, I thought it was Hart the whole time,’” said Sherman. “It’s a programming thing—if a man and woman make music together [it’s assumed] he probably wrote the stuff. We both wrote.”

On Death to the Damsel, with her well-crafted songs and musical talent as the centerpiece, there’s no question she’s a formidable tour de force. The confidence and resilience that radiate throughout this deliciously tender debut mark an exciting new phase for Sherman—and her listeners.