Rarely a night goes by in Bloomington without locals filling the basements of show-houses, bobbing their heads to punk, garage, and grunge riffs. Once a month, Rebecca recounts some of the live music highlights from the previous four weeks. Read and listen below for a bevy of Bloomington bands that should be on your radar.

It was an evening of farewells at the Bishop as locals Rich Boy Junkie and Her Again performed their final shows in Bloomington. I arrived at the Bishop in time for Her Again’s set, where a substantial audience showed up to catch the doo-wop infused surf punk sounds of Claudia Ferme (guitar), Jordan Gomes-Kuehner (drums), and Megan Searl (bass), who traded in their typically deadpan delivery for visible emotion as they graced the a Bloomington stage together for the last time. Rich Boy Junkie, the indie synthpop outfit featuring Collin Thomas, Brian Berger, Cole Stinson, Sam Winkhouse, and Nick Kinney, closed down the night. In between intimate lyrics sung with an earnest sincerity, frontman Collin Thomas took time to thank the band’s supporters and reflect on the special place that Bloomington will have in their memory.

*This review was written by Jennie Williams, a friend, colleague, musician, and fellow local music lover*

The Void, Bloomington’s all-ages collectively operated venue, sold out its largest show yet on Saturday, August 5th. This highly anticipated event featured Jeff Rosenstock and Laura Stevenson, old friends and bandmates from Bomb the Music Industry! (BtMI!). They had been touring all summer together with their own self-titled projects. Pre-sale tickets to this show were not available, which meant that even though I thought I showed up on time, I was already late and at the end of the line.

The first band to perform was a local punk group called Whelmed (an appropriate name to kick off the eagerly awaited and nearly overwhelming event). The lead vocalist welcomed the audience and introduced The Void and its mission to the crowd, which consisted of people from in and out of town. I even overheard that someone drove for over an hour and a half to see the show.

Laura Stevenson performed next, opening with “Out With A Whimper” from her 2015 album Cocksure. Stevenson was friendly, funny, attentive to the crowd, and played electric guitar with an effortless talent as she sang out devotedly over the sound of the loud speakers. For her last three songs, Jeff Rosenstock joined Stevenson on stage and played a shredding electric lead. The band closed with “Jellyfish” – an instant crowd favorite.

While the Jeff Rosenstock fans pushed forward, readying themselves for the headliner, I went over and introduced myself to Stevenson at her merch table. I bought a t-shirt and we talked about an Elliot Smith cover song she played two Christmases ago and our mutual love for Dolly Parton. Rosenstock fired up the crowd that became a chorus of voices singing every word to his songs. Rosenstock praised the audience for being respectful to one another and thanked the Void for hosting this successful and memorable night.

The Jan’s Rooms crew stacked the lineup for the final show at one of Bloomington’s most popular house venues. Eager to catch the entire bill, I arrived in the basement in time for local punk band Laffing Gas’s opening set. Although I instantly regretted my oversight in not bringing earplugs along, the infectious energy that emanated from the frenzied instrumentals and fiery vocals made the minor physical discomfort worth it. The second act of the night was Twinso, an Evansville-based hardcore punk duo. Donning matching jumpsuits and orange hats, Twinso visually referenced a Devo aesthetic during their performance. The true surprise came when they began to play their instruments, juxtaposing a whimsical visual with heavy sounds: explosive bass lines and wildly accelerated drum fills.

DC-based hardcore punk quartet Iron Cages came through for the penultimate act of the night. During yet another heavy and energetic set, vocalist Laura danced in the crowd while instrumentalists Brendan, Joey, and Nate thrashed around onstage. Lastly, local DJ Beverly Bouncehouse facilitated a charming end to the night, singing an eclectic and hilariously curated playlist of covers (“Short People” by Randy Newman and “Sweat” by the Inner Circle were definitely set highlights) on top of the songs’ original backtracks. It seemed fitting to end the house’s final show with a reminder that above all, Jan’s Rooms was a venue for old and new friends to connect to each other and have a good time. 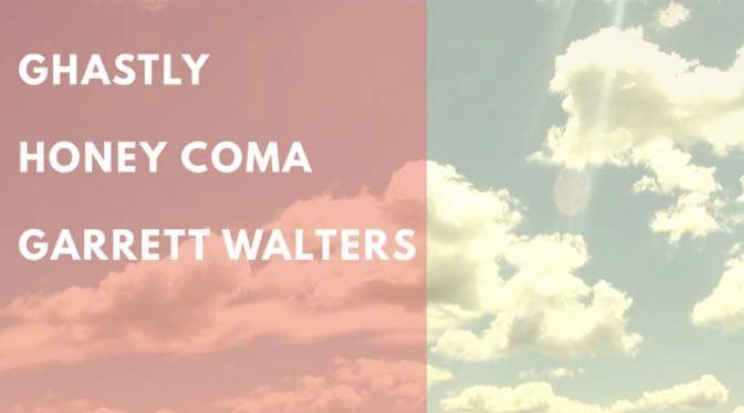 A couple of months back I picked up Garrett Walters’ debut album, I Call My Younger Sister Twice A Day. For some reason I was intrigued by the album art so I decided to take a risk. While you can’t always judge a book by its cover, you might be able to judge an album by its cover art because I Call My Younger Sister Twice a Day played on repeat in my car for a good month or so. Walters’ live show was just as intimate as the recording itself; as the audience formed a semicircle surrounding the singer, who stepped down from the stage to get a little closer to us all, we were treated with a smattering of personal folk punk songs about the good, the bad, and the ugly of life and love Bloomington.

After moseying over to the Bishop from the Void (thankfully Bloomington is relatively small and easy to get around fast), I made it to Amy O’s Elastic release show just in time for the last few songs of Jacky Boy’s set. The room was already packed for the best turnout for a local show that I’ve been to all summer. After grabbing a drink and worming my way through the crowd, I climbed up onto a booth to catch the sludgy yet melodic basslines and nonchalantly slacker vocals of the local grunge outfit Bugg, who was the second supporting act of the night.

The mood was high by the arrival of Amy O’s much-awaited set. She performed most of the songs off of Elastic, which was released earlier this month via local label Winspear. This was Amy O’s return home after a midwest and east coast tour and the tone felt celebratory. In between exchanges with the audience and smiles to fellow bandmembers Madeline Robinson (bass/vocals), Justin Vollmar (drums), Damion Schiralli (guitar), and Aaron Denton (keys/vocals), Amy O delivered a substantial set of tightly composed grungy basement pop. 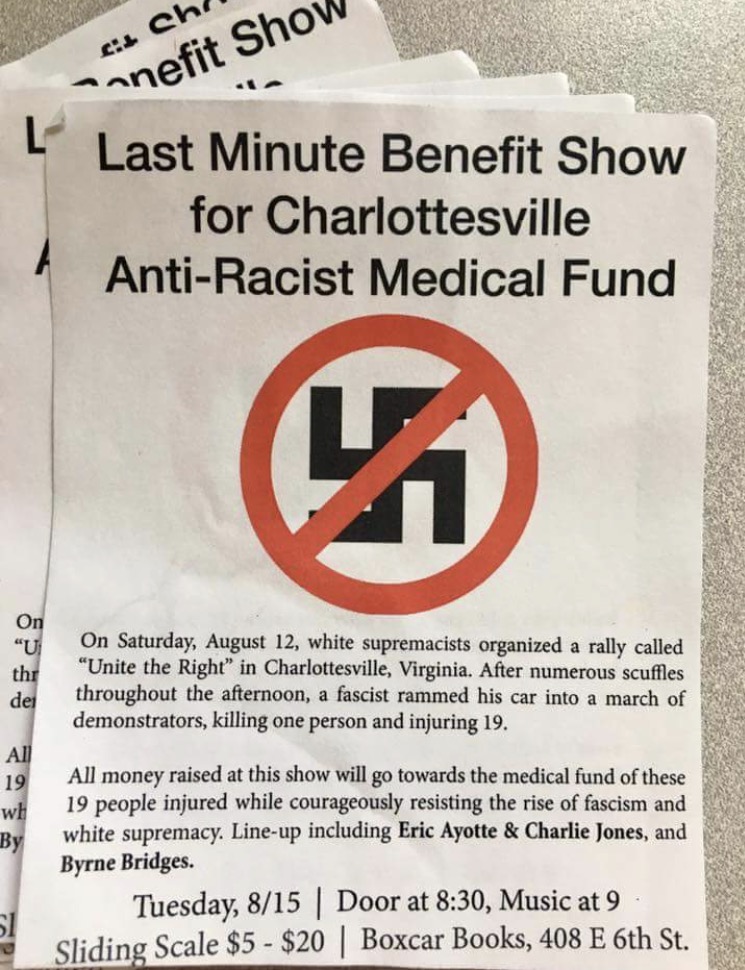 Punks Give Back Bloomington hosted a last minute show at Boxcar Books, Bloomington’s local volunteer-run bookstore and activist center. The event, which featured Eric Ayotte and Charlie Jones, Byrne Bridges, and Fresh Kill, raised over $1000 to assist with medical expenses for the anti-fascist protesters who were attacked and injured by white supremacists in Charlottesville on August 12. While the atmosphere felt understandably somber, Boxcar’s comfortable and inclusive environment became a space for people to come together and begin to process their feelings.

Fresh Kill opened the night with an acoustic set once the audience settled down onto the floor. While I’ve seen these two perform quite a few times in the months since their debut, this more intimate and unplugged version of Fresh Kill provided the space for Jess (drums) and Emma (guitar) to showcase their poignant lyrics and tight vocal harmonies. The next act to perform was Byrne Bridges, a solo project that combines elements of glam and folk punk. Their set included collective moments of catharsis, including a song/social experiment where audience members were given the space to take the stage and offer things that they are sorry about while crowd sang along. Unfortunately I couldn’t stay for the final act, but reports back from people there confirm that Eric Ayotte and Charlie Jones are certainly worth keeping an eye out for more performances to come.

I walked into the basement of the Blockhouse just in time for the psychedelic dream pop stylings of LadyCop. LadyCop is an eight person project headed by Chelsea Sherman (vocals, keys, synth, percussion) and is comprised of Alex Arnold (guitar, bass, synth, percussion), Kenzie Main (vocals), Biz Strother (vocals), Jonathon Brunnes (bass), Josh Morrow (drums), Charles Roldan (drums) and Patrick Hitchings (violins). While not all eight member of the project were present at this live show, a fullness in sound was provided by the three-part vocal harmonies, one of the core identifying features of Ladycop’s sound.

Finishing the night was Tabah, a Minneapolis-based five piece comprised of Cecelia Erholtz (vocals/guitar), Charlie Bruber (bass), Murphy Janssen (drums), Jeff Ley (guitar), and Andrew Seitz (keys). While psychedelic undercurrents ran throughout the band’s set, Tabah draws from multiple sources. Utilizing elements of folk, country, soul, funk, and hard rock, their music is delightfully difficult to pinpoint in any one genre. One common strand that ran throughout their set, however, was each member’s proclivity towards their instruments. As these elements came together onstage, Erholtz’s soulful vocal timbre weaved into the sonic tapestry with apparent ease.

The Root Cellar opened up its doors on a Sunday night for a stacked lineup of local and touring punk music. Kicking off the night was the Bills, a brand new local group. A substantial crowd had accumulated to support this power punk trio, who played a short and sweet set of original tunes. New Orleans-based post punk four piece Casual Burn was the second act of the night. Hopping on the lineup last minute, the post-punk stylings of Monet Maloof (vocals), David Sabudowskly (guitar), Nathan Bluford (drums), and Carlos Knoop (bass) were a welcome surprise. The energy emanating from this group even prompted a small moshpit, a fairly uncommon occurance in Bloomington, where most punks prefer bobbing their head subtly to the beat over heaving their bodies in any which direction.