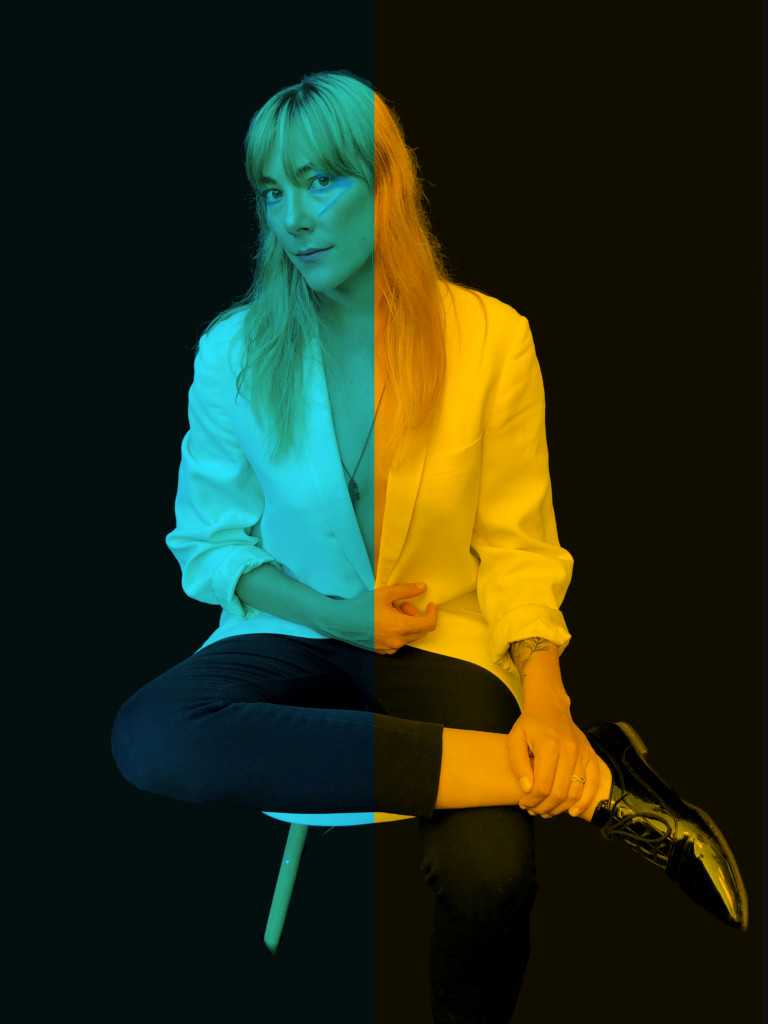 You know you’ve struck gold when a song is as thought-provoking as it is catchy, wrapping a universal millenial lament in twinkling synth and a beat that’ll have you reaching for your dancing shoes. Witty, wry, and sharp, Atlanta singer-songwriter Julie Slonecki does just that, sharing one of my favorite songs of the summer, “88,” and a brand new stunner, “Recipe.”

Slonecki has a long history in the music biz, with several albums and side projects under her belt. Releasing this pair of stand-alone singles is a bold move meant to escape the monotony of a typical album cycle, but there’s an unintended effect, too – both “88” and “Recipe” have a self-contained, ecstatic sort of energy unhindered by the surrounding filler of an LP. “Recipe” is a sunny, straightforward crush song, while the nostalgic vibes of “88” belie its existential themes.

We sat down with Slonecki to discuss her musical muses, her plans for the future, and of course, her place in the Atlanta scene.

AF: How did you get into music? Were you raised in a musical family, or was it sort of the rebellious thing to do?

JS: My parents actually met in the marching band in college, and then later on played in a cover band on weekends together, so music definitely was always part of the family fabric. I did satiate my rebellious side by picking an instrument neither of my parents were pros at, the guitar. Even though my Mom is a world class pianist, I brilliantly decided to not take advantage of that, and to instead forge my own road as a guitarist and singer-songwriter.

AF: Was there a moment where you realized “Oh, this is what I want to do as a career,” or was it something you knew from the beginning?

JS: I think a lot of kids have dreams of being rock stars, which are then quickly pushed out by society telling us that we need to have “real” careers. I always knew I had an interest in music, but it wasn’t until I got to college that I realized how truly happy music made me. I joined choirs and started a few bands, and eventually abandoned my sensible plans of a “communications” degree and instead graduated with an ever lucrative BA in Music Composition. After school was when I started figuring out what making money with music meant, and it’s by no means easy, but it’s also more fun than any other job I’ve seen or had, and I’ve had some very random jobs.

AF: Who do you consider your greatest musical inspirations?

JS: For me, the first great inspiration of my young songwriting career was Jenny Lewis (formerly of Rilo Kiley). She was my first modern example of a badass female leading a band, writing her own songs, and crushing on stage performances. Before that, all my favorite singers/band leaders had been guys, and she made me realize, hey, I can do that too. She also just had an effortless cool about her that high school me wanted to emulate.

AF: Can you tell us a bit about your writing process? How has it evolved since you started writing your own music?

JS: I’ve always recorded my own music, from day one actually. In high school, I dug out an old Tascam 8-Track tape recorder my parents had from the early ’90s, along with a couple of dusty microphones, and set to work. I then of course took those tapes and paraded them around in a boom box during lunch period, something I know my friends and classmates must have loved. Since then, my love for recording and production has grown so much, and I think I know quite a bit more now of course, but from the beginning I’ve always recorded my songs as I wrote them. In fact, my songwriting process is generally very quick; I typically sit down and will have a somewhat fully formed song done in just an hour or two. I’ve always worked that way. I’ve also self-recorded and produced all three of my albums (one under “SLONE”) and of course these two newer singles as well. It’s sort of a maddening process to do it all yourself, but I also love it, so maybe I have a problem.

AF: What inspired your latest singles?

JS: “88” sort of just came out in one forty-five minute burst – me sitting in my home studio, whisky in hand. I think it was a culmination of feelings about the state of the world and the invisible pressure that I sometimes feel about my generation having to try to fix the mess we are all in. And a lot of times, it just feels like way too much for one snowflake millennial to handle. I think it just felt good to confess some of those thoughts I had been having – that as one individual, do I even have the ability to impact these large than life issues? And is that pursuit worth it if the cost is having to give up things in life that make me truly happy (i.e. music)? For now I will just keep writing music, and hustling, and make sure to vote this November.

As for the new single, “Recipe,” it was inspired by meeting one of the most wonderful, funny, and devoted humans, my girlfriend. It’s about that first feeling that rushes over you when you meet someone you know is really worth the time.

AF: You’re working on a bit of an experimental model, releasing a single every month rather than the more typical album format. Do you think it will impact the music you make, since you can write and release something in a more immediate, here-and-now period of time?

JS: While it does enable me to perhaps write, record, and release music in “record” time, it actually wasn’t the original intent. “88” actually did sort of happen that way, but I have a huge back catalog of unreleased songs that I plan to put out using this very state of the art technique. I think it actually came down to that fact that it seemed far easier than the task of mixing, mastering, doing the art, and promoting a whole record, especially while juggling everything with my other band, Sexbruise? (a comedy based, satirical, and dancy-as-hell project), as well as my financially necessary day job/side hustle. And I figured, why the hell not, might as well mix it up.

AF: You released your debut record seven years ago. How have you evolved as a writer and performer since then? What do you think has stayed the same?

JS: I think as a performer I have really continued to grow, and feel far more comfortable in my own skin on stage. I give myself much more freedom, and I try to be forgiving of my own mistakes, although that last part is still hard for me. I’m definitely my own worst critic. If I’m being honest, as a songwriter, sometimes I think that my work shows the overall trend of shortening attention spans in society. I find myself writing super short songs, no longer blabbering on poetically as much as I used to. I think part of it is that I’m not often setting out to write solo acoustic guitar songs anymore, but maybe the internet is rubbing off on me too much, who knows. As for what stays the same, I actually can’t always tell, and just the other day I started a song on the very topic: “How many people have I been? I feel like I borrowed this body from them.” Sort of how I feel sometimes, you know?

AF: Why do you think that people connect so strongly with you and your music?

JS: Well it’s certainly not because I’m a much stronger and more sophisticated writer than Shakespeare (which I am) but rather that I think people are looking to hear something familiar, something maybe they themselves have had vague thoughts or feelings about, but never quite put into words. Or maybe they just love dope beats. It’s true, people really love it when you drop the beat, and then pick it back up. But truthfully, I’m not sure why. I think I make music that I enjoy, that really makes me happy, so my best guess would be that if it does that for me, it probably has that effect on other people too.

JS: My greatest victory was winning seven Grammys in 2013. My greatest challenge was having to accept that I hadn’t actually won a Grammy and that I instead was late to a job that I hated. I think it’s such a challenge to be an independent artist these days because there has never been a time with more competition. Artists have never been more awash in a never ending sea of new songs, videos, art, events, press, and especially pet rescue videos. How are we supposed to compete for viewership and engagement? That’s the unfortunate reality of the music industry right now: social media is king. I know I myself am guilty of skipping over things that other artists may have poured countess hours into, just to watch a video of a tiny kitten drinking milk from the hands of a monkey. If I do it, I know other people do too, so that can be disheartening as an artist for sure, but…hey, I still love it. I just don’t take lack of engagement so personally anymore.

JS: Even though I’ve lived here for the last few years, I feel like I’m still not truly connected with the scene here. I think it’s so spread out, just like Atlanta and all its suburbs, and that can make it hard to meet the right people. That said, I have been lucky to meet some really excellent musicians here, and that has made it worthwhile, though playing in town has its challenges. In my limited experience, Atlanta can be a difficult place for small artists to find success. You are constantly having to compete with big ticket acts, no matter the night of the week; it’s just the nature of a bigger city. We do have some great large capacity music venues here, which are awesome for already nationally touring acts to come through (and great for fans), but not so great for the Average Joe just trying to sing Original Joe songs. I wish I had had that insight earlier on. Since moving, I have kept my contacts and friends from my hometown, Charleston, SC, and play there often.

AF: What’s next for you?

JS: Even though I’ve been releasing music of my own, I am also releasing an EP and music video with my other aforementioned band, Sexbruise?, at the end of August, which is very exciting. Who knows, maybe it will win us an actual Grammy. I plan to keep releasing music over the next few months, and see how that method works compared to a full album release, but mostly I just plan to continue to perform live, and have a blast doing it. I think as long as I’m having fun with it, I’ll keep at it, and beyond that, who knows what will come of it (fingers crossed though for fame and wealth).