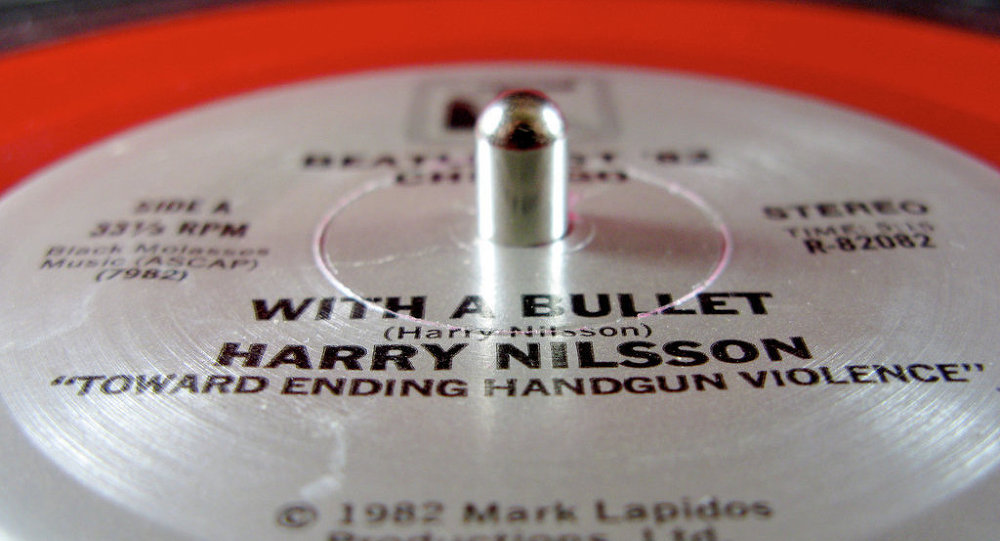 Last week, after publishing “Don’t Take Your Guns to Town,” I took the train across the East River to see a movie. A bit of distraction seemed necessary in that moment, even if it was in the form of a demonic clown named Pennywise. Sitting on the Manhattan-bound C train, I noticed a man in a grey flannel suit to my left. He, like most modern passengers, was fixated on his smart phone. The glow of its screen did not reflect Candy Crush, Snapchat, or Instagram, however, but a P.O.V. shooter game. The tap of his thumb did not cause hearts of affirmation to burst with confetti, but rather, launched bullets from a high-power rifle, bumping off “bad guys” one by one. I watched as my well-dressed neighbor selected guns, tightened his scope, and fired and rooftop gunmen.

At that moment, it had only been four days since the mass murder of festival goers in Las Vegas, and seeing any gun, whether real, toy, or two-dimensional gave me a swift kick of nausea. It goes without saying that the events that plagued Las Vegas on October 1st still plague us today, and will continue to do so – and it is because of that lasting sickness I write on this topic again.

There were a lot of things that didn’t make the final draft of last week’s Only Noise, in part because I felt there was a hierarchy of importance with certain details – namely pointing out the arcane excuses for assault rifle-ownership in America. What I did not have the word count to include, were profiles on the scores of musicians who have had the guts to protest groups like the N.R.A., and ideologies which uphold the mass armament of US citizens with little to no discernment.

Artists like Harry Nilsson, who, after his best friend John Lennon was murdered by a crazed fan with a .38 revolver, became the official spokesperson for the Coalition to Stop Gun Violence (CSGV). In 1981, a year following Lennon’s death, Nilsson told the L.A. Times, “I’ve never been an activist before, but when I was one of the people who had to hold Ringo’s hand after John Lennon was shot, I became involved. I said to Ringo one night just after the shooting, ‘If I could take this from you, I would. But I can’t.’ I was helpless, and that was the worst time in the world for me.” Nilsson’s life work became twofold: music, and gun control. Eventually he became National Chairman of a campaign called End Handgun Violence Week, which ran between October 25th and October 31st in the early 1980s.

247 people have been fatally shot in this country in the 10 days since the Route 91 Harvest Festival. Perhaps the CSGV could bring back End Handgun Violence Week, although the public faces far more frightening weaponry than just handguns these days.

Despite her recent op-ed in The New York Times, Roseanne Cash is no rookie to the gun control debate. Her activism traces back twenty years. She spoke out in 2015, when a gunman at Umpqua Community College in Roseburg, Oregon killed nine people. This tragedy coincidentally occurred on the first of October as well – two years to the day before Stephen Paddock wreaked death on Las Vegas. The day after the 2015 attack, Cash urged citizens to sign a petition to reinstate the 1994 federal ban on assault weapons. “If you are as sick of gun violence in this country as I am,” the country artist wrote on her Facebook page, “then let’s stop talking about it and just do ONE simple thing.”

Unfortunately, this ONE simple thing has not appeared so simple to lawmakers. The 1994 assault weapon ban was never reinstated. Assault weapon opposition does continue to grow, however, especially after so many lives were lost at the Route 91 Harvest Festival. Guitarist Caleb Keeter of Josh Abbott Band was one of the first country musicians to completely alter his stance on gun ownership in this country, after the massacre in Las Vegas (he was at the festival when the shooting occurred). “I’ve been a proponent of the 2nd amendment my entire life,” Keeter wrote on Twitter the day following the shooting. “Until the events of last night. I cannot express how wrong I was.” He added, “We need gun control RIGHT. NOW.”

Unfortunately, there hasn’t been a long list of country musicians who have done a 180 on their firearms position since the massacre – but a few do seem to be distancing themselves from the NRA. On October 2nd, the artist roster on the website for NRA Country (an organization linking upcoming country artists with the NRA brand and lifestyle) shrunk from 39 names to 37 – the slots for Florida Georgia Line and Rhett Miller had suddenly vanished.

Of course, more opposition has come from musicians outside of the country bubble. Artists like Lady Gaga, John Mayer, The Chainsmokers, and Vic Mensa have all spoken out on social media, demanding gun control. Ariana Grande, who has seen her fair share of concert-targeted violence, tweeted, “My heart is breaking for Las Vegas. We need love, unity, peace, gun control & for people to look at this & call this what it is = terrorism.”

Moby posted a meme on his Instagram reading, “MAKE IT STOP” above an assault rifle graphic. Below it, the artist wrote, “How many more mass shootings will it take? How many more lives ended? How many more families destroyed? We need sane, rational, sensible #guncontrolnow. The @nationalrifleassociation and every Republican who opposes gun control has so much blood on their hands. Mass shootings are evil, passing legislation that enables them to happen even more so.”

One can only hope that players in the country music scene – the scene most affiliated with the NRA and gun ownership – will eventually put aside the political demographics of their fan base and speak out. Perhaps country artist Will Hoge put it best when he spoke to Marissa Moss for Politico Magazine:

“Will this be the thing where all of a sudden every conservative artist comes out and supports gun control? That’s an unrealistic idea,” he said. “I do think this is the point where country artists are going to have to take long hard looks in the mirror and ask, ‘What’s more important to me: maintaining success at commercial radio, or doing what’s right?’”

I hope there are plenty of mirrors in Nashville.