ONLY NOISE explores music fandom with poignant personal essays that examine the ways we’re shaped by our chosen soundtrack. This week, Katie Wojciechowski relives the SXSW she spent sneaking around to see James Blake in 2011, before she – and her hometown of Austin – underwent some major changes.

I was only 19 in March of 2011, but I was already a seasoned South by Southwest attendee. I grew up in Austin, and even after leaving for college, the festival kept me in its orbit several years in a row. In the days leading up to SXSW, I scoured Twitter for updates on all-ages venues my target artists were playing – not as tough a search as it might sound, since SXSW transpires in restaurants as well as bars, on makeshift hotel lobby stages and in the corners of record stores – even, a few times, in Mellow Johnny’s Bike Shop. For me, SXSW meant a glimpse into the action of the music world I so desperately wanted to be a part of – and it meant a moment to breathe freely outside the stale air of my private school environment. Each carefully-researched buzz artist I saw (or snuck in to see) was a prize I wore like a medal on my camera’s memory card. And this year, the prize on everyone’s radar was James Blake.

Gracing the coveted Fader Fort bill, named “the breakout star for dubstep and a new standard bearer for electronic music itself” by NPR Music, and hyped by all the music blogs and sites I scrupulously followed at the time: Blake was my must-see. He was the indie darling of the festival that year, playing just a few secretive shows, many of them badge-only-and certainly 21+. The only all-ages James Blake show would be happening at the French Legation Museum, whatever the ever-loving fuck that was (I would never have said ever-loving fuck at the time). I’d already snuck into several other exclusive, albeit all-ages, events that year (for instance, a media brunch with the now-defunct Civil Wars that I just walked into with a big camera; no one said a word). Nabbing a few low-level shows of bands only I cared about was one thing, but I would feel defeated and left out if I didn’t catch James Blake while I was in Austin. This media favorite would be my prize kill.

I was a moderate James Blake fan and, more importantly, a devotee of the blogosphere. I kept a manically close pulse on what I perceived to be the cutting edge of musical trend. Blake’s esoteric first album piqued my curiosity with its more melodic singles, like “The Wilhelm Scream.” His music helped me study, accompanied me next to dewy coffee shop window condensation at the college town’s late-night cafe. I was blogging about music then, passionately and often, painting the world in grossly broad strokes. But there was something about the way it made me come alive that I look back on with fondness.

In truth, I liked James Blake’s self-titled debut, but I wouldn’t really fall in love with his music until I heard his acoustic piano-only cover of Joni Mitchell’s “A Case Of You” in 2013. It’s a song that would accompany me through the rocky start of a first and only love, and would lead me to its original – which I didn’t like at first, because Blake’s cover is so god damn good – as well as its composer, one of my life’s guiding lights. But for a while, there was just James, constant as a northern star.

I’d assumed that a mid-day show would have a meager turnout, but when I arrived, panting and sweaty, at the French Legation Museum, the line stretched around the block. As it turned out, many others were after a glimpse of the boy wonder. I felt the rush of a challenge, of rebellion, rise within me. Rock ’n’ roll would not accept defeat, and if there’s anything I’d learned over the last few years attending the festival, it was that a determined, wily teenage music nerd could circumvent pretty much anything but a bouncer.

I took a turn about the corner. The stone wall around the park, a block in area, was about five feet high. Giving myself no room for hesitation, I clambered over, taking care that my Nikon D5000 didn’t get bashed against the limestone. The rush of terror that someone would spot me was soon supplanted by relief: miraculously, no one witnessed my tumble onto the French Legation’s lawn.

Little miracles like this one were the bread and butter of my SXSW adventures. In a religious private school world defined by boundaries, I thrived on the once-a-year chance to prowl downtown, alone and unbridled, hopping fences and performing little crimes of sneakiness. The rush of these victimless crimes sustained me, the staunchly sober youth group teen who would never dream of drinking underage, let alone dabble in sex or drugs. With the big sins off the table, rock ’n’ roll was all I had.

In later years, I’d try a wall-hop with my now-husband. It wouldn’t go so well. Actually, we were interrupted mid-hop by a fussy attendant asking if we were there for J. Lo’s party. Obviously, we said yes. And obviously, our names weren’t on the list. We were shuffled out. It was my first real taste of an Austin I now know well, where East Sixth is a turf war for startups and A-listers get first dibs on any South-by showcases worth seeing.

On this day, though, the ebullient currents of fortune sustained me. My luck continued as I edged my way past people I really shouldn’t have gotten in front of, until I was standing at the very border of stage right, waiting for James Blake, my camera poised. He arrived suddenly, dripping sweat and schoolboyish good looks. He was tall. The photos I took of him as he navigated the sparse landscapes of his keyboard came out really well; I think I could have been a pretty good photographer, though never a great one, if I had cared enough to keep it up. Something like Tibetan flags fluttered in a colorful frame around the stage, and due to my unusual positioning at the very corner, I was looking out of the frame, not into it. 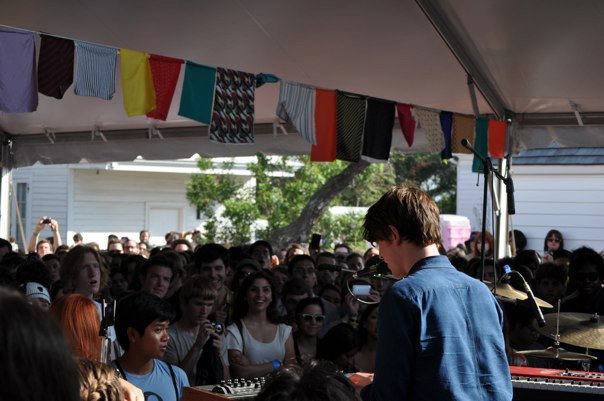 Blake’s solemn face stared down at his keys for most of the show, belying the throbbing emotion at the core of the set. His more abstruse songs came first: “Unluck,” “Lindisfarne I & II,” massive basslines welling up and buoying the event tent’s energy until the whole space seemed to pulse. The crowd was silent, hypnotized. By the time the set crescendoed into his singles, most notably the Feist cover “Limit To Your Love,” the collective swooning of the audience was palpable. At the end, they erupted into a raucous sea, ravenous for more. Blake politely declined.

After the show (short, like most SXSW showcases), I nervously waylaid him for a photo, my third and final stroke of luck for the day. With a mumble, he politely obliged. He looks so sweaty in the photo, so confident, like a real rock star. After that show, I knew he’d really be one, and in 2019, with his most recent release Assume Form, he sort of is. 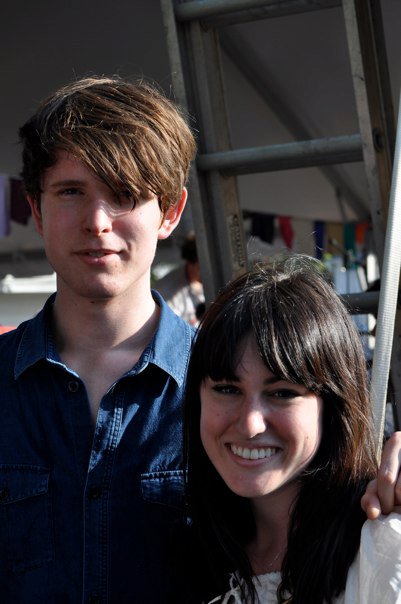 Not all my teenage predictions came to fruition, though. It’s strange to think that it’s been years since the twilight of “Keep Austin Weird.” A decade ago, in 2009, downtown buzzed with life as I reclined on a grass bank with a couple of friends; we reveled in the sunshine after a rainy, chilly two weeks in Europe with our classmates (for me, a miserable test of my social skills). Now, free in shorts and short sleeves, our gratitude to the city that raised us swept over us like a warm breeze. This was home. Later that day I’d venture out to Red River Street, half-assedly attempt to sneak in a few music venues, and relish the freedom of wandering the streets alone. Forever in this city would be a long time, I reassured myself. Long enough to get into a few venues by and by. The warm asphalt beneath my toes, as I toted my shoes down South Congress, assured me of that.

Today, I happily live in Portland. I haven’t lived in Austin for nine years. I would like to again someday, but there’s grief in the knowledge that it won’t really be the city I grew up in. I most recently went to South by Southwest in 2015, but by then I already knew it was over. Austin was J. Lo’s playground now, not mine.

My heart falls when newer Austin citizens quote staple eateries I’ve never heard of, or when I see haughty New Yorkers tout their badges via Instagram during their sponsored spring break jaunt. We shout about the places we’re from because we’re afraid of the conversation outpacing us. Austin is in my blood like holy wine, so bitter and so sweet.

James Blake just won a Grammy – somewhat ironically, for Best Rap Performance. But SXSW was always about catching somebody on the cusp, before all of that. And now, I realize, it was about myself, before most things, on the brink of life. Before bills, before legal drinking age, before marriage, before home for the holidays, before New Austin, there was just me, jumping over a wall, taking photos at a show.