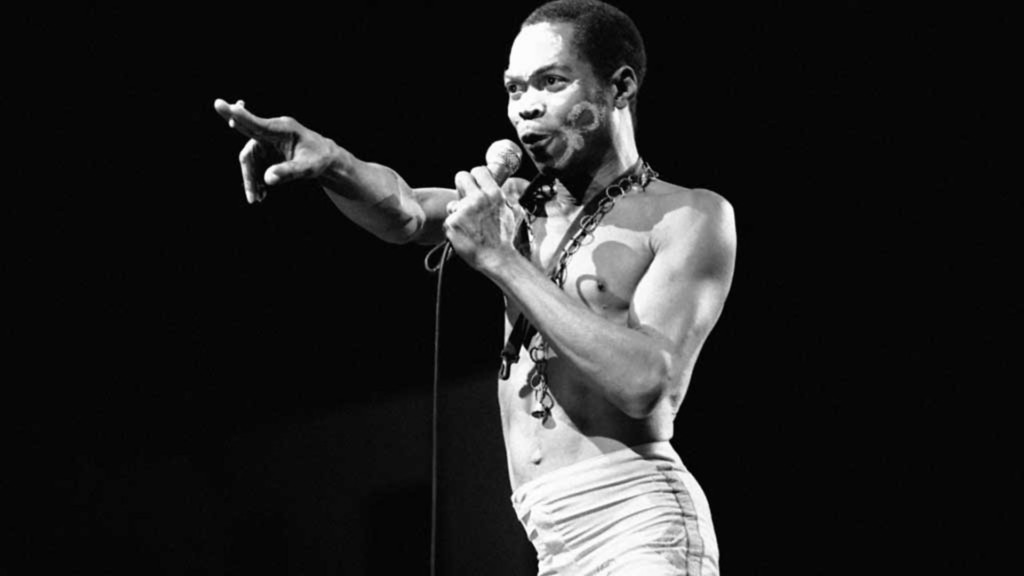 I take the same path to the same coffee shop every week. Down DeKalb Avenue, a right on Franklin Avenue, a left on Greene Avenue, and a final right on Bedford Avenue. My gait is calculated and mechanical. A determined trudge. There is nothing romantic about this habit, and while I’d like to applaud its efficiency, I haven’t actually done the math to prove that this course is the fastest. In truth, I take this route because it is the one I first took to the coffee shop. It is repeated out of reflex and muscle memory and stubbornness. It is firmly rooted in a strong longing for routine.

This path is so engrained that my body dictates every step while my mind is free to think – something I do best while in forward motion. Walking puts me in a trance – alert enough to dodge oncoming vehicles, but rapt in layers of thought. So rapt, that I nearly missed the fat Fela Kuti box set propped up against a wrought iron gate on Greene Ave one Spring day. I stopped abruptly three feet past where the box of vinyl rested, then ambled slowly backward looking left to right to see if anyone was watching me. This I am sure, did not look suspicious at all.

The box was over an inch in depth. It was black and white with a banner of teal across the front reading “FELA” in block letters. I couldn’t help but crouch down and open it immediately, praying that its owner wouldn’t come bolting down the stoop of his brownstone to reclaim it. Perhaps an angry lover had left it on the sidewalk along with other prized vinyl from his collection…like, that Fat Boys LP right next to it…and, that…Kajagoogoo maxi single…

Ok, these records were probably left out on purpose, but I still couldn’t believe it. Lifting the box’s slightly scratched lid I found an alarming amount of Fela Kuti records. I was expecting three, maybe four LPs, perhaps with some booklet taking up a majority of the box’s real estate. Instead I found a seven record pileup, each one opened yet minimally played and well cared for.

There was Zombie, Fela Ransome-Kuti and The Africa ’70 With Ginger Baker Live, Roforofo Fight, He Miss Road, Alagbon Close, Ikoyi Blindness, and Everything Scatter – a glorious heap of his recordings. I was in shock; seven intact, fabulous albums, the collective price of which would have been well over $100. It felt as though I’d stumbled upon a treasure trove, but I couldn’t understand why anyone would ever abandon it.

I grew paranoid again, remembering a time when my dad and I found a handsome sack of toys in the woods behind our house. At seven I was overjoyed at this discovery, but also puerile and hesitant, imagining the sad kid who’d lost their bag of wonders. My dad assured me that finders were keepers, and it was on our property anyway. To ease my concern he assured me that if the toys’ proprietor came looking for them, we could hand them over.

And that’s just what happened. The neighbor girl was ecstatic when reunited with her pink satchel of toys. I felt devastated but virtuous by returning it. To this day I cannot remember what was actually in the sack – just the absolute thrill of stumbling upon it in our mossy forest.

By the time I was halfway down the block my paranoia had dissipated, but I still clutched the Fela Kuti box tightly to my chest just in case. My sense of elation was difficult to unpack – I am by no means a believer of fate or the “universe” gifting me anything…but I surrender to the sensation of it from time to time. I have come across some of my favorite things this way – finding them while looking for nothing.

I first discovered Will Oldham because a neighbor left a stack of CDs in the hallway of my apartment building a few years back. It was in one of many fruitful “free piles,” a name my roommate and I thought we’d coined. The album was an oddball EP recorded with Rian Murphy called All Most Heaven. It had one of the worst album covers I’d ever seen, but something about it shouted “What the hell? Take me home!” It was eccentric, no doubt, but I loved it nonetheless. Its four twangy songs eventually graced a small road trip to upstate New York one summer (our car only had CD capabilities). Opening its jewel case now, the silver disk is nowhere to be found. It may still be in that car, but my only hope is that it has found a way into the music collection of anyone who would bother adopting a stray CD in 2017.

In our age of Spotify Discover Weekly and record subscription services and pre-programmed radios and playlists tailored to every hyper-specific situation we can dream up, coming to music organically and spontaneously is uncommon. It seems rare enough to exchange music between two people in the same room, let alone find one of your favorite records in the street. I wouldn’t suggest the scavenger lifestyle as anyone’s sole source of musical discovery, but I will say there is a taste of destiny in it. I don’t believe in destiny either, so anything that conjures a sense of it feels pretty damn nice, if not fleeting.

The other week I had finished my book and was looking for a new one to read. I had just spoken to a friend about how I’d oddly never read Hunter S. Thompson, which is strange as he fits the profile of my favorite writers (depressed, debauched, wry). Days later I walked through my basement, past a stack of books an old roommate had left three years ago when he moved out. I was drawn to a turquoise spine peeping out from under a couple of Bret Easton Ellis tomes. It was The Rum Diary, Thompson’s first novel. I am enjoying it tremendously, and can’t believe it has been waiting silently under my nose for three whole years.

Come to think of it, it was that same roommate who provided me with another bout of serendipitous discovery. When he moved, I upgraded to his bedroom after five years in the windowless cavern next door. His room had not one, but two windows, and he’d left his superior mattress and an enormous credenza that was far lovelier than anything I’d ever allow myself to buy.

I took my time moving in – I set up my haphazard bookshelf. I stuffed my 500 pairs of underwear into one of the credenza’s many drawers. I arranged my desk with reference books and a quantity of pens that would suggest I was deeply concerned about a imminent global pen shortage. After deciding that all of my portfolios from college would go in one of the credenza’s large cabinets, I opened the door and found around 80 forsaken vinyl records leaning against one another. I believe my mouth truly dropped open. This pile of albums ended up doubling the size of my collection, and included some true gems. There was Kate Bush’s Hounds Of Love, Roxy Music’s Manifesto, Prince’s Controversy, Talking Heads’ 77, Joni Mitchell’s Ladies Of The Canyon, Blondie’s Parallel Lines, Lou Reed’s Transformer, and dozens more. It seemed like luck, or at least something like it, and I took it as a good omen – something I also do not believe in.

I hauled the LPs I didn’t love (Donovan, Heart) to the nearest record store and swapped them for a $25 dollar credit, which I used to pad my collection with bizarre French funk punk records, Peel Sessions, and anything I could find by Prefab Sprout. Puzzled by my fortune, I still couldn’t understand why someone would desert a collection that had clearly been accumulated over a few years…but I was more than happy to give it a new home.