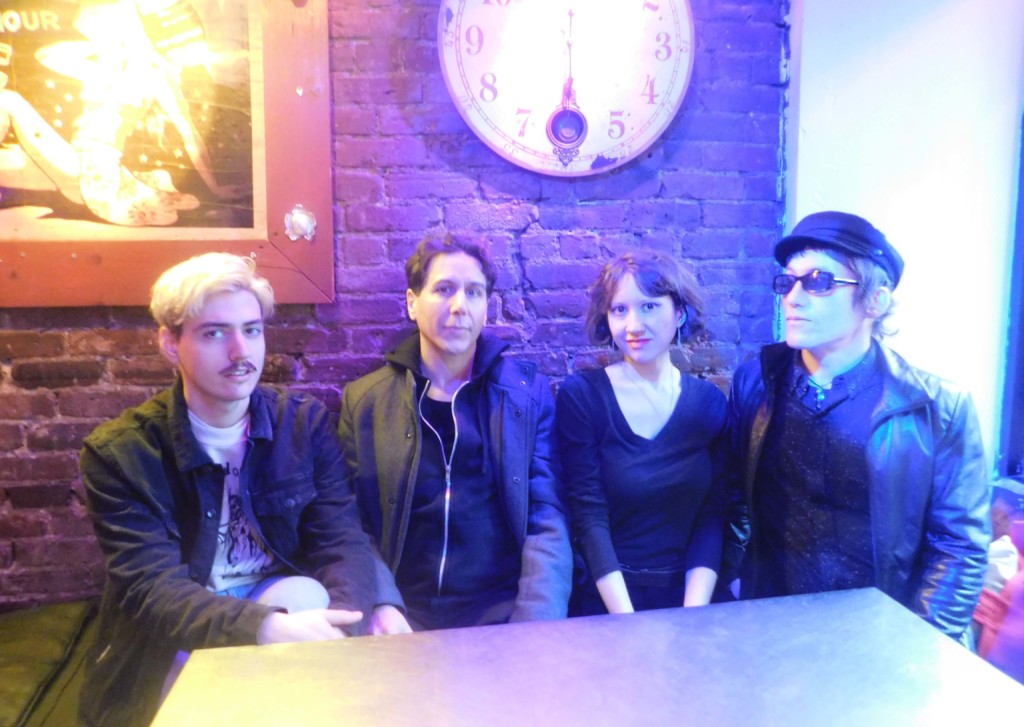 I internally scream about 20 times coming off the Q train, badgered left and right about handbags, handbags, handbags. Truthfully, last time I was in Chinatown I was below the legal drinking age. But Veda Rays vocalist James Stark made a very emphatic pitch for Bodhi Kosher Vegetarian Restaurant. So I’m here. I don’t want any handbags, but I’ll deal to dine with Veda Rays, and I’m down for any sake brunch that’s steeped in a sense of Eastern Mysticism.

If I’m not mistaken (I’m not) I have met drummer Jason Gates at Aviv. We’ve had bonafide conversations, his visage lives on one of my records, and he has a fun, eccentric energy that could power the Christmas lights on my street. As for Veda Rays as a whole, well, they’re the real deal, with a cerulean-soaked sound that could’ve been adjacent to the Batcave but has also been long cultivated in the Brooklyn scene. And their live performances pair it with captivating visuals; flickering television snow or twitchy orange monkeys set an ominous mood throughout.

Yup, these are the professionals, guys.

Hm. I feel good. In the past I usually show up with some sort melodramatic ennui. But I had my cards read Tuesday and things might be turning around.

Or they won’t, but let’s just get through brunch first.

The Scene: So yeah, this place. Recommended by a friend of synth player Maria Joanna Bohemia, the band have become obsessed with its kosher Thai offerings. Like they did a whole incidental vegan food tour of LA and this place is still top tier. And since they were long overdue for a visit and have been talking it up to bass player Renzo Vous (who still hadn’t been), it felt like the right move. They also love the Chinatown location, the appeal of old school New York; in his email James mentioned that their friend Ben Hozie of Bodega Bay said Veda Rays seemed “hatched out of the aughts NYC scene” (James only superficially agrees).

Sold. Although guitarist Gonzalo Tomé isn’t here today, Renzo and I are going to try out this food, and Jason arrives just as we’re about to get our sake. Let’s do this. 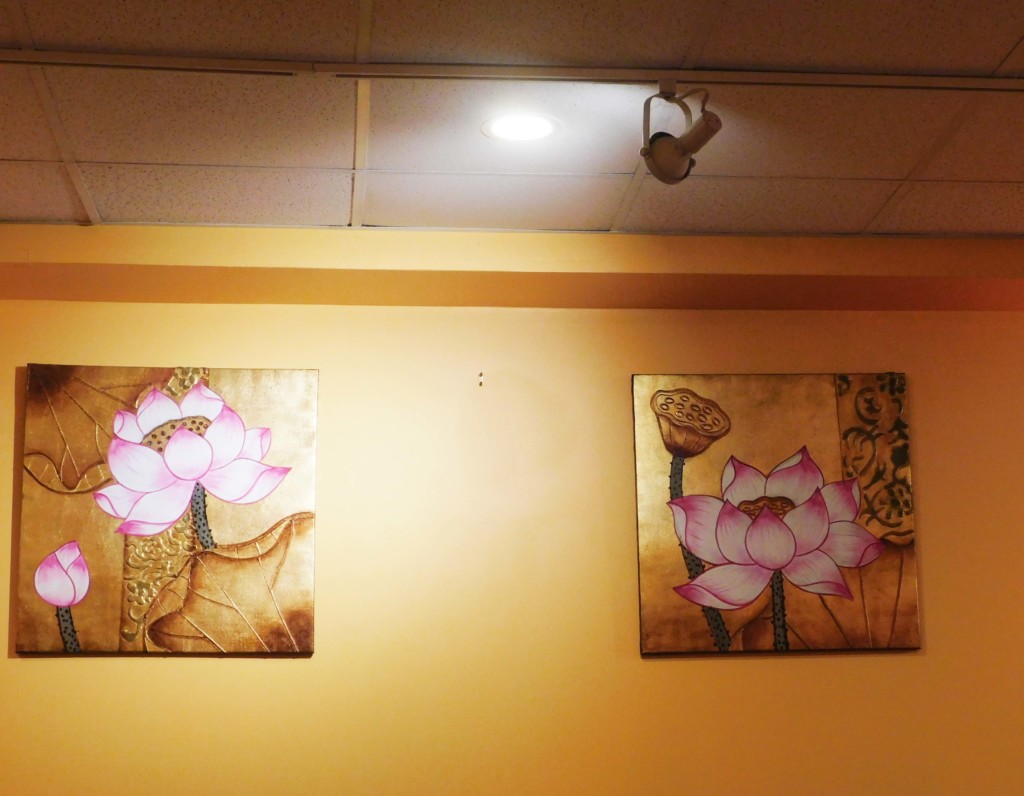 2:05 pm We’re talking about mutual friends (you already know where this is going, right?) and James says, “There was an old Veda Rays video where I killed Tarra.”

I respond as expected. “That’s the best!”

“Well, we pulled it down because it was…not being well received because of the violence-toward-women factor.”

Huh. “I get that, I get it being mis-perceived like that.”

“And when we made it it wasn’t such a Thing, but then there was a bit of rumbling, and as a couple of years went by we took it down,” James says. “But the premise had nothing to do with that – it could’ve easily been a man. It just happened to be a woman in the chair.”

So what was the premise, then? The band was riffing on maniacal, cultish figures to illustrate their song “Wait for Teeth to Show.”

“So the letter shein means tooth, right?” James starts. “There’s a tarot card that corresponds with that which is this fire card. The video would show flashes of the card, and the idea of a tooth in this context is like…in simplest terms it’s like, ‘The big fish eats the little ones,’ and you can’t understand the nature of reality in black and white, really. Things that seem horrible could actually be releasing energy so it can reform.”

“There’s a bigger purpose,” I fill in.

Anyway, Tarra’s very much alive and well – they saw her earlier this week reading tarot cards at Muchmore’s.

“She just gave me a reading recently and it was pretty positive,” I mention. At the end of Brooklyn Year One, I pulled the Ten of Swords from the deck, a mermaid stabbed several times over.

“So that’s you with the swords in your back. That’s the worst one!” Tarra said cheerfully.

“We were talking to our Lyft driver in LA who seemed to know Siouxsie and Budgie, and apparently she was quite the marketer,” James says. “She would put her insignia on like, everything.”

“The driver had a really weird resume – he lived with Angie Bowie for a few years. But his biggest stint as a bass player was like…” James turns to Maria. “Do you remember?”

She does not. “It was like, Anita Baker, Rick Springfield…” she lists, though the memory seems fuzzy.

“WAS HE HANGING OUT WITH BUDGIE A LOT???!!!” Jason interjects again, to which it needs to be clarified that you know, that was just a name in passing.

“He just thought we were just like these rock and roll people and that we were in love – we weren’t offering him any information,” James explains, and I can’t argue with Lyft guy’s evaluation because the pair are wearing sunglasses and machete earrings, respectively. “And he was saying we’re like Siouxsie and Budgie.”

“She would wear her own shirts. Some people frown upon that. I always kind of liked it,” Jason says.

“Where do we all stand on that?” I ask in a sad attempt to be a journalist.

James answers first. “I like it, and I do think about it a lot.”

Renzo’s a bit more upfront. “I’m on the fence with that one.” 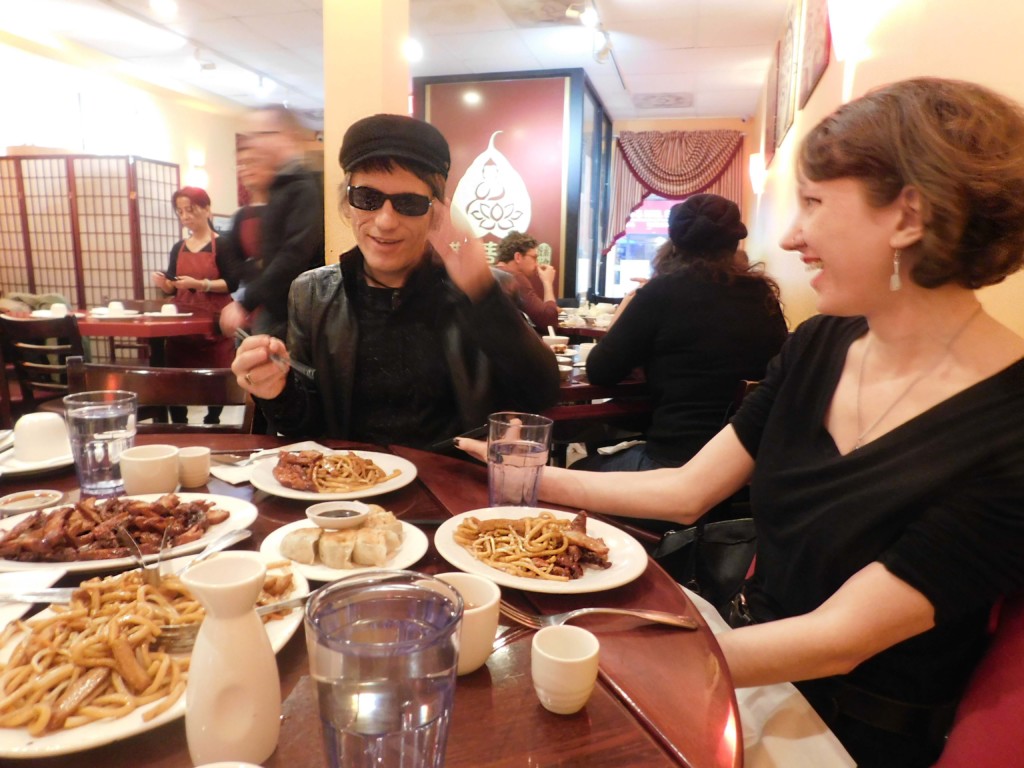 2:32 This is approximately when our food gets here and I just want want to assert that it was totally delicious. Moving on.

2:50 The band questions me about my day job which is basically to reenact episodes of Riverdale on Snapchat (among other things). Then I ask if they have any day jobs.

“I work at a pizzeria,” Renzo offers.

“That’s cool, I love pizzerias more than anything,” I respond. Facts.

“I work at Sizzle Pie. It’s like a punk, heavy metal pizzeria.”

“Yeah, King Krule came in,” Renzo says. “Actually I met Dylan Sprouse there the other day.”

“He actually left the pizzeria after his slice because we didn’t have beer,” says Renzo. “He was great. Different path from his brother for sure.”

In Brooklyn Year Two I pulled the Knight of Pentacles, a stabilizing, some would say “boring” card. And I preciously projected that onto all the wrong people. The cards are never wrong, but sometimes I am.

3:30 We’re splitting up leftovers when Jason asks what band I’m into, and I say something to the effect of, “Def. Grls made me fucking french toast, so them.” But no, he says beyond the scene. “Oh, just in general, my favorite band is Hole.”

“OH really?” I ask. “Yeah, Courtney Love is my favorite ever and I’ve loved her since I was like 13.”

“Yeah, I saw her a few years ago with Lana Del Rey.”

There’s a lot of excited bubbling at the table because this obviously sounds like a perfect tour marriage and I only saw Courtney with fake Hole in 2010. Tl;dr Maria and I were both her for Halloween at different points in our lives.

“I was her when I was 16,” Maria says. She checks her phone to find a picture.

“I’ve never dressed up as her,” Renzo deadpans.

“I had three costume changes,” I explain. “I cried. I threw a wine bottle down the street. I was very in character.” (But blah blah blah you guys already know this). Anyway, Maria quickly finds the picture and passes it around the table. 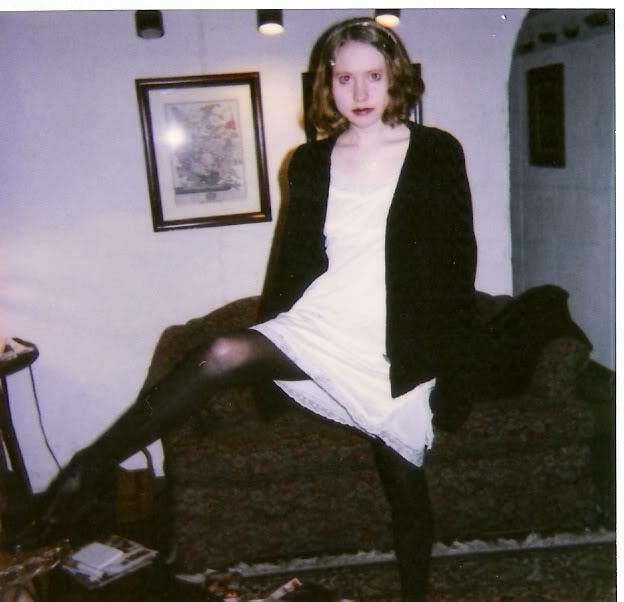 “It doesn’t quite work because I didn’t have my hair,” she says.

“But I get it, because you have the pose spot on, and the slip is really good,” I add.

Incidentally, I didn’t do the Courtney Love costume for 13 years because Tarra did it first, and I wanted to have respect for her costumes.

“You should start a web series with her,” Jason says. “Tea and Tarot with Tarra.” 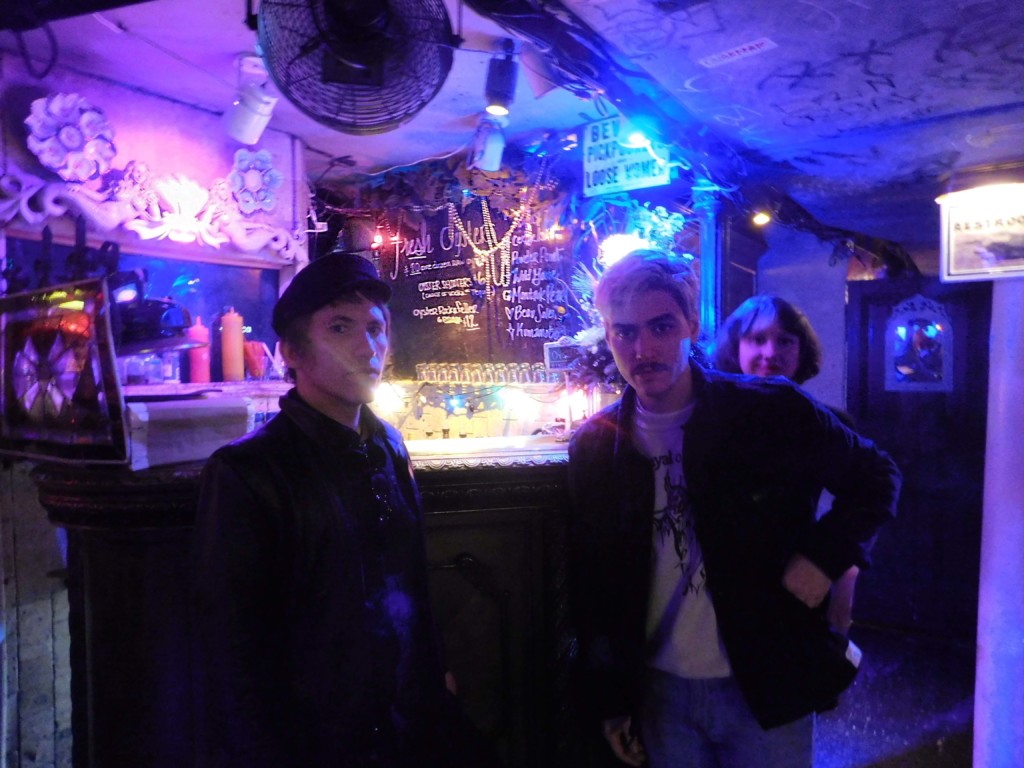 4:43 “None of that blue light is translating right now, right?” James asks.

I look into the viewfinder. “No, it’s purple at best.” We’re at 169 Bar, one of the last dives in the LES, lounge-y and bathed in cool tones. After another drink, we take pictures while Jason lets loose on his feelings about Beyoncé (off the record, not sending the Beyhive out for him). But the band’s liking how my coat matches with the pool table, so they force a group of people away to take glamour shots. 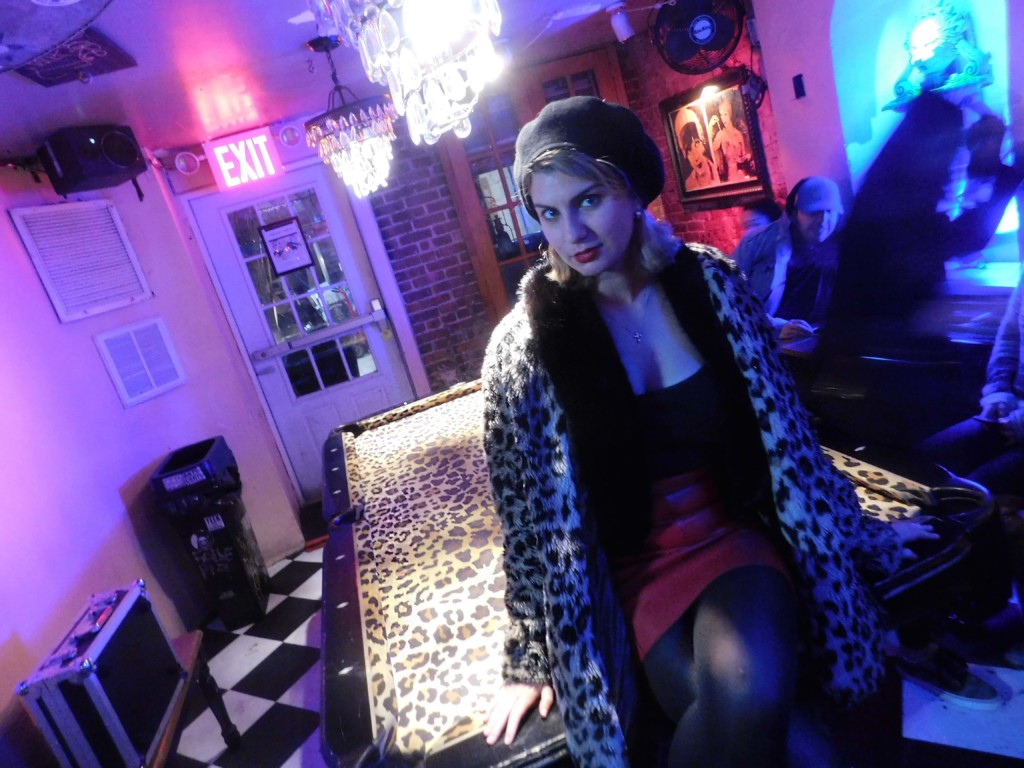 Even though we can’t get the perfect shot I can’t deny that Veda Rays live their life (and create their art) strictly in cool tones. But they also have a rawness that feels very old school New York, the scene that I dream of but was Before My Time.

I get off the L, fighting the light ennui coming on. Ugh, stop! The future looks good! I have the Queen of Swords in my future and a container of noodles in my handbag.