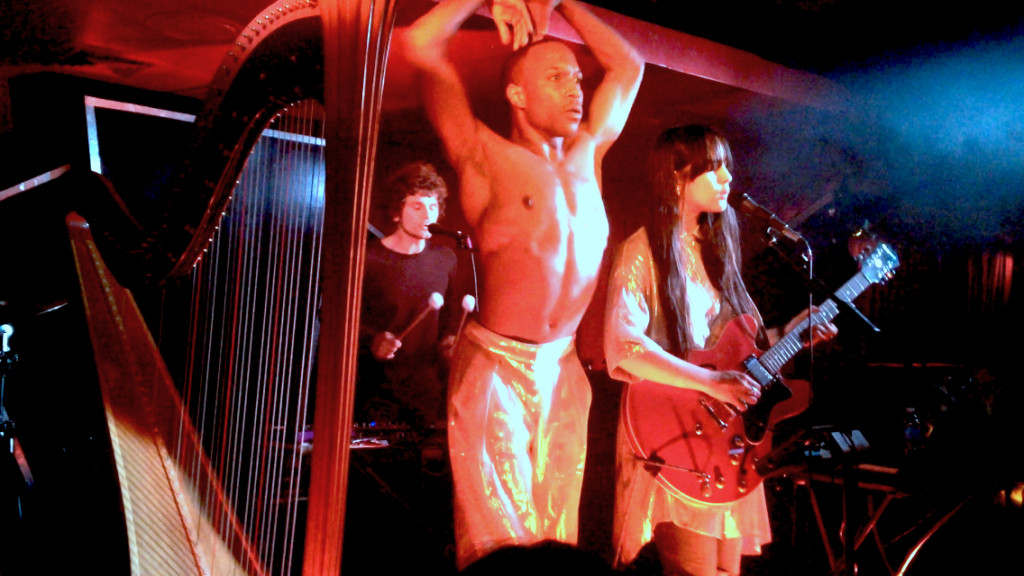 The making of Young Magic’s 2012 debut Melt was as international an affair as the band itself; Isaac Emmanuel was born in Australia, Melati Malay in Indonesia, and though the two met and started making music in Brooklyn, they’ve rarely been home for a breather since. May 6th marked the release of their sophomore record, Breathing Statues, on Carpark Records, and much like the album that came before, it was written and recorded all over the world – Morocco, France, the Czech Republic, Australia and Iceland to be specific. During a recent stop in NYC, Young Magic played an album release party at Manderley Bar in The McKittrick Hotel, the iconic location of long-running immersive Macbeth re-imagining Sleep No More. The setting was a fittingly opulent and evocative space in which to showcase Young Magic’s latest material, which is a good deal darker and far more sensual than their earlier work. The move has served them well, taking the shoegaze-infused dream-pop that characterized Melt and adorning it with a tribal flourish.

Young Magic’s core duo were joined onstage for a few numbers by a harp player, though she was admittedly difficult to hear in the mix, and also by their touring drummer, who punched up Emmanuel’s drum machine and synth rhythms. Malay manipulated her own vocals from a black box attached to her mic stand and let her voice dissolve in and out of the music. Clad as she was in a nearly-sheer, pearlescent tunic, she seemed both mystical and spectral, her stoic vocal delivery cementing this impression.

The release party was populated mostly with masked attendees spilling over from the evening’s final Sleep performance, so it’s unclear what they might have been expecting after disoriented explorations through the three-story warehouse. But aspects from Sleep spilled over, like remnants in a dream – a male dancer performed some breathtaking interpretive maneuvers to a few of the most provocative tracks, beginning with “Something in the Water.” Like most of Sleep No More‘s cast, he was incredibly lean, wearing only trousers made from the same cloth Malay dressed in, each muscular striation visible under the skin, his ribs on display for the counting, in every sense a living, breathing statue. For “Cobra,” his movements seemed to channel a Trans identity, figuratively acting out motions that felt like references to gender reassignment and other transformative processes. Though there was no costume change, as the number went on the subtle cues and movements seemed to grow more feminine, his gaze challenging the audience right along with Malay’s breathy words: I’ll ask you to believe it. His thoughtful performance elevated Young Magic’s songs, highlighting all of the intricacies and possible interpretations that the band have built into the new record. It’s a record that shows growth in the more atmospheric and intimate approaches it takes.

The album is available now digitally as well as from Carpark.