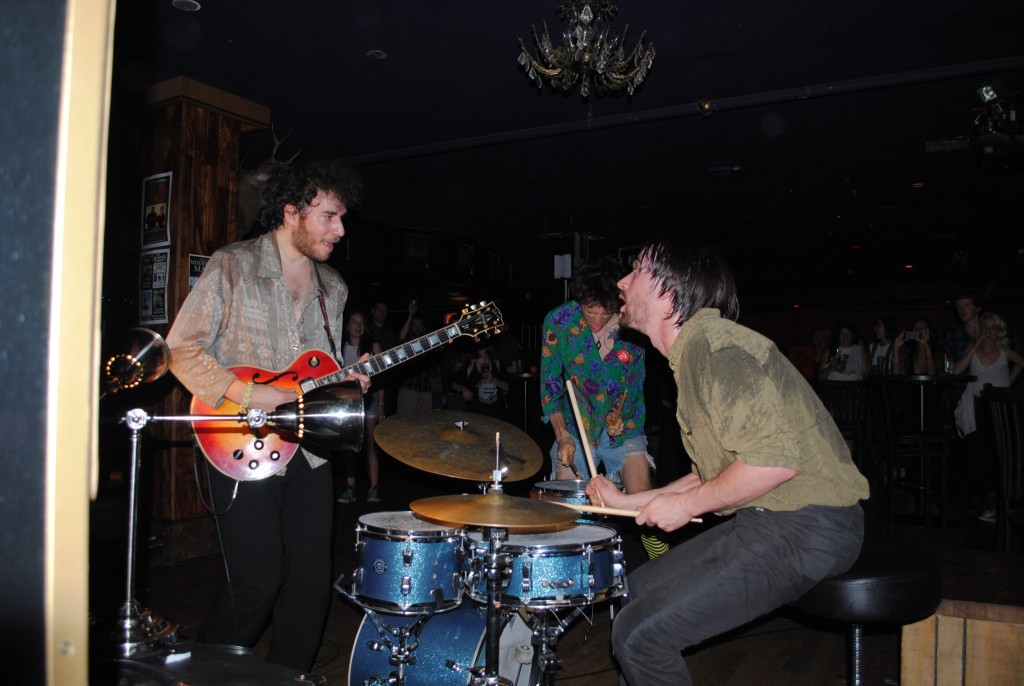 For all of the venues we’ve lost in the past couple of years: Death By Audio, Glasslands and 285 Kent to name just a few, I sometimes find myself creeping back into Manhattan in search of a cozy room. The Mercury Lounge is one of those spots that, despite its address in the oft-maligned Lower East Side, has yet to fail me as a concert hall. Where else can you see acts as disparate as Nathaniel Rateliff and Ty Segall? Where else is there an intimately sized space with a soundman who actually knows what the hell he’s doing? Where else would Yonatan Gat be able to order half the crowd to mount the stage while the rest of us encircle him and his band on the floor?

I went into Friday night not quite knowing what to expect, an outlook I’ve always believed yields the best results. I had never seen Monotonix in their heyday, but of course was well aware of the legacy…and the riotous, hedonistic, often-flammable sets they played. Would the night end in sirens? Fisticuffs? Human sacrifice? None such luck for the sadists, but I can say us music lovers were well pleased as Yonatan Gat and Co. delivered the best live performance I’ve seen this year.

Warming the crowd for Gat was local band PC Worship, who I’ve been hearing good things about for a while now. Their set was somber and hard-hitting, with more complexity than you see from most openers. Right off the bat I catch sight of drummer Shannon Sigley, who I can’t help but liken to a young Sandy West. Aside from being ace behind the kit, Sigley is no doubt the charismatic core of the band-with a kind of sex appeal that isn’t tawdry, just plain badass. What can I say? I love a lady drummer!

Vocalist Justin Frye manages to be the technical bandleader while giving his fellow musicians enough breathing room, which makes all the more sense when you learn that many PC Worship members were once New School jazz majors. The length and the freedom of their songs speak to that fact-at one point I split for the restroom mid-track, only to return to the same song, still droning.

PC Worship is a difficult band to genre-baste. Their music is far too texturally interesting to sum-up in one word. There’s punk, jazz, shoegaze, grunge, kraut rock, space rock, jam band…space jam? Whatever you want to call them, you have to hand it to a band who’s bassist doubles as a squealing sax man, and who’s rhythm guitarist can opt for the conga while sat on a cinderblock.

I wasn’t entirely paying attention to the set up between PC Worship and Yonatan Gat, and I have my companion to thank for noticing in time that Gat’s gear was being assembled on the ground. Audience members formed a circle around the instruments and a sharp green light beamed from its nucleus. By the time Yonatan Gat, drummer Gal Lazer, and bassist Sergio Sayeg took to the…floor, there was a tangible buzz in the air.

Something I think of far too little as a music journalist is the crowd – and what an integral part of a show they are! The séance-like encircling of Gat’s band provided a panoramic view of the fans and a chance to stare into the eyes of your peers while sharing the excitement of this one moment in time.

And what excitement! We got 45 minutes of near-unpunctuated noise. Yet another genre-swapping band, the trio volleyed between psych-rock, garage, punk, surf, jazz, and just general sonic mayhem. Both Gat and Sayeg were wizzes on their respective strings, but the drummers stole my heart that evening: Gal Lazer was off the chain.

An immensely skilled percussionist, Lazer looks like Iggy Pop and drums with the thrashing insanity of Keith Moon-a sort of precise madness that you don’t see too often. His style was sexy, staccato, punk-jazz genius. I couldn’t take my eyes off of him…or his unzipped fly, the latter of which may have distracted me from the fact that his brilliant playing was emanating from a toy drum kit. He played so fast that I originally thought he was working a double bass pedal, but I don’t think those have saturated the Fischer Price My-First-Drum-Kit market quite yet.

The colorful workman’s lamps set up by each band member suddenly flicked off, leaving us all in darkness for a moment. As cheers swelled the band remained fixed. Eventually the lights slapped on again to the sound of Gat saying “thank you, very clever.” As it turns out, encores are just as exciting when the band never leaves the room in the first place.