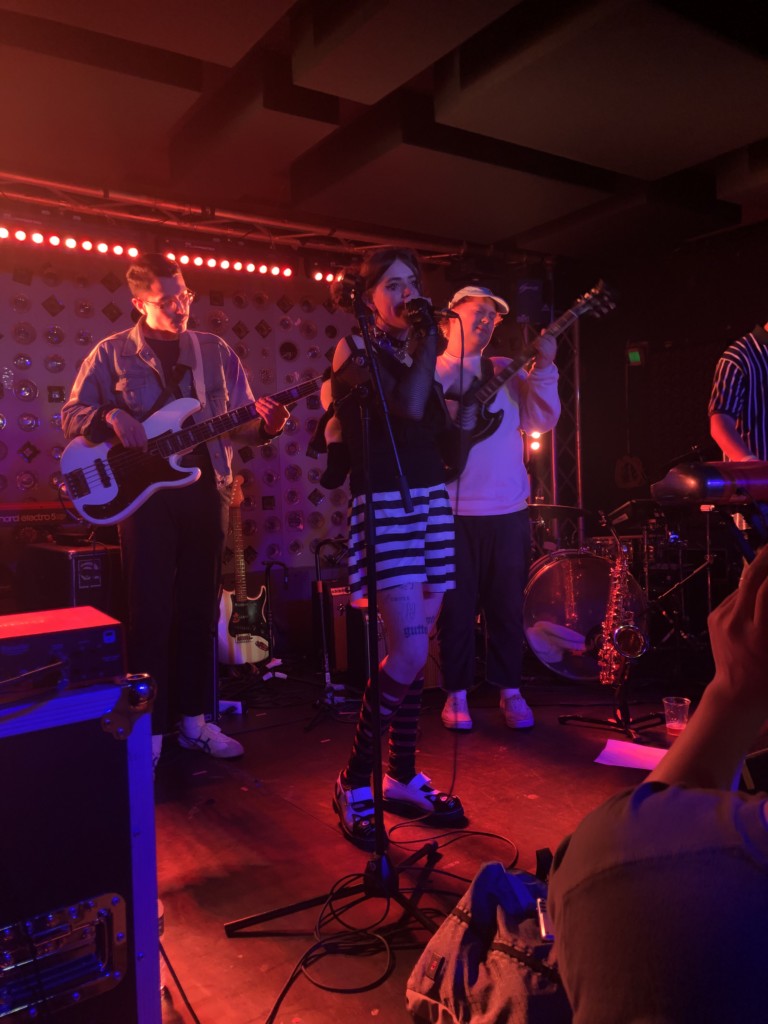 In the bar prior to the start of the show, I notice a girl behind me by her soft laugh that contrasted the sad clown makeup dripping down her eyes. Heavy BDSM-inspired leather jewelry, fishnet fingerless gloves, and torn-up knee-high socks weigh down her 5’3″ stature. Commanding attention in the most unassuming way, this girl – unmistakably Sophie Meiers – is playing what is only her second show in New York City tonight at Baby’s All Right. The next time I see her is on stage setting up for her performance, turning around to reveal a plush panda backpack. I joke to a friend that I hoped she’d keep the backpack on; she did, for the duration of the performance.

Having gained a following by posting songs to Soundcloud over the last two years, tracks like “Wet Socks” and “Don’t Be Scared” conducted the crowd into a uniform sway, floating on her flawless pitch. A standout of the set was a song of nearly painful selfless devotion, the Nion-produced “Broken Toys.” Embellished with imagery of Meiers as a “pretty package” adorned in “ribbons and colors,” her visceral, yet plaintive cry of “Did you see, the note on the inside?/It said ‘eat me alive'” shouldn’t sound as romantic as it felt in that moment. It’s thanks to her airy timbre resonating a blissful effervescence without sacrificing any strength.

Her covers of fellow R&B crooners Allen Stone and Corinne Bailey Rae were lovely breaks in the set. The bedroom synth re-imagining of Stone’s “Unaware,” a song about economic strife, felt optimistically warm. Meanwhile, her voice suited “Put Your Records On” so well that you’d almost believe the song was written to be heard in low fidelity. There was little banter between songs, just genuine “thank yous” and that same soft giggle that I’d heard inside the bar.

Her allure draws me closer to the stage (as does that of her standout sax player Jason, if we’re being honest) where I then notice the cat faces on her shoes; it’s an aesthetic best described as “Hot Topic baby,” or better yet, “gutter girl” flavor, a title she has branded across the top of her thighs. She looks perfectly in place before the sparkle of Baby’s All Right’s unmistakable backdrop. A fan in the front row had a bold, inky eyeliner design to rival Meiers’ own.

Closing song “Forget Me Not” offered a sudden increase in tempo and heavier bass that manifested the young crowd into the softest form a mosh pit could ever take. She floated off the stage as quietly as she came on, leaving me feeling haunted, wondering when I might next be graced with her presence.