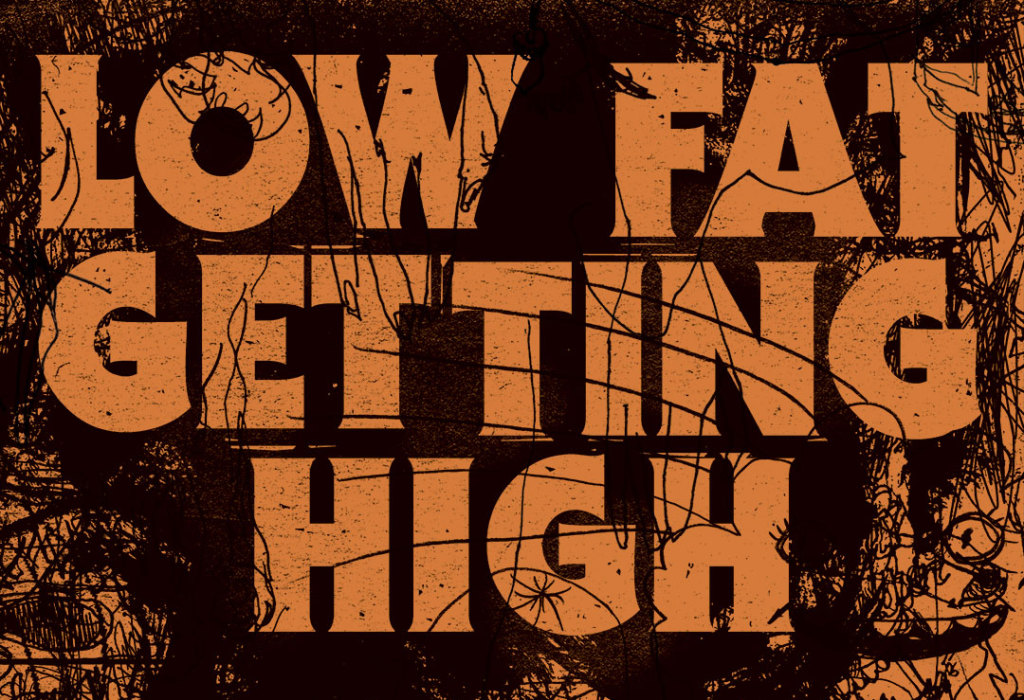 Grow your hair. Throw a beer. Break a bridge, chuck a cymbal. Hold your Jazzmaster with its busted bridge up to the foam ceiling insulation to get more feedback. Play through stacks jacked up so loud you drown the house PA. I don’t know if Brooklyn’s Low Fat Getting High read a book on how to be the most rock n’ roll, but they sure as hell could write one.

Low Fat has been making strides in the underground rock circuit as of late, receiving praise from the likes of Brooklyn Vegan and the Village Voice, the latter calling them NYC’s Best Rock Band. Now while that’s a hefty medal from a source past its prime, Low Fat certainly do kick ass. The proof was at the Cake Shop last Thursday, where the trio shared a record release party alongside label mates The Black Black. Both groups have fresh vinyl out on NY’s own Money Fire Records, Low Fat’s being a self-titled 12 song ear-ripper that could sit on a shelf next to 90’s Queens of the Stone Age; no shortage of muddy bass and aggro drums here.

The Money Fire boys split the bill with Dead Stars and recent Seattle transplants Iska Dhaaf who opened the evening. Iska Dhaaf, whose name roughly translates to “to let it go” in Somali, is made up of Ben Verdoes, formerly of Mt. St. Helens Vietnam Band and Nathan Quiroga of the much-maligned Seattle “rap” outfit Mad Rad. To let it go, indeed. To the credit of the band’s reincarnation, Iska Dhaaf put on an entertaining show that revealed their diversity and technical ability as musicians and songwriters.

Verdoes sang harmony, played drums with his right hand and diddled a miniature keyboard with his left. Meanwhile Quiroga sang lead and riffed on his battered 335, duck-walking and playing footsie with an 8-pedal effects shelf. If multi-tasking is a necessity of the era, these boys will survive just fine.

Next up was The Black Black, whose latest record Boogie Nights brings to mind bands like Minutemen and Mclusky. Lead singer/guitarist Jonathan Daily’s vocals could hardly be heard over the band’s pushy breed of post-noise rock, but his attitude rang loud and clear. A bastion of blasé, he sneered while mouthing sarcastic lyrics such as “what the world needs now is one more band.”

But while Daily had a self-deprecation dilemma on his hands, the rhythm section seemed to be having a blast. The bassist, who looks and sounds like he stepped out of the 1980’s New York hardcore scene served up tendon-trembling riffs with no hesitation. Smiling wildly behind the drum kit was Tomo Ikuta, whose grinning enthusiasm is something rarely seen in a rock band. An exceptionally skilled drummer, he filled out the band’s set with as many solos he could squeeze in.

Co-headliners Dead Stars steered the evening in a more melodic direction, though I found their sound to be less exciting than that of the previous groups. They’re a talented group of musicians, but exude a commoditized presentation of grunge and shoegaze, complete with ripped jeans, laissez faire hair and flannel button-ups. Jeff Moore’s vocals are a bit on the whiny side, and the music isn’t groundbreaking enough to spark much conversation.

Low Fat Getting High, on the other hand didn’t seem to be wearing anybody else’s outfit. They’re true entertainers, packing more into the first five minutes than most bands do in 45. By their second song a cymbal had flown off of the drum kit and lead singer/guitarist Michael Sincavage had broken the bridge of his guitar. No matter though, it only seemed to add to their air of “who cares?”

The band played a full-throttle set that was nothing if not entertaining (and of course badass). Artie Tan hammered out fast-paced sludgy bass lines, bouncing around the stage with a recklessness that defies his waifish build. Sincavage didn’t disappoint with face-melting solos, taking his performance into the crowd from time to time.

For all of Low Fat’s serious rock ‘n’ roll, they had an admirable sense of humor about themselves while they played, cracking jokes and smiling through their curtains of hair. It didn’t hurt that it was their record release party, and that the crowd was full of friends and Money Fire brethren. At the end of their set, the audience shouted for more songs, to which Sincavage quipped:

“We’re too young for encores.”

Can’t blame them for that.