Philadelphia native Kurt Vile (and his touring band, The Violators) drew in a large crowd for his Friday night show at Terminal 5. Vile plans to begin touring extensively across the US and Europe for the remainder of the year  in support of his most recent album, Wakin on a Pretty Daze, released earlier this year through Matador Records. The bill also included Lee Ranaldo and The Dust–consisting of Sonic Youth’s guitar virtuoso, Lee Ranaldo and drummer Steve Shelley–and Brooklyn indie band Beach Fossils.

Vile, who has been a musician since the age of 14, has cited lo-fi legends like Pavement and Tom Petty as some of his major influences. Wakin on a Pretty Daze (Vile’s 5th studio album) has received much acclamation and has been referred to as his most musically solid work to date.

Fellow Matador labelmates Lee Ranaldo and The Dust followed, bringing forth material from their most recent work, Between The Time and The Tides. Songs such as “Xtina as I Knew Her” and “Fire Island (phases)” exhibited Ranaldo’s desire to drift away from his signature experimental work in Sonic Youth, and instead hinted a number of 60’s rock influences, such as the Grateful Dead and the blues rock band, Hot Tuna.

The setlist for Kurt Vile and The Violators mostly included material from the Vile’s last three albums. The band started off with the 9 minute opener “Wakin on A Pretty Day,” Vile’s face buried underneath his infamous mangled, brown hair, muttering a quick ‘thank you’ before following with the drowsy tune “Jesus Fever”  from 2011’s Smoke Ring for My Halo. Vile then resumed performing material off of Wakin on a Pretty Daze, such as the droning indie-psych single “Never Run Away,” as well as the Petty-esque “KV Crimes” and the bouncier “Was All Talk”, the background instrumentals slightly reminiscent of 80’s pop. Vile took a moment to perform a couple of acoustic songs–including the fan favorite “Peeping Tomboy”– while sitting on a tie-dye blanket draped couch near the corner of the stage. The lights throughout the venue dimmed, save for the spotlight focused on him. Vile resumed alongside The Violators after a couple of technical difficulties (“We’re sorry, this is a very blue-collar production we have here” he mumbled jokingly), playing a couple songs (“Hunchback,” “Freak Train”)  off of Childish Prodigy, and was greeted with much enthusiasm.

Though some may argue that Wakin on a Pretty Daze greatly differs from Kurt Vile’s earlier material, there is no doubt that he and his now semi-permanent touring band have the potential to enrapture audiences through live performance.  Kurt Vile and The Violators offer a truly innovative type of psychedelic, lo-fi that will keep ardent listeners talking for years to come. 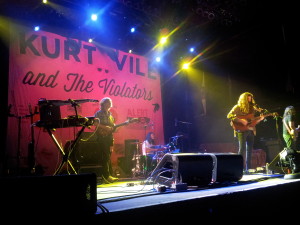