Skip to content
We caught up with one of Houston’s hardest working bands, The Tontons, who played a slew of shows at this year’s SXSW and will follow-up with a mini-tour of the Southwest, including some one-off festival dates in France and at Firefly.  They’re out in support of excellently eclectic new record Make Out King and Other Stories of Love, which they released in February (stream it at the bottom of this post).  The band’s charismatic front-woman, Asli Omar, sheds some light on the true stories that inspired the songs, and what it’s like to tour with a bunch of boys. 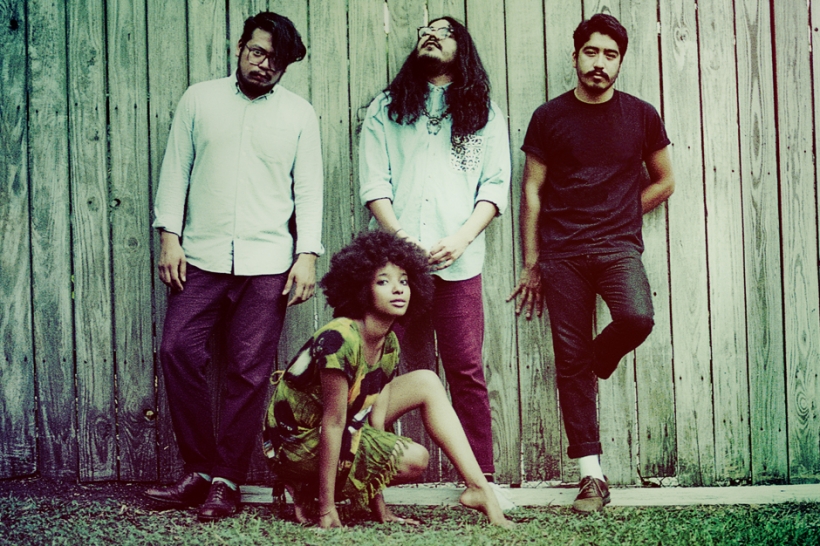 Audiofemme: Tell us about the music scene in Houston and how it’s influenced the band.

Asli Omar: The Houston music scene can be great because it’s so diverse. There was never a crazy indie scene until now though. Which could be good and bad. On the one hand, it forces you to think outside the box when it comes to the shows you put together. So you wind up playing really diverse shows. In one show, you can have a rap artist, a string quartet and a band like us. You’re drawing from all of these really amazing different styles of music and no one is telling what you should or shouldn’t sound like. It allows for a kind of creative freedom that I don’t think you’ll find in other major cities. On the other hand, there can be virtually no support system, so if you’re not outgoing and humble and willing to work four times as hard as most other bands, it’s easy to get left behind.

AF: How did the four of you meet?

AO: The story of how we met is pretty average. We were all in high school bands that kind of fell apart at the same time. We had known each other for a bit just by being in the scene. So we decided to form a new band around 2007, but didn’t really do anything with it till 2010 or so. Our drummer and the guitarist are brothers.

AF: Your latest record is called Make Out King and Other Stories of Love.  How does the title reflect the material on the album?

AO: Most of the inspirations for the songs on this album came from romantic experiences that I have had over the course of two years. As a band, we have been having kind of our first taste of success and that lends itself to a lot of interesting experiences with people. You’re kind of put into situations where you’re having these intense moments and so are the people around you and at the same time some of the people who have been in your life are trying to get acclimated to your new schedule. I think especially as a woman in her early twenties, a lot of the things you might expect from your life as far as relationships are concernered, platonic or otherwise, are completely impossible when you’re in a band. A lot of this album is about coming to terms with that fact.

AF: Was there any reason for the five-year break between your debut album and Make Out King?  What was beneficial about taking some time to write and record new stuff?

AO: We released and EP called Golden in October 2011 and a seven inch on vinyl called “Bones” in February 2013.  I think the main reason it took us so long to release another full length is that we we’re so busy. I actually lived in New York for two of the five years and for almost two of the years we were non-stop touring. It all kind of came down to a matter of timing.

AF:  Do you have any embarrassing make-out stories?

AO: The ‘Make Out King’ himself was an embarrassing make-out story. The title actually stems from an inside joke the band has about this guy I kissed once or twice. When you’re the only girl in a band full of guys, every make-out story can be twisted into something embarrassing. There are definitely a few that I wish I could take back.

AF: You’ve got a reputation as a great live band.  Do you have any tricks for connecting with your audience?

AO: Just love what you do. I think people respect honesty. If you’re honest with yourself, you can be honest with the audience. And being confident can help a whole lot too.

AF: What are your touring staples while on the road?

AO: Wet wipes, Topo Chico, and a lot of movies.