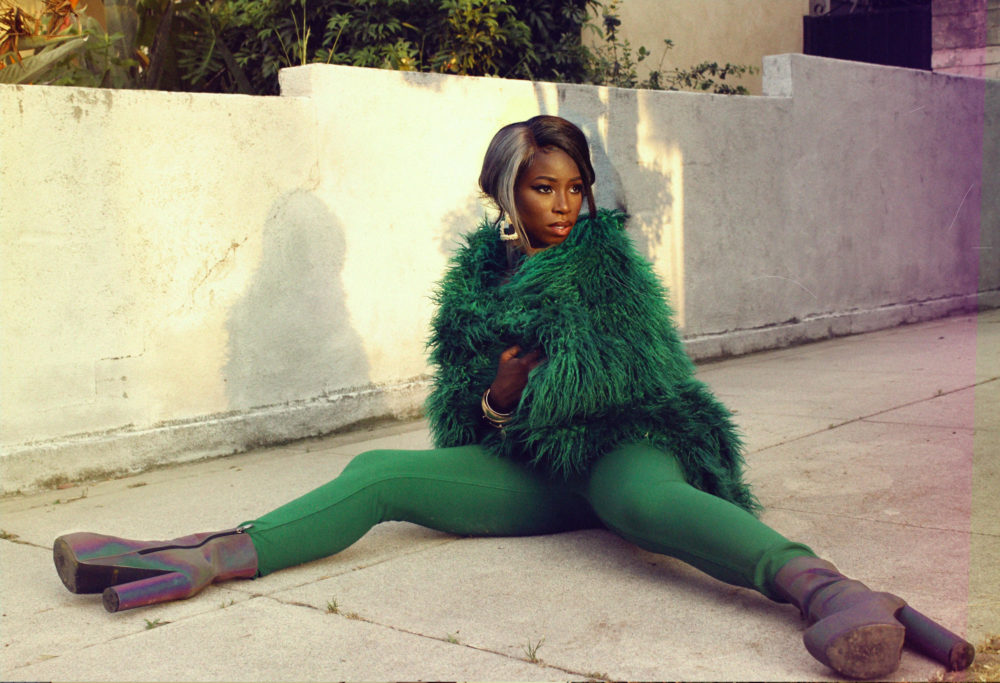 Haitian-American R&B artist TeaMarrr‘s latest EP Before I Spill Myself began as a humorous and candid exploration of sex and love – but somehow, the songs turned into something more than that. For instance, “Doin It Wrong” rips into a bad lover, but after releasing the music, she realized it was healing people in more ways than she anticipated. “At first, I felt guilty or ashamed that I was like ‘look at me, look at me,'” she says of promoting the release. “But people are actually using this to find themselves and escape and find a little break form the madness.” In the same spirit, “One Job” describes a man who gets “emotional” when she only signed up for “the dick;” on social media, activists began re-appropriating the lyrics in service of social justice, writing statements like “they only have one job: arrest the cops who killed Breonna Taylor,” and “they only have one job: protest,” says the singer.

When she recorded Before I Spill Myself, TeaMarrr was “trying to put a beginning, middle, and end to the feeling of meeting somebody and falling for them and realizing they weren’t it,” she says. “I wanted it to be through my heartbreak and betrayal. I just wanted to put something out that’s relatable and medicinal for people that are going through it in the same way that I was, when it comes to being unsure of yourself.”

With her brazen lyrics and crossover appeal, TeaMarrr is to the Haitian diaspora what Nicki Minaj is to Trinidad or Rihanna is to Barbados. TeaMarrr doesn’t typically write her songs before she gets to the studio — she finds a beat then freestyles over it until she finds something she likes, a style borne from her early days recording her voice over beats she found on YouTube. This method gives her lyrics a conversational tone that makes you feel like a friend is giving you advice. In “Done,” for instance, she speaks the words, “Just calm the fuck down/K, you don’t need this human/You don’t need any human/OK, I lied, but/Just understand that you are enough.” On opening track, “Chasing Amy,” she warns a new love interest about herself: “I kinda bite.” In “Whorey Heart,” she complains about a partner who can’t help but sleep around: “You don’t want walks in the park/You just want everyone sucking you off.”

The Boston-born, LA-based artist is intentionally open about sexuality, which she considers a form of empowerment. “A lot of my lyrics, even more emotional ones, stem from the empowerment I feel not from getting fucked but fucking someone,” she explains. That’s what she sings about in “Tick” ft. SiR: “I ain’t had it in a long time, but while we’re on time, let me fuck you/Love me from moon shine ’til your morning wood/Give it to me for the one time ’cause you dumb fine and I want you.”

TeaMarrr’s sexual candidness also shines in her latest video, for “Doin’ It Wrong.” In the James Bland-directed clip, she and a group of women dance in front of Insecure actor Jean Elie and other men, addressing lyrics to them like,”Please slow down/Too much tongue/Don’t fuck up the rhythm/Are you done?” The video was inspired by musical theater, with the women performing on a stage and venting about bad lovers in a backstage area while they’re doing their makeup.

TeaMarrr’s ties to Insecure don’t end there – she was the first artist signed to Issa Rae’s joint venture with Atlantic Records, Raedio, which encompasses publishing, live events, music supervision, and artist development. TeaMarrr says she saw herself in Rae’s Awkward Black Girl series, and making that connection felt manifested. Rae, for her part, told Billboard in February, “I want her to succeed. I am listening to everything and I am giving my opinion about everything.”

All in all, different listeners can take very different meanings from the EP, but TeaMarrr hopes that in some way, it helps them all to heal themselves and reflect on their lives. “We’re in quarantine, so what are we here to do besides look in the mirror?” she points out. “This is the perfect time for the music to come out because people are trying to reinvent themselves. We’re in a new dimension in 2020, music-wise, historic-wise, so I’m excited to see what comes about.”