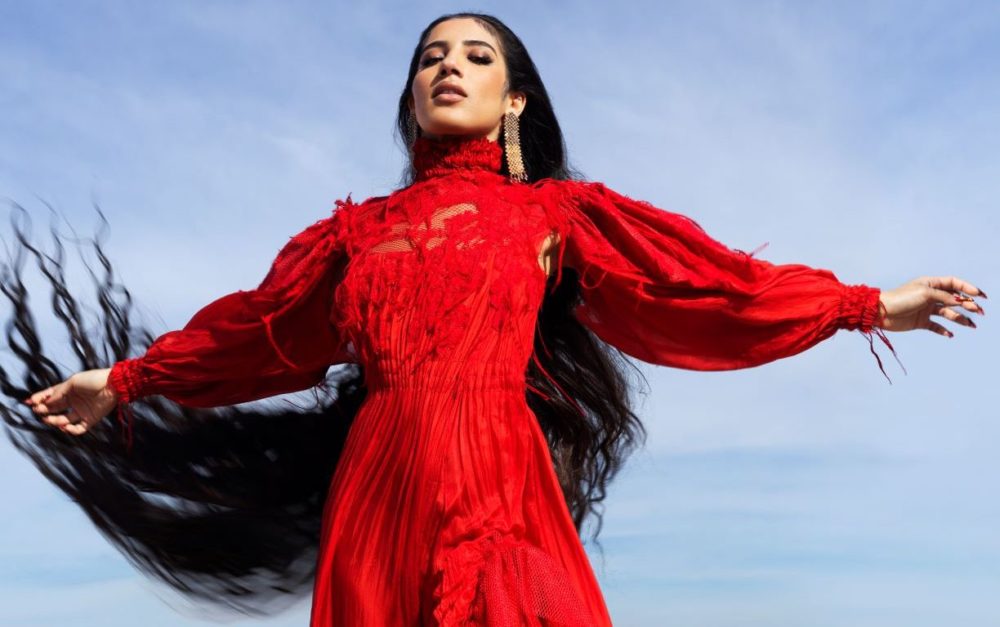 Moroccan-American singer Abir challenges common notions of what it means to be a woman of Arab descent, and her latest EP Heat embodies this defiance. The EP, a followup to 2018’s Mint, was born from Abir’s simultaneous interest in mainstream pop, R&B, and hip-hop as well as traditional Moroccan music, which she’d listened to growing up and later attending weddings and other events. She and producer Mick Schultz (Rihanna, Kelly Clarkson) used instruments like the bendir (a wooden-framed drum) and the oud (a pear-shaped, guitar-like string instrument) to create a sound that is new but classic.

In preparation for Heat, Abir took the initiative to learn more about music from Morocco and other parts of the Middle East; she cites Egyptian singer Umm Kulthum as one major inspiration behind the EP. “There was a lot of research and looking into different instruments — the Arab scale, the melodies, and looking at how I can bridge these two worlds,” she says. “It’s super thrilling to make them coexist.”

This merging of cultures is audible on every track on Heat, a title aiming to evoke the notion of combustion and “the beauty behind disasters,” she explains. The infectious, rhythmic “Pray for Me” combines familiar pop beats with traditional Moroccan instrumentals and dramatic harmonies. In “Searching,” mellow verses and dreamy echoes tell a relatable story of looking for light amid darkness. In “Inferno,” the first single off the EP, Abir’s voice soars and dips in a catchy chorus.

Abir’s music mirrors her own refusal to adhere to social conventions or be placed within a box based on her background. “I am an Arab Muslim woman, and I can also walk out here in a crop top and show up on stage,” she says. “I can still be Muslim, be Arab, be Moroccan, and live my life the way I want. The theme [of the EP] is empowerment and taking back that narrative. It’s important to share all perspectives so we don’t get narrow-minded; [there is no] one story of the Arab woman.”

Abir doesn’t always challenge stereotypes by speaking about them directly; she also does so just by singing about the complexities of her own life. “Sometimes I’m loud, but also sometimes, I put the identity to the back and just speak as a human,” she says. “I think it’s important to remember that when you speak about representation of women, at the end of the day, I’m just human and I have the same feelings as anyone could have. I have heartbreak. I feel like I want to be single. I feel the same shit that women all over the world have the ability to feel. I share my perspective, and I hope that it inspires other Arab women to share theirs so we have way more perspectives on what an Arab woman is outside of this shit you see on TV of Arab women being oppressed or Arab women being terrorists.”

The NYC-based artist also aims to make people rethink their assumptions about women in general. “Inferno,” for instance, was written with the intention of reversing certain gendered relationship scripts. In it, Abir sings to a suitor about not wanting to get into a relationship: “Sorry I don’t text back or answer your calls/I can’t be who you want, no, I don’t wanna play the part.”

“Women are always on the losing end, always seeming to be the ones that are heartbroken, or the guy doesn’t want to be with you because you want to be in a relationship but the guy’s not into it,” she says. “That’s not necessarily the truth. We’re in 2020. Women are heartbreakers. At least the people I’m around, my friends and family, we’re strong women who aren’t waiting on a guy to say if they’re ready for a relationship. We control whether a relationship gets serious or not. In this case, it was kind of that idea that it’s just not for me, playing this role of being a girlfriend at this moment.”

The video for the single was aimed at portraying powerful women, particularly Muslim women, as well as quite simply making “a fucking clusterfuck of shit,” as she puts it. Filmed in the Moroccan desert, the plot is supposed to be ambiguous so that people can read their own story into it. The one thing that was very intentional? “You just see women in an empowering light, and the men are an afterthought,” she says. It was also important to her that all the people she worked with on the video were of Arab descent, she adds.

She and Schultz are already working on her next project together, which continues her mission of melding Arab and American sounds. “We’ve come such a long way, and it’s a journey I’m so here for,” she says. “I want to be on this journey forever. We’re only going to keep learning more and more.”