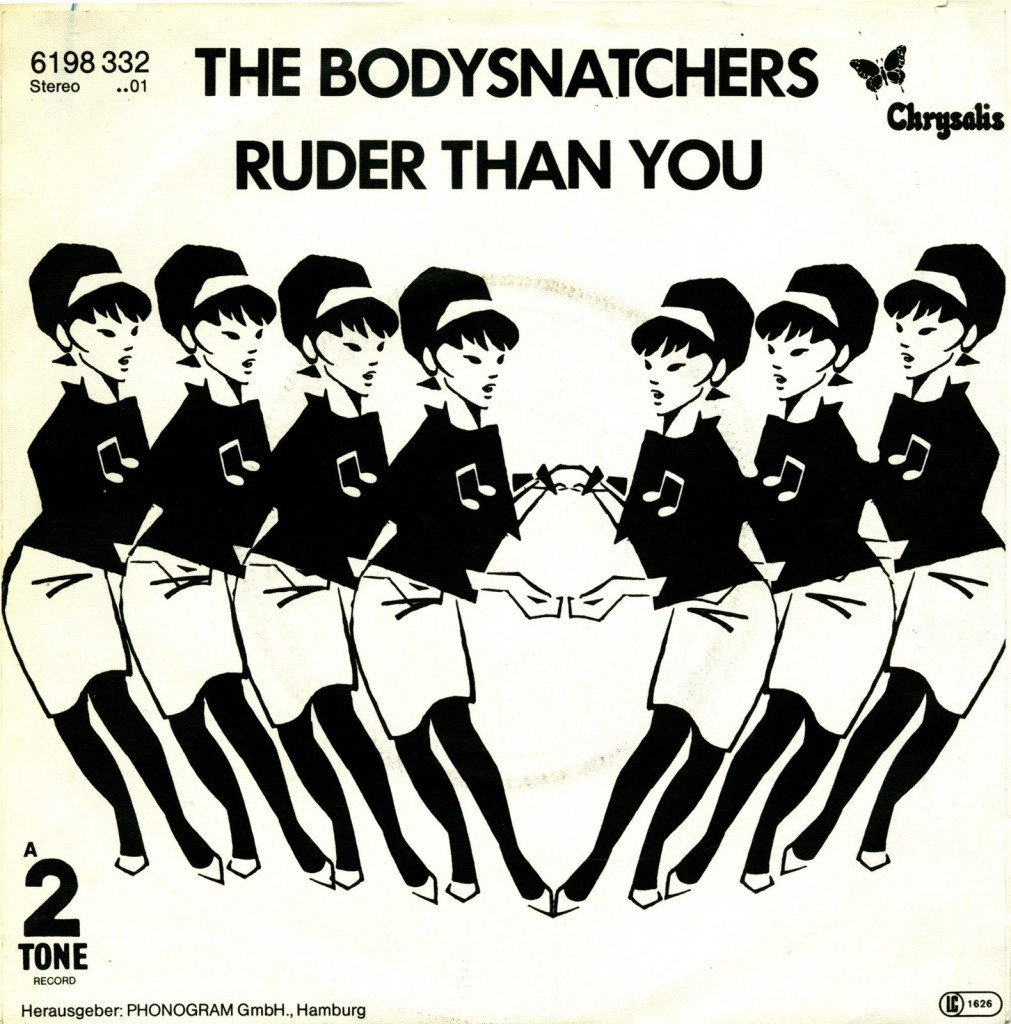 Originally I was planning on writing this week’s FlashBack Friday on The Specials’ sophomore album More Specials. I own the record on vinyl, and am more than familiar with it, but I was primed to do some research anyway. I was in the middle of reading the generic titles and associations: “2-tone movement,” Madness, The Beat, Chrysalis Records, etc. when I came across a new name: The Bodysnatchers…The Bodysnatchers??? An all-girl ska/2-tone band from London couldn’t be more perfect for our weekly nostalgia bomb here at AudioFemme. My first question was: how had I not heard of these ladies?

So I was reading up about More Specials, looking through the track list, and I noticed that the female vocals supplied on one of my favorite songs on the album, “I Can’t Stand It” belong to Rhoda Dakar of The Bodysnatchers. It’s not such a surprise that these gals slipped under my radar for this long-they played together for less than two years between 1979 and ’81, releasing a few singles but no full length LP. The band’s singles were all released in 1980, their biggest hit being “Let’s Do Rock Steady” which reached number 22 on the U.K. charts that year. Other singles included “Easy Life,” “Too Experienced,” and “Ruder Than You,” the latter being a Double A side with “Let’s Do Rocksteady.”
All of these songs are pretty mediocre and commercial, with the mild exception of “Ruder Than You.” “Let’s Do Rocksteady” sounds like a cheesy record exec’s idea of 2-tone hipness; it’s like an early eighties version of The Twist. Of course, the band’s greatest song was swept under the rug due to its controversial subject matter and rough sound. “The Boiler” is a true argument for songwriter’s intuition. Prior to writing “The Boiler” The Bodysnatchers only performed Ska covers, and the song remains the first and best track the girls ever wrote.
Sung by Rhoda Dakar in the first person, “The Boiler” is the narrative of a young girl with typical Western self-esteem issues. She compares herself to the shelved, unwanted likes of “ an old boiler “ and is wooed by a tough guy who eventually rapes her. This wasn’t exactly the sort of thing Chrysalis Records was looking to push in 1980, so they demanded that The Bodysnatchers record the watered-down “Let’s Do Rocksteady” in its place. Aside from ultimately censoring a group of women who had a legitimate message to send to their audience, Chrysalis robbed the Ska-listening public of a wonderful track.
The Bodysnatchers never did get to record “The Boiler” as a group, which is a shame considering the impact it would have made coming from an all-female band. The song only exists as a bootleg live version and an un-released John Peel session, which I’d love to get my hands on. Rhoda eventually recorded the song with the bulk of The Specials in 1982 and released it on the 2-Tone label. The ensemble performed as Rhoda with the Special AKA, and while their version is haunting and certainly worth a listen, I personally prefer the organ-heavy, distorted bounce of the bootleg version.

Dakar’s vocals on The Bodysnatchers’ ‘Boiler’ are crisp and Cockney, and despite the song’s heavy lyrical content, it’s doubtless a dance track. The idea of skanking to a song about rape does lend this version a complicated air-I supposed I’d feel a disconnect between what my ears were processing and what my feet wanted to do-a real dilemma in moral ambivalence. This may have been the reason the version recorded in 1982 with The Specials took on a more somber, eerie quality. The consistency between sound and subject matter is much more digestible in the latter recording. Be sure to listen to both below:

Rhoda with the Special AKA:

Though they occupied a sliver of real estate in the saga of the 2-tone movement, The Bodysnatchers left their mark with a killer song. Afterall, it’s the tiny pearls that get lost in the oceans of music history that excite me, and I’m glad to add this one to my collection. Six-degrees of separation is a fitting game for the music industry, and The Bodysnatchers opened for some of the most influential groups of their era, including Shane MacGowan’s The Nips, The Go-Gos, Madness, and The Specials. They even played the same bill as Toots and the Maytals, and got a gig performing at Debbie Harry’s birthday party in ’79.
You go girls.