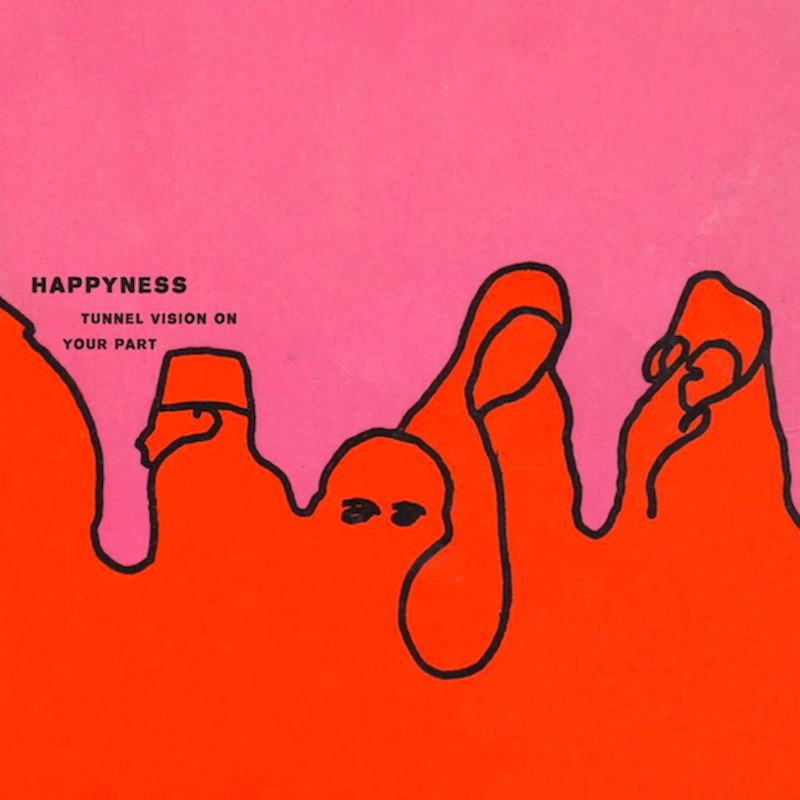 When you were a kid, did you ever play with cornstarch and water? Some of you will think that is the most backwoods bumfuck thing you’ve ever heard, and others will know what the hell I am talking about. The thing about cornstarch and water is, it denies an absolute form. When you grasp it between your hands in a bowl it is chalky and solid, but when you lift it up, rivers of viscous white fluid run between your fingers.

It is this very conundrum of physics that comes to mind when I listen to Happyness, the London trio who recently released five-song EP Tunnel Vision On Your Part via Moshi Moshi Records. This record, much like their debut LP Weird Little Birthday bludgeons me with immediate satisfaction. I can say instantaneously, without a scrap of doubt: “I like this. This is good. This is different.” It is solid opinion, fully formed between my hands and in the bowl. And yet the moment I pick it up for closer examination, everything dissolves in my palms. Why is it good?

A sound you can’t quite put your finger on is the best and the worst thing that can happen to a music journalist. Though Happyness have been basted with descriptions like “laid back,” “slacker,” and most abhorrently, “chill,” I really can’t agree. There is more complexity at work here…more thought. When I listen to Tunnel Vision I don’t hear three happy slackers, but rather a team of gifted songwriters who know their way around hooks, texture, and a killer synth line. I doubt that they cut their teeth by slacking off and copying Pavement.

There are a few lovely things I can point to on this record, one being its steady warmth. There is a consistent shade of rose tinting these tracks, and a fuzz quality that’s equally cozy – as if the boys wrapped their amps in angora sweaters. The opener, “Anna, Lisa Calls” is a melancholy pop cut that has me wondering if the Beach Boys, Blonde On Blonde, or Elvis Costello were on rotation while recording, especially with those swerving, heartsick synths that remind me of Steve Nieve or Al Kooper organ parts.

The record seems to hang its head lower than Weird Little Birthday, its tone far more heartbroken than the snotty and wry debut. “Surfer Girl,” is a sleepy-eyed sad song that turns my Beach Boys suspicion into a theory. It is a washed-out, doo-wop waltz, complete with shore-encroaching waves and forlorn vocals.

At Tunnel Vision’s center is the infectious “SB’s Truck” which was the EP’s leading single. It is a lush ear-worm, spinning out a continual closing phrase that is bound to remain lodged in your head: “I come ‘round here/no real damage/movin’ in around my home.” Or at least, that’s what they seem to be saying in their trademark mumble.

Signing off is the title track: a straightforward dazzler that gets me hung up on the keys again. Whoever is writing these keyboard lines should probably keep their distance from me, as they seem to understand the fine wiring of my heart and could potentially cause an electrical fire.

I don’t feel any closer to coming up with a bar graph of reasons why I dig this band. But maybe digging something and not knowing why is the ultimate kind of adoration. Blind faith so to speak. After all, art isn’t about logic – it’s about instinct.