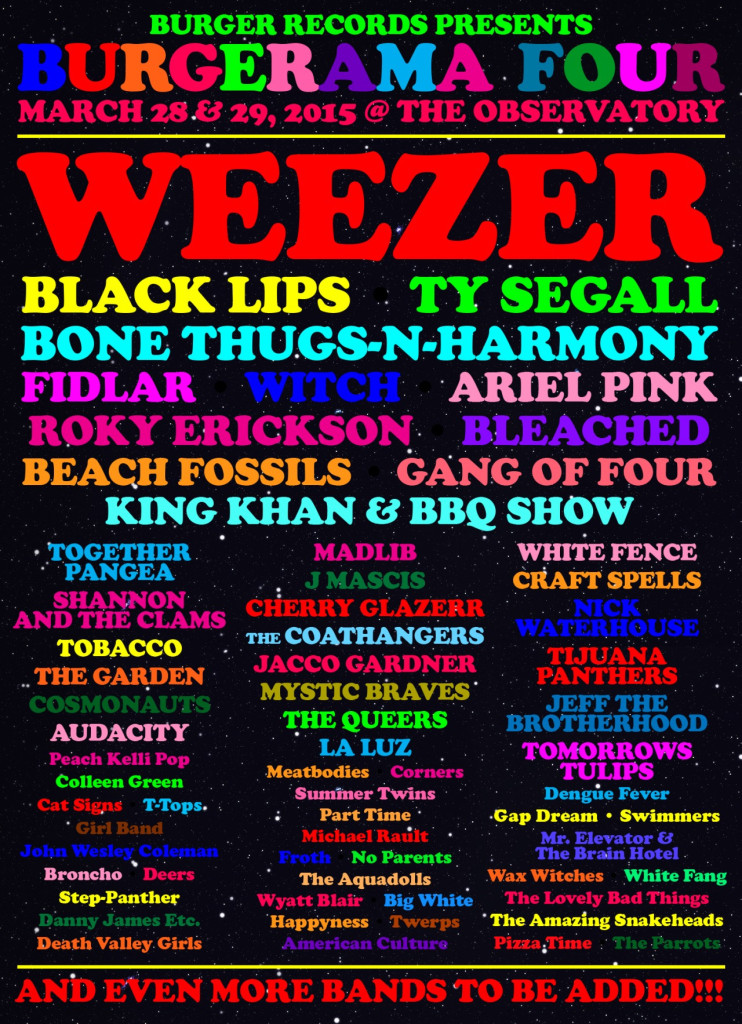 For those of you not too familiar with the DIY whirlwind that is Burger Records, it is a Fullerton, California-based independent record label founded back in 2007 by Sean Bohrman and Lee Rickard. Burger is most well known for taking the off kilter route of releasing most of their material on cassette. This year marks their fourth year hosting the Burgerama music festival, which this year seemingly has their most impressive lineup yet. Held at the Santa Ana Observatory, it is quickly approaching on the weekend of March 28th and 29th. Other than the duh-worthy ripping main acts, here’s a list of bands us West Coast femmes are stoked to see.

For a band that was supposedly formed as a joke, their record certainly doesn’t sound like one. Froth emulates a well done version of the garage, surf, psych, and drone-sounding rock that is consuming the Southern California music scene right now. They definitely throw a little twist in their sound, though, with the use of an omnichord. Here’s a new track Burger uploaded on their Soundcloud a month ago titled, “Postcard Radio.”

These Los Angeles-based, wacky psychedelic dudes, sound exactly like what you’d think a band playing a similar festival set in the Sixties would sound like. We are so okay with that. Here’s them performing, “When the Morning Greets You With A Smile” for the video series Jam In The Van from last year’s Burgerama.

The always badass Atlanta-based trio, The Coathangers, are a longtime AudioFemme favorite (they headlined one of our showcases last year). Yes we’re biased, but with good reason. From their 2009 full length, Scramble, to their recently released cover of The Gun Club’s “Sex Beat,” their set is bound to be seamlessly chock full of dance-y punk hits.

Tim Presley is the blast-from-the-past prolific psych band that is White Fence. With almost all of his past releases recorded in his home, Presley helps to emulate what Burger Records seemingly stands for. Here’s a stream of his most recent album titled, For The Recently Found Innocent. Smoke a bowl and enjoy.

Fronted by Chad Ubovich, guitarist of Mikal Cronin as well as the bassist for Fuzz, Meatbodies is a guitar heavy Jay Reatard lovers dream band. With their first album just released in October, this band’s buzz is about to explode. Highly suggested set to see for all of your head banging pleasures. Here’s a live video of them performing “Mountain” on KEXP Radio.

The always killer Jeff The Brotherhood, who recently announced being dropped by Warner Brothers Records, are releasing their new album (coming out just a few days before the festival) on Infinity Cat Recordings. With all of the excitement of a new start for the band as well as a new album, their set that weekend will not be one to miss. Here’s their new track featuring Ian Anderson of Jethro Tull on flute titled “Black Cherry Pie.”

La Luz is a Seattle-based surf rock band. These girls’ mellow beach vibe is danceable and to blatantly put it, fun. La Luz, which translates to “light” in Spanish, perfectly emulates their vibe during live performances. This is their beautifully hazy video for their most popular track, titled”Call Me in the Day.”