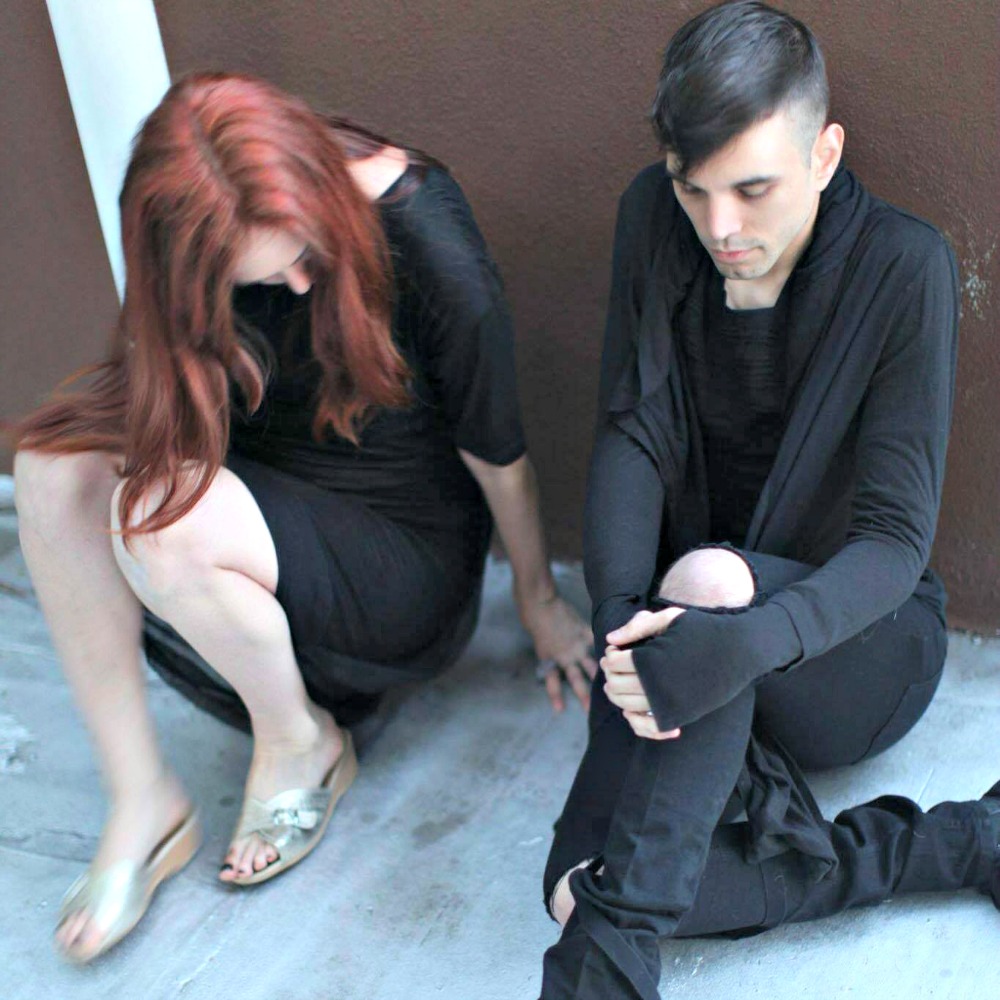 Sorry For Your Loss, the debut album of the ‘occult electronic dance music’ duo A Place Both Wonderful And Strange, is like an eerie journey into a dark forest; it’s terrifying, yet beautiful, and you can only arrowope you’ll make it out alive. This duality in Niabi Aquena and Russ Marshalek’s music perfectly fits the duo’s Twin Peaks references. “Pedestal” prominently features longing vocals and mysterious whispers provided by Niabi, while the sounds of wind and static surround her. The song’s theme is echoed in the last track, “blue is like drowning and drowning is like this.” “DONT,” however, shrugs off beauty and is straightforwardly creepy, with a taunting, sinister voice and an accompanying music video that shows religious fervor in a darker light.

Though they have a lot of upcoming projects in 2016, Niabi and Russ took the time to talk to us about the occult, their love for dogs, and how they started their duo (you’ll find a stream for Sorry For Your Loss at the bottom of the page).

AudioFemme: How did you two meet?

Niabi: We’d begun the dialogue of wanting to work together after he booked my solo project for a Tori Amos covers night of her album “Under the Pink.”  I covered “Icicle” and Russ covered “The Waitress.” We both gravitated, as individuals, to a more beat-orientated, abstract version of our covers, so when he asked if I’d be interested in joining him, it felt quite natural and logical.

Russ: When I moved to New York I was throwing shoegaze parties, and Niabi, ever the shoegaze aficionado, would come out. When my former band played our second 92Y Tribeca gig and were asked to curate a night of moody, Lynchian music, we booked Niabi’s solo project and she got a great response. We tossed around the idea of making music together for a long, long time, but we finally started poking away at it at the end of last year. The energy just felt right so we figured we should at least nail down the tunes we had made together.

AF: Where are you from originally?

Niabi: I’m from the Shenandoah Valley, in Virginia. We’re talking very rural here. I grew up on a dirt road and my address was a route number. We heated our home with a wood stove; my mother being the one, as a single parent, to chop the wood. There was no cable, no internet. I wouldn’t trade that experience for anything though. I feel very lucky and grateful to have the upbringing that I did.

Russ: Atlanta, Georgia. I miss it at times. I sometimes wonder if I’d tried harder down there if I could’ve had the successes I’ve had in New York. Sometimes I fantasize about taking my band and my dog and my fiancee and running away back south.

AF: You call your music a “raw, visceral mess.” Can you expand more on this? How does it affect your art, and life in general?

Niabi: After playing in a bunch of bands, including my solo project, I got so tired of striving for perfection. I felt real dismay, not feeling like I could be more playful and experiment without major judgement from others and myself.  So now working with Russ in APBWAS, it’s wild and I don’t really know how it happened, but I feel so free to be myself and be experimental without fear of failure.  If something doesn’t stick, it’s okay, and when it does – holy hell how neat.  So everything has gotten a lot more raw and a lot more natural, [fusion_builder_container hundred_percent=”yes” overflow=”visible”][fusion_builder_row][fusion_builder_column type=”1_1″ background_position=”left top” background_color=”” border_size=”” border_color=”” border_style=”solid” spacing=”yes” background_image=”” background_repeat=”no-repeat” padding=”” margin_top=”0px” margin_bottom=”0px” class=”” id=”” animation_type=”” animation_speed=”0.3″ animation_direction=”left” hide_on_mobile=”no” center_content=”no” min_height=”none”][both] in our process of creating and certainly when we play live as well.

Russ: I have no formal musical training, which probably won’t come as a shock to anyone. So a lot of my creative process is literally slopping around in ephemera, taking samples to places where they’re unrecognizable, crafting sounds based on how much I can possibly tolerate. Niabi’s the first person I’ve ever worked with who can, well, work with me in this way. For me, it’s how I live my life, too. I live and love big, messy, and without apology or forethought, and I think that reflects in the music, as well as the performance. We’re two people but we’re big, loud, and messy. 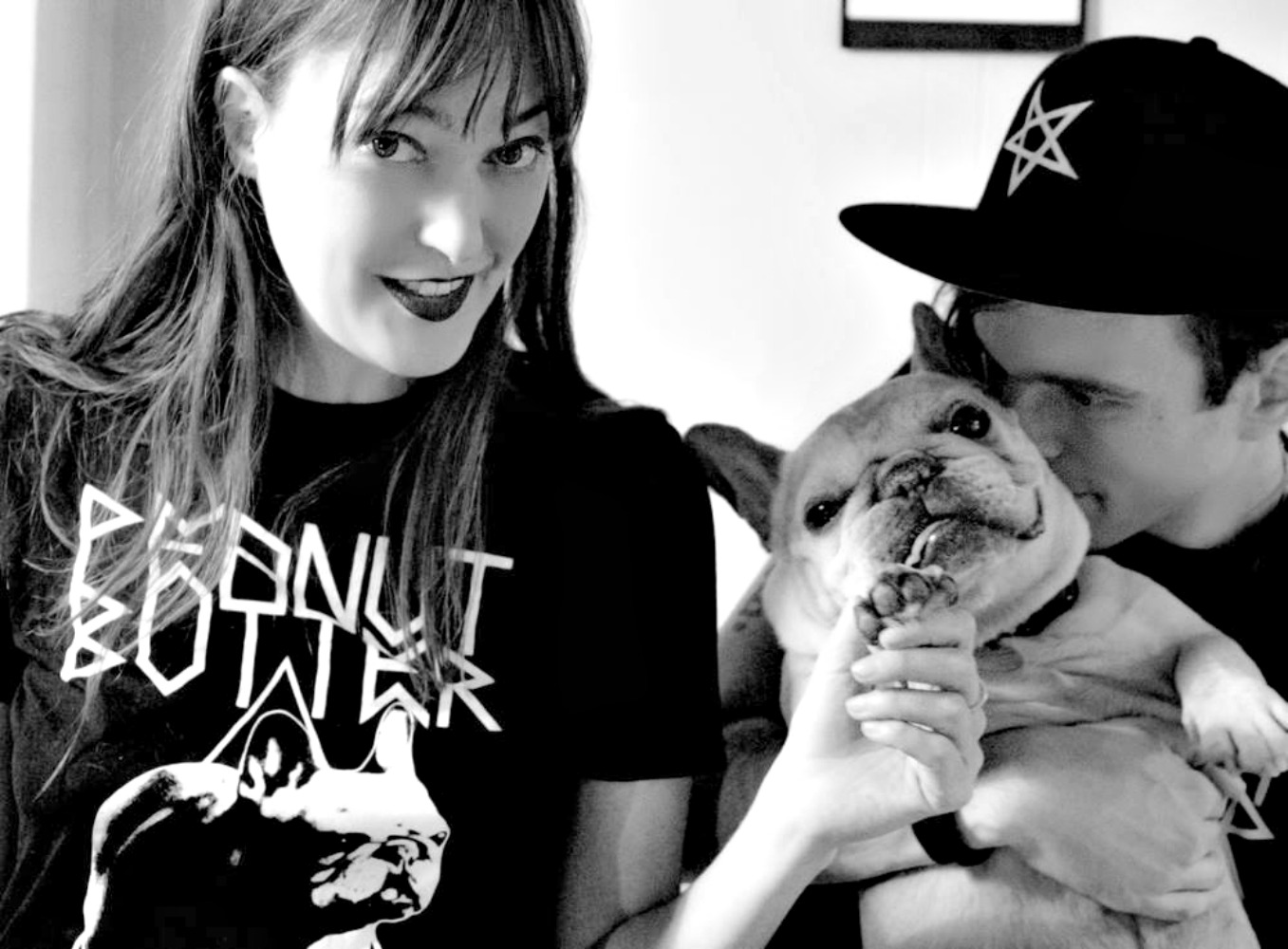 AF: I read about the Goths for Dogs show you were involved in. It’s an amazing idea- though, since you describe your genre as Occult Dance Music, I thought you’d be more into cats. Which animal is your favorite, and why?

Niabi: I love all animals, it’s difficult to name one as a favorite. Right now, I only have a dog. His name is Odie and he’s a blind senior with many missing teeth. “Goths for Dogs” raised money for both of the rescues where we got our current animal friends. To quote one of my favorite art films, Nadja: “I have walked behind the sky, we are all animals.” So that is my answer.  There is no favorite, we are all animals.

Russ: I fucking hate cats. As a dear friend said, “If I wanted to throw money at something that doesn’t care about me, I’d invite a man over.” I definitely didn’t choose my dog, Mr. Frito Burrito, he chose me, and he is my favorite animal. He worked on a video with us for Goths for Dogs, by the way:

AF: In your music video for “DONT,” I really liked how you placed such a dark, moody song over the religious archival footage. I was wondering if you could explain: Does association with the occult mean a different kind of religion, or the absence of religion?

Niabi: I’d say a different sort of religion. I’m deeply spiritual of a person, gravitating towards a more Wiccan practice of earth based ritual. The moon and recognition of celebrated earth holidays, solstices, and equinoxes are a very big part of who I am. Of course I am referencing of some very old knowledge here that is actually the influencer of modern Christianity. The thread between paganism and Christianity is not only tangible but historic.

Russ: For me, the occult association is a different kind of religion. Practicing witchcraft, for me, is about personal empowerment as well as appreciating the forces that are beyond my control. It’s made me a much more grateful person.

AF: You picked a great band name. What is the strangest place you’ve been to, or situation you’ve found yourselves in? What about wonderful, or beautiful?

Niabi: It takes a lot for me to consider something strange. Although if I would have to, I’d say humans’ gravitation towards negativity and hatred.  I don’t understand how others intentionally try to hurt people. In risking like sounding like a total fucking hippy, I just wish there could be love everywhere and with everything. On beauty, I’d like to offer another quote that I’ve held for many years. I adore mid century art and design and of course love Charles and Ray Eames. I think that he nailed it when he stated that he wanted to find “the uncommon beauty of common things.” Beauty is everywhere if you just open your eyes and look.

Russ: Without getting into it, I every so often have extreme auditory hallucinations. And definitely that is the strangest, because suddenly, in the actual tangible physical world, I experience the deepest and most terrifying parts of my brain, the parts even I keep secret from myself, acting as though they’re real, and present. Some of it is what bleeds into our song “Way Out.” For beautiful: Iceland. Iceland Iceland Iceland. We’re trying so hard to get into Airwaves [Music Festival] this year.

AF: What can you tell us about your upcoming projects?

Niabi: There’s much on the docket for 2016, personally I’m very excited. Our second album is to be recorded upstate in a real cabin with a real wood stove, which I’m very excited about given my mountaineer-woman upbringing.

Russ: I’m terribly influenced by our friends/mentors-of-a-sort Azar Swan, and they talk about their upcoming albums by labeling them LP#, LP#, etc, until they have real names, and so I’ve taken to calling everything LP2, LP3, and LP4, because those are what’s on the docket right now. LP2 is going to be recorded in a house up in the fuck-off woods of Phoenicia, a place that’s really magical, and it’s going to be a version of our touring Keys Open Doors: Hidden Life of Laura Palmer show.

Niabi: During the recording of our second album, we are also going to play with the beginning songs of our third album, which will be more of a collaboration with Vanessa of The Harrow and Synesect and the magical Shanda.

Russ: LP3 we’re writing and recording with Vanessa Irena aka knifesex, aka my fiancee, and our dear friend Shanda. Niabi and I really want to try and make that one an album that’s very much taking the idea of weird electronic dance music and applying some song structure to it. I’m thinking huge, world-stopping choruses.

Niabi: Our intention with the third album is for something more structured, slightly more commercially accessible, with songs that have a chorus and maybe a bridge.  Our fourth album will be recorded at the end of the year, however at the moment I can’t say anything more beyond that we have a very exciting producer who we’re working with and it’s going to be incredible.