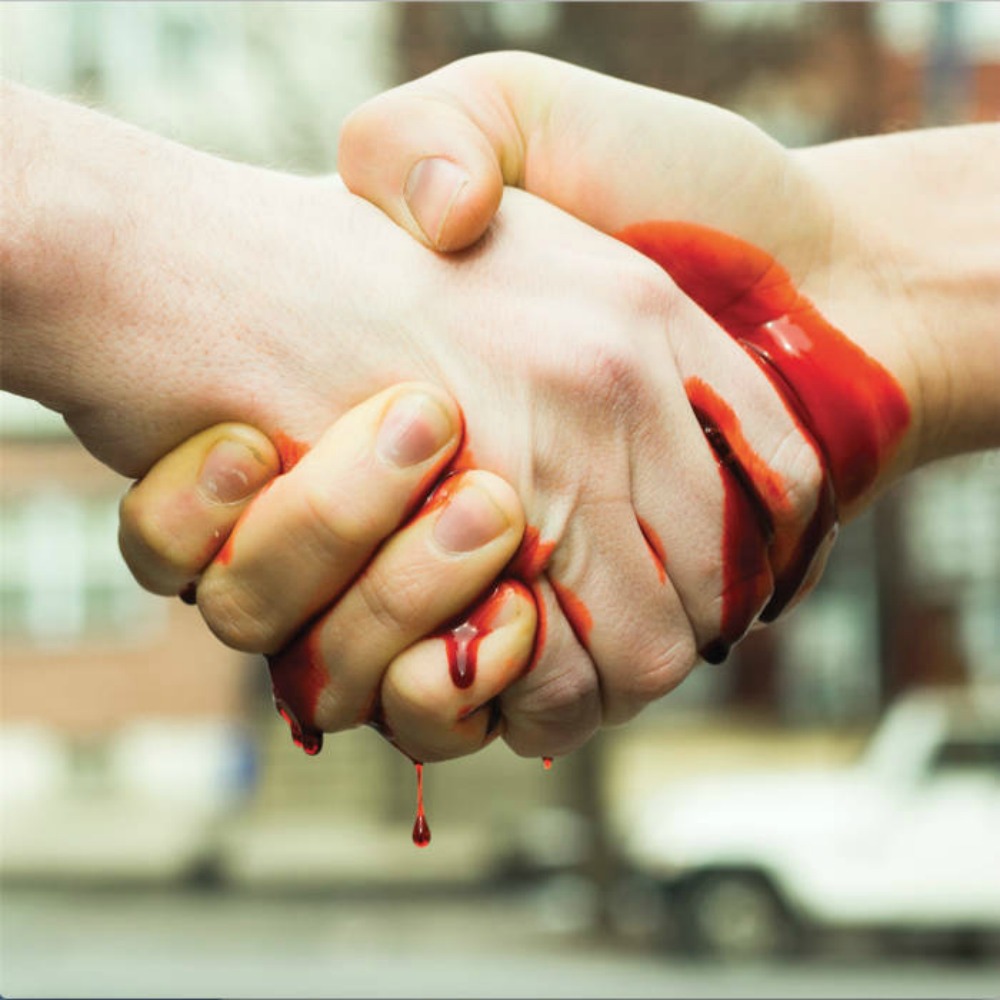 The main members of  Lithuania are involved in other, vastly different projects: Dominic Angelella plays in the psych-rock band DRGN KING, and Eric Slick plays drums with Dr. Dog. The pair have been friends since meeting at Philadelphia’ UArts, and though it took a decade of collaboration, they made a high-energy, raw album about their friendship, appropriately titled Hardcore Friends. After the record’s release in September, they went on a tour with Beach Slang that ended late November. After their set at The Knitting Factory last night, they shed some light on topics like when the next Lithuania album is coming out, what makes a hardcore friend, and what they think about Steely Dan. Read the interview and check out their album below.

Eric: “Holy Water,” yeah. We’re doing a new record, hopefully in the Spring. We already have about eight, nine new songs. The whole tour we just did with Beach Slang, we’ve been rotating these songs. It’s super exciting. It took us a long time to get the Hardcore Friends project to complete itself and this one’s coming along a lot faster. We worked on it on and off for about ten years.

AF: Whose hands are on the Hardcore Friends album art? Is that you two?

Eric: It’s ours, it’s Dominic and myself. It’s a fake blood handshake- that’s all corn syrup. We shot that cover in the winter of 2015. We were outside, doing the handshake, and it was… gross. Corn syrup all over your hands is gross, especially when it’s freezing. It wasn’t as glamorous as the shot looks.

AF: Since you and Dominic have been friends and collaborators for so long, what’s your definition of a good friend, or a hardcore friend?

Eric: The title is kind of a pun, because we grew up going to hardcore shows together. We had been through everything two friends could go through in the course of our friendship, and so when it came time to title the record we thought it would be appropriate to not only name the thing Hardcore Friends but to also have a song about the trials and tribulations of our friendship. So yeah, a hardcore friend is someone who’s loyal, somebody who will be there for you until you die.

AF: How was your tour with Beach Slang?

Eric: It was amazing. They were so gracious to take us out. We had an amazing time. Nothing bad happened, except that our heater broke in our van, so we were freezing cold from Michigan all the way to Boston.

Dominic: I had a moment with their record, because I hadn’t listened to it before we went on tour with them, because it wasn’t out yet. And when we got back and did Thanksgiving and put it on I was like, “Holy shit.” Because live, they’re so great, they’re so powerful, but the record is a totally different thing.

AF: And you said the next Lithuania record is coming out in the Spring, right?

Eric: We’re going to start demoing on Monday, and then probably record sometime in the Spring, and then hopefully it’ll come out in 2017. That’s my guess, or the end of 2016. I’m just gonna say it, and put it into existence, so that we get it done. And not wait another ten years before something happens.

AF: Will Ricardo (Lithuania’s touring drummer) be playing on that record?

Eric: Oh yeah. We’re going to fully integrate him. Hardcore Friends is only Dominic and myself, with some added guests here and there. We’re gaining more confidence with Ricardo on drums, and we’re excited to explore that realm. He’s so talented, and generous, musically.

AF: As a drummer, do you give him a lot of direction? Or do you let him do his own thing?

Eric: The whole thing with Ricardo in this band is for me to relinquish my control, and my more obsessive drum tendencies. I’m not going to direct him, I just want him to figure it out for himself. And so far, he’s been intuitive and I love what he does.

AF: Which do you prefer, being behind the drumset or fronting a band?

Eric: Apples and oranges. They’re so different. One offers a direct line of communication with the audience, and one’s a little bit abstract… being back there is kind of weird, sitting down and playing a bunch of weird circles. It’s a pretty abstract concept. But being upfront, you can make eye contact with people, and connect, and it’s just a totally different experience. Not better or worse. Both are great.

AF: You two met at UArts; did you study jazz guitar there?

Dominic: I did, yeah. It’s weird how much I still think about it when I play, even in this band. The stuff you learn sticks around. I’m sure you know what I’m talking about.

Eric: Yeah, I was improvising last night, and it brought me right back to when I used to do it all the time. Or even when I’m playing with Dr. Dog, it comes out.

Dominic: Whenever I see you play with them, I just think about Steely Dan, because you’re just playing sick, seventies Steely Dan stuff. Everyone is doing their thing but you’re just doing this shuffle.

Dominic: As we all do. We’re working on a podcast about Steely Dan.

Dominic: That’s what we’re going to focus on next year.

AF: Speaking of Dr. Dog, it seems like in recent years- maybe after you toured with The Lumineers- you’ve been playing way bigger venues, like Madison Square Garden, and Terminal 5.

Eric: Yeah. We did Madison Square Garden over the summer, and we’re doing Terminal 5 in March. It’s something I still don’t know how to process. I have no idea how we did it. We’re about to tour, two weeks on, two weeks off for the next couple of months. This year we’re going to have a pretty crazy stage production and do new songs.

AF: Do you think you’d get restless if you weren’t involved in more than one project?

Dominic: I used to feel that way. I used to do three to five projects at once. And then recently, I’ve been really into focusing on one, as long as that thing is active. As soon as it isn’t active I need to do something else. It’s been cool, figuring out how to sustain yourself on only music. It’s a hustle, but it can be really rewarding.

AF: I’ll wrap this up with one more question: What bands or records are you into right now?

Dominic: Like a 30-second Super Bowl commercial, where you’re the proggy Zappa guy and I’m the beer-rock dude. “We don’t agree on much, but what we do agree on is Cass McCombs.”

Eric: There’s so much music to listen to.

Dominic: There’s a quote, like “I would gladly give up my space in a band if there could only be 100 bands.” And occasionally I’m like, maybe I feel that way.. But I don’t really. I wouldn’t want to stop playing.