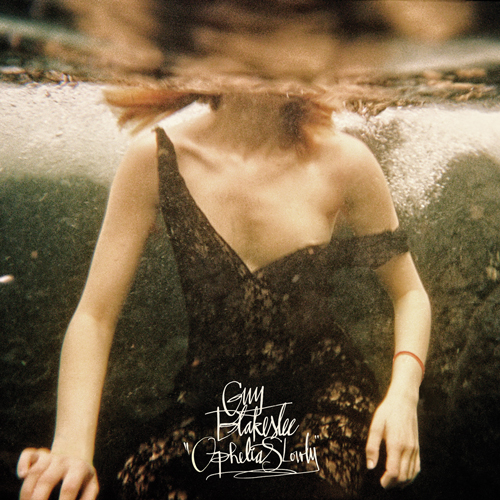 Whether performing with a trio or a quartet or semi-solo, whether in full psychedelic mode or reinterpreting the blues, Guy Blakeslee has a fantastic knack for making music that sounds haunted and doomed. June 10th marks the release of Ophelia Slowly, which, though not Blakeslee’s first solo release, is the first to come out under his real name instead of some permutation of the stage name Entrance. It hasn’t been long since Blakeslee released a record–The Entrance Band’s Face The Sun came out last November–and both that album and Ophelia Slowly chronicle a journey out of darkness and tumult, and into the proverbial light. Blakeslee has a history of substance abuse and was struggling to get clean when he wrote many of the songs on both these albums, so it’s natural that they would share a preoccupation with the material, but Blakeslee manages not to repeat himself at all with the release of Ophelia Slowly. Face The Sun was a rock album, heady and guitar-driven, with watery melody lines and psychedelic wah-wahing that trafficked in symbol and metaphor more than it did straightforward storytelling.

But on Ophelia Slowly, Blakeslee’s voice and lyrics become the focal point of the music. In the interest of holding the spotlight on the story line, Blakeslee keeps the music very simple, and many of the songs–“Smile On” and “Ophelia Brown,” notably–maintain a straight, sing-song-y structure that recalls elements of his early work, back when Entrance was a solo project and Blakeslee liked to reconfigure the blues and give it a psychedelic twist. However, despite the simple rhythms and emphasis on narrative, there’s little on Ophelia Slowly that’s musically reminiscent of the blues–the album’s foundation consists primarily of looped synth lines and an unassuming drum machine track.

Blakeslee has long been fascinated by states of trance. This album–which is, essentially, his version of an introspective, songwriter-y project–concocts swirling, circular guitar parts and a tightly rhyming vocal line that escalates, like a spiral staircase, as it moves from phrase to phrase. For Blakeslee, the music tells a story best once it’s in this hypnotic state. This concept is familiar turf–in the twenty years he’s been making music, Blakeslee has perfected the trick of creating a whirlpool inside a song–but Ophelia Slowly manages to maintain this churning, circular state for almost the full length of the album. That’s not a complaint. Actually, it’s impressive that the record’s repetition never wears out its welcome. “Told Myself” is a great example: with quiet, whining anguish, Blakeslee plays with the phrase “You were true and a liar too,” shifting meaning and replacing a word occasionally as he relentlessly repeats the lyric. “You were clean and a junkie too,” the song finally concludes, in the same stretched-out, high pitched melody, over a strummed acoustic guitar. They’ve got potential for melodrama, but in Blakeslee’s hands, the songs are beautifully ragged. As a collection, Ophelia Slowly is foreboding, not too optimistic, and full of compelling grit and fatigue.

You can check out “Kneel & Pray,” off Ophelia Slowly, below. The full album will be out June 10th.