I first saw Reptar when they opened for Foster the People on their fall tour last year. It takes a lot for me to notice a band that is opening for an artist or group whose album I have memorized from the first to last notes, but Reptar possesses exactly that kind of high energy, enthralling dynamic that makes you wonder who you even came to see in the first place.

A year later, I’ve gained a more intimate relationship with their tunes and finally got the chance to see the Athens, Georgia quartet again. This time around, they were accompanied by Stepdad and Rubblebucket at the The Bowery Ballroom on a freezing cold November evening. In between my  first to the second experience, the band has grown – both in the musical quality and the number of musicians on stage. What was once a show featuring a few boys with their instruments on stage has turned into a fuller experience complete with blaring horns and some vocal distortion.

It’s reminiscent of the way they grew after their first EP, Oblangle Fizz Y’all!, which feels minimalist in comparison to the lush layers of sophomore release Body Faucet. The new music tastes like ’80’s kitsch on a funky plate and, like their older songs, is yummier when experienced live. The band radiates a neon-bright vibrance when on stage and with additional members joining them on tours, everything feels even more like a clusterfuck of childish excitement which their name already throws back to. 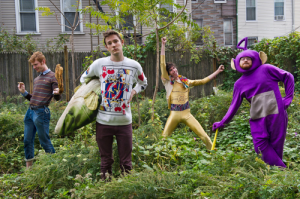 Sweeping through songs off of both releases, Reptar bounced and screamed and danced and invited the entire audience to the strange frat party they seemed to be throwing at that very moment. Several times throughout, lead singer and guitarist Graham Ulicny’s twangy screams of lyrics would become a complete mess of syllables and sounds that helped build their charm. They’re messy, dirty, and ridiculously fun, and that’s what makes Reptar.

By the end of the night, Stepdad and Rubblebucket had joined Reptar on stage for an enchantingly chaotic few moments of communal good vibes. And maybe that’s always Reptar’s goal by the end of the show – to share their good vibes with a room full of people where it doesn’t matter what song is playing as long as you’re dancing. The audience has felt it both times I’ve had the pleasure of experiencing. In a smaller space, a show with this band feels like a group hug that ends in entangled bodies screaming and jumping up and down. It’s psychotically fresh and exactly what a live show should be.

While their music is better heard raw, unfiltered, and live, their initial EP and full-length album are as sweetly funky as they perform on stage. Check out these boys all over the web (and huge props to the genius who designed their throwback website) and make every effort to dive right into the middle of a Reptar dance pit when they come to town.