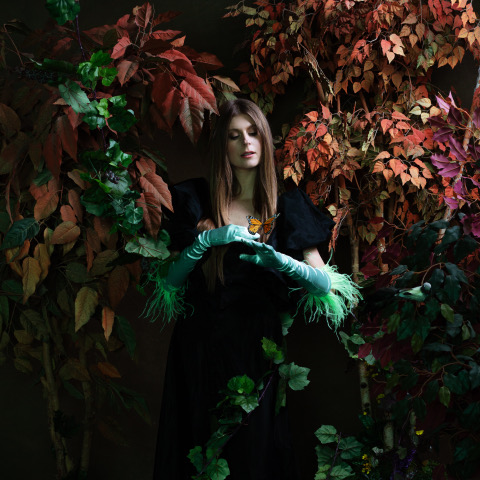 On Phantom Forest- String Remixes, Lydia Ainsworth pushes forward into 2020 with lush string arrangements performed by Toronto’s Venuti Quartet. The EP offers reinterpretations of four tracks from her 2019 album, Phantom Forest, that highlight the Canadian singer/producer’s background in classical and film music (she recently collaborated with Kyle Dixon and Michael Stein for “Earth Song” for the third season of Stranger Things) while maintaining a pop sensibility.

For the past half-decade, Ainsworth has been capturing the sound of modern introspection. Like her dark pop contemporaries– Austra, FKA Twigs and Sevdaliza come to mind– she vibes off an amalgamation of sounds that run the gamut from ’80s goth to ’90s trip-hop to turn-of-the-century experimental electronic music, infusing that mix with lyrics that are steeped in present-day feminism.

Her debut album, Right from Real, was nominated for the “Electronic Album of the Year” Juno in 2015 (and she was the only female artist in the category that year). Since then, Ainsworth has continued to forge a path of dramatic synthpop. On last year’s Phantom Forest, she explored themes of nature and technology in a collection of mellow, groovy dance tunes. With a voice that is, at times, reminiscent of Kate Bush and Tori Amos, Ainsworth can lead listeners into worlds that feel both mythical and very real. She does this with a knack for beats that are as suitable for listening at home as they are for a club. WIth String Remixes, Ainsworth places the emphasis on private listening, where you can stop moving and focus on her voice and lyrical content.

“Edge of the Throne” opens the collection, heard here as a slice of orchestral R&B that plays up Ainsworth’s strength and versatility as a vocalist. It ends with “Can You Find Her Place,” which removes the subtly funky beat of the album version to highlight the tenderness in her voice. These two tracks provide solid bookends for the EP, opening and closing a journey into another side of Phantom Forest.

The most radical transformation on the EP is “Diamonds Cutting Diamonds.” As it appears on Phantom Forest, the song is a darkwave jam with disco undertones. Here, Ainsworth ditches the dance beats and replaces the synth lines with plucky strings. The overall effect is a more cerebral listening experience, emphasizing the wildlife imagery and folk tale allusions in her poetry.

The string remix of “Tell Me I Exist” is sparse and highlights the existential dread of the social media age. Last year, Ainsworth noted that the song was about “the urge to be seen online at the cost of one’s anonymity.” In this rendition of the track, you can sense the aching in her voice as she sings, “Tell me I exist/Look what I’ve become/Prove that I’m still here/Prove that I’m enough.” On Phantom Forest, “Tell Me I Exist” is one of the standout tracks and this remix digs into what makes it so effective as a lament, grieving the loss of a time when we weren’t giving away privacy “likes”.