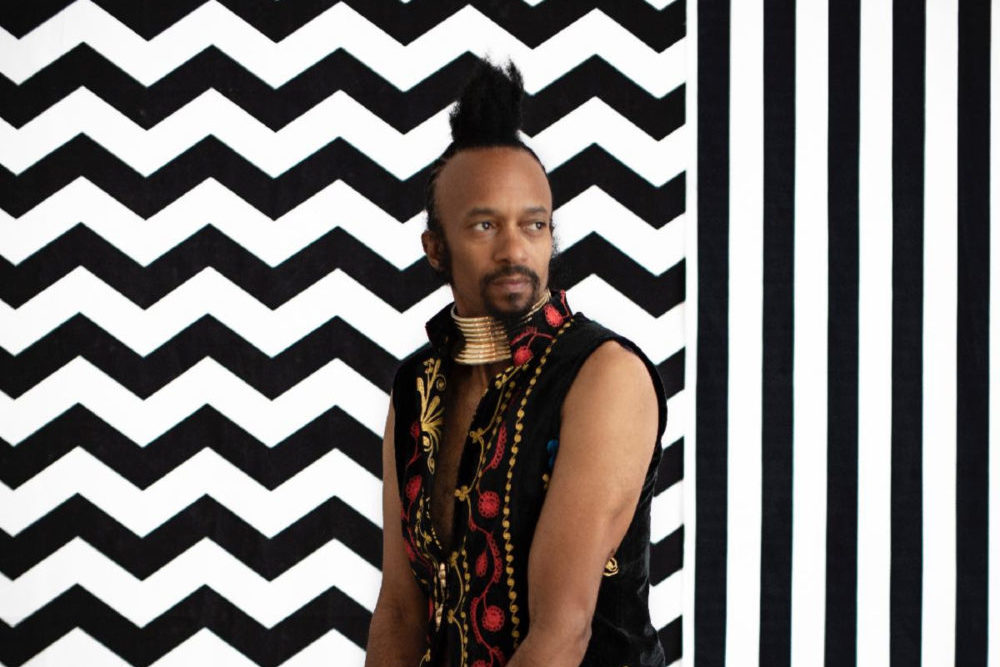 “I’m a busker at heart,” says Oakland’s Fantastic Negrito. “I started this [project] five years ago, busking — and I wanted to talk to people. The one thing I realized [is] that we need each other as people living on this planet…and if we don’t talk to each other, we don’t have anything.” Fantastic Negrito — birth name Xavier Dphrepaulezz —grew up on the very same streets he ended up busking on, and it is indeed with a palpable sense of place that he presents his new album Have You Lost Your Mind Yet?

Even his performance name has roots in his hometown. “I grew up in the hood,” he explains. “I was in close proximity to people who spoke Spanish, so [Negrito was] the name that I heard all the time.” Basically, it means “little black one.” “It’s a very endearing word in the Spanish language,” he assures me. And it came with an added bonus: “The name makes white people uncomfortable… the thing is, no one should be uncomfortable. They should just know more Latino people,” he laughs.

Drenched in old-school soul and rock influences, Have You Lost Your Mind Yet? may sound outwardly celebratory with its proliferation of heavy riffs and layered percussion, but in fact, Fantastic Negrito has taken on somewhat of a Herculean task with this album’s creation. “This record was all about mental health,” he says. “[But] not the people we see walking down the street talking to themselves, ’cause that’s easy. It was about myself, my cousins, my friends, my bandmates, my sisters, my brothers, my people, my teachers, my soldiers. It was about how are we everyday people dealing with this proliferation of information that we’re fed every day — especially in the United States — about these mass shootings, mass killings.”

Track three, “How Long?” takes on a particularly arduous challenge — getting into the mind of a shooter. “I’m like, ‘I need to get into their head. The shooter could be me. It could be the bass player.’ It’s the guy who killed George Floyd. Did he wake up that morning, wanting to take someone’s life? How do we dehumanize people to the point where we can easily take their lives?” It’s a dark question to inform a song, and the end result seems to be largely internal on Fantastic Negrito’s part, one that reflects the aesthetic of the album’s cover: bombast, theatricality. “To all my baby Al Capones/out there screaming all alone,” he croons on the opening line. The choice of Capone, a historical figure so cartoonized that he is almost a caricature at this point, is notable; Fantastic Negrito deals in colorful tableau as opposed to visceral grit. Not that this renders the imagery ineffective — his perspective is unassailable, informed as it is by lived experiences.

“There was so many tough guys in my neighborhood. But no one held the fabric of society together more than the strong mothers who had to bury their children because we have gun violence problems in this country that we haven’t addressed,” he says. He saw this firsthand, as well — his mother lost his brother to gun violence when his brother was only fourteen. Fantastic Negrito is happy to reflect upon and affirm his own masculinity —“self-reflection, and openness and kindness, and gentleness” are some of his key markers — but the undeserved burden of social responsibility placed on women is a thread that shows up in his work, especially on the LP’s fifth track, “Searching for Captain Save a Hoe.”

While the music video for his cinematic take on folk song “In the Pines,” from on his 2017 album, The Last Days of Oakland, looks to to peel away the layers of martyrdom and “exquisite suffering” that we place on mothers of murdered children (largely due to an excellent acting job by Renee Moncada McElroy), in “Searching for Captain Save a Hoe,” Fantastic Negrito takes another opportunity to slip into the mind of someone else — albeit this time, a different version of himself. “I’m writing [as if] I’m the whore — the so-called whore,” he explains, noting that the goal was to unpack “a lot of my hypocrisy about women.”

The song opens with a nerve-jangling riff that sounds like the theme music for the world’s funkiest closet monster. We get to hear the range of Fantastic Negrito’s voice over the course of the song, as well as the rap stylings of Bay Area rap legend E-40 (the man behind the 2006 hyphy-movement hit “Tell Me When to Go”). The choice to include the rapper apparently inspired some confusion. “People are like, ‘oh, man, you put rap on there?’ Well, I didn’t put it on there — it put itself on,” he says. “I embrace Black roots music. That’s an amazing garden. And I’m happy that people recognize me in the blues category. That’s fine — I just don’t think in those terms. I don’t like labels.”

For Fantastic Negrito, Black roots music — also the name of his excellent Juneteenth 2020 compilation EP — is more like an ever-shifting, multi-dimensional conversation than a genre. The key is, as he puts it, “be conscious in the spiritual world” during the creative process. And yet, this project seems too close to the chest — Fantastic Negrito produced every song— that the auteurship seems much more grounded that that. He is the man behind each hand clap, almost every lyric. Inspiration may be a vast and fathomless pool (he cites Robert Johnson, Charlie Patton, and Little Richard as some of the artists he holds in high esteem), but the end results still leave us with traceable threads, from the choral background vocals on the excellent and affirming “I’m So Happy I Cry” to the shades of “A Whiter Shade of Pale” on the opening notes of “King Frustration.”

One of Fantastic Negrito’s key strengths is the malleability of his vocals — he can sound like multiple different people on the same song, delivering even anxiety-inducing lines with a hint of humor and a palpable sense of movement. This comes to mind in the interlude “Shigamabu Blues,” which repeats the chant “All kinds of things can happen/in the world” to almost hypnotic effect. “Hasn’t the last six months told us that?” he asks. “Doesn’t matter who you are: rich, poor, movie star, conservative, liberal. Anything can happen to any of us at any time, and that’s very good.”