Rarely a night goes by in Bloomington without locals filling the basements of show-houses, bobbing their heads to punk, garage, and grunge riffs. Once a month, Rebecca recounts some of the live music highlights from the previous four weeks. Read and listen below for a bevy of Bloomington bands that should be on your radar.

“We need to see more girls onstage,” Wife Patrol bassist Nicole announced to the audience about halfway through their Blockhouse set last Saturday night. “And people need to get used to it,” she added, before diving into another grunge-heavy number alongside bandmates Natasha (drums) and Greg (guitar, vocals). Indianapolis-based trio Wife Patrol delivered an energetic performance of their original tracks –  an eclectic amalgamation of grunge, punk, metal, and pop – with some favorite new wave covers. Before they hit the stage, locals Justin Meier, Constance Marguerite, and Michael Pruitt of Solid State Physics opened up the night’s entertainment on a similarly energetic note. Their tight instrumentals and emblazoned vocals were made all the more impressive as the group played round robin with their instruments, shifting every few songs to present a new arrangement of guitar, bass, drums, and vocals. 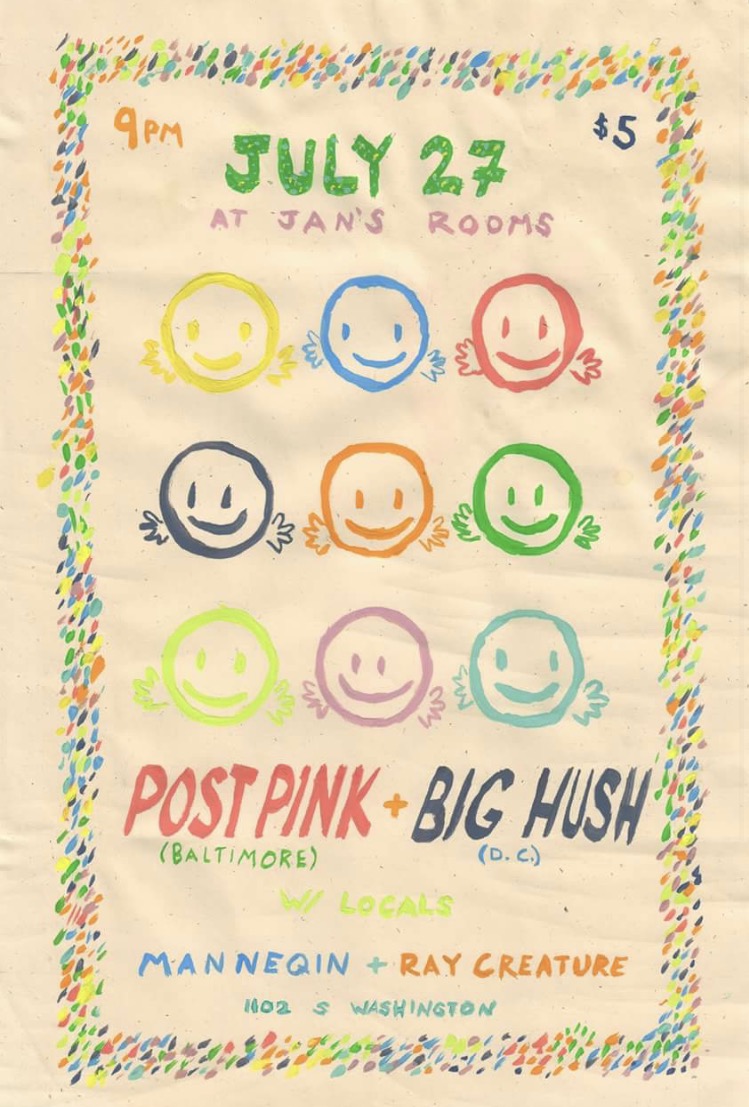 An impressive crowd came out for one of the last shows at Jan’s Rooms, a popular house show venue that has seen a number of acts come through its basement during its tenure in Bloomington. Local synth punk trio Manneqin opened the night before the touring acts followed. By the time I arrived at Jan’s Rooms, D.C. based quartet Big Hush was gearing up for their performance. Bandmates Genevieve Ludwig, Owan Wuerker, Chris Taylor, and Emma Baker dished out fuzzy and distorted guitar riffs atop multilayered vocals to the pleasure of all of the brave souls that packed into the hot and cramped basement on this especially humid Bloomington summer night.  Big Hush was followed by their tour mates, Post Pink, a pop-infused hardcore punk band out of Baltimore.

It seemed like the whole town showed up for this especially stacked lineup in celebration of Sodium, Dasher’s debut full length album. Sodium, which has been in the works for at least a few years now, represents the culmination of drummer/vocalist Kylee Kimbrough’s creative pursuits as she moved from Georgia, Atlanta to Bloomington, Indiana. Kimbrough, along with bassist Gary Magilla and guitarist Derek McCain, brought a fresh intensity to their blend of post-punk and hardcore set, a foundation that had already been laid by the night’s supporting acts. 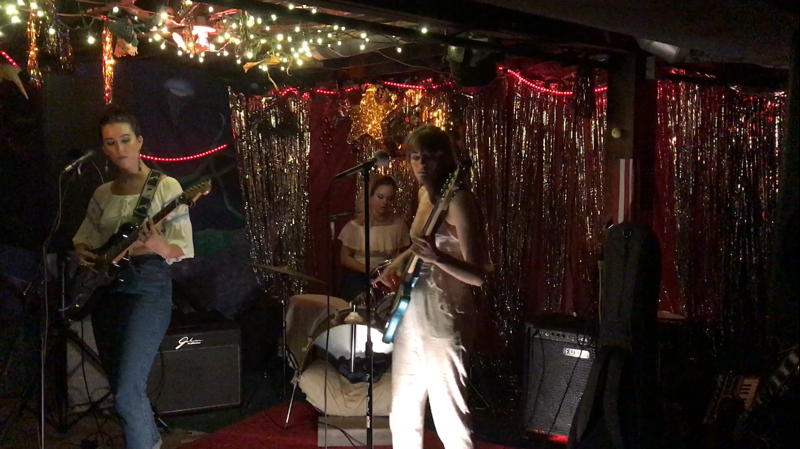 Those who weren’t in the basement of popular house venue the Dream last Saturday night missed the first and last summer show of Her Again, a Bloomington based trio consisting of Claudia Ferne on the guitar, Jordan Gomes-Kuehner on the drums, and Megan Searl on the bass. It’s a shame too, because Her Again’s infusion of punk, doo-wop, surf rock, and twee into pop song structures pairs perfectly with the long summer months. Her Again closed down the live acts of the night after Kevin Krauter, Older Brother, and Wet Mut previously took the stage.

Jess and Emma of Fresh Kill opened the night with another airtight set comprised of graceful harmonies and cleanly sung vocals that bite with a vaguely autobiographical ferocity. As one of the brand new bands on the Bloomington punk scene, the duo has played a string of shows around town this summer and have been hinting at some new recordings in the near future. Sandwiched in the middle of the set were two Nashville-based bands, Sad Baxter and the By Gods. The By Gods (Natalie Pauley, Tye Hammonds and George Pauley) were the first to perform, dishing up some retro garage band entertainment.  Lastly, Alex and Deezy of Sad Baxter delivered an infectiously danceable pop sludge and grunge fueled performance.

Dave Segedy, Peter Doyle, and Nick Harley of Bloomington based trio Sleeping Bag dub their music “nowtro.” That is, Sleeping Bag draws heavily from a combination of 90’s grunge, emo, and indie, but provides twists and turns to propel their sound into the 21st century. Their performance at the Bishop this summer night was saturated with tight instrumentals and a relaxed atmosphere that had been established by the night’s supporting acts, Fresh Kill and Cliffs.

Local rockers the Cowboys are quickly becoming a favorite on the Bloomington show circuit. And for good reason, too. Their trio, which consists of March McWhirter (guitar), Zackery Worcel, (bass/vocals), Jordan Tarantino (drums), and Keith Harman (vocals) is dripping with a casual charisma that is worth the live experience. The Cowboys’ relaxed yet upbeat poppy melodies paired with tight instrumentals has come to define their sound, which was in full effect this summer night at the Blockhouse.

This Fourth of July, I decided to escape the fireworks, parades, and cookouts for a night of punk music at the Backdoor, a local performance venue, dance club, and bar that provides a safe space for members of the LGTBQ+ community and allies. Byrne Bridges was the first act to perform, opening the set with “glam-ish solo pop through a queer/trans/radical perspective.” In what ended up being the most interactive and cathartic act of the night, Byrne Bridges implored the audience to interject with things that they are sorry about during a song that was all about asking for apologies. The Katatonics, a local punk surfabilly band, was the second act to perform. Utilizing some classic surf rock techniques – a heavily defined stand up bass line, lightning fast twists, and constant guitar temolo – one could (almost) forget that Bloomington is about as landlocked as you can get in the US. Elijah Frank (piano, synth, vocals), Davey Watson (guitar), Tristin Holiday (guitar) and Jeremy Johnson (drums) of Franknfuker, a local glamboyant experimental punk outfit, was the final act of the night. Franknfuker, who performed on a stage decked out with skulls covered in glitter and feathers, honed in on an aesthetic that married the visual and sonic components of their performance.

Chicago-based noise rock group No-Men stopped by the Blockhouse to play a late set alongside local rockers, Buttzz.  No-Men is Pursley (drums and vocals), DB (guitar), and Eric (drums). As one would expect of a band that is two-thirds drummers, No-Men was loud and intensely percussive. While sloshy drum grooves, hyperfast fills, and interlocking polyrhythms were certainly set highlights, No-Men is much more than just a one-trick-pony. Pursley delivered an engrossingly gloomy yet energetic vocal and stage performance in between explosive drum instrumentals. Meanwhile, DB and Eric tore into their respective instruments, never missing a beat.

Buttzz finished the night in a celebratory fashion with their signature combination of garage rock and surf punk. Charmingly retro emo vocals, shredding guitars, and speedy drums competed with each other as the audience bopped awkwardly to the music. It was a punk rock hootenanny. The band’s second album release, Summer Luvin, is available for streaming via Bandcamp.