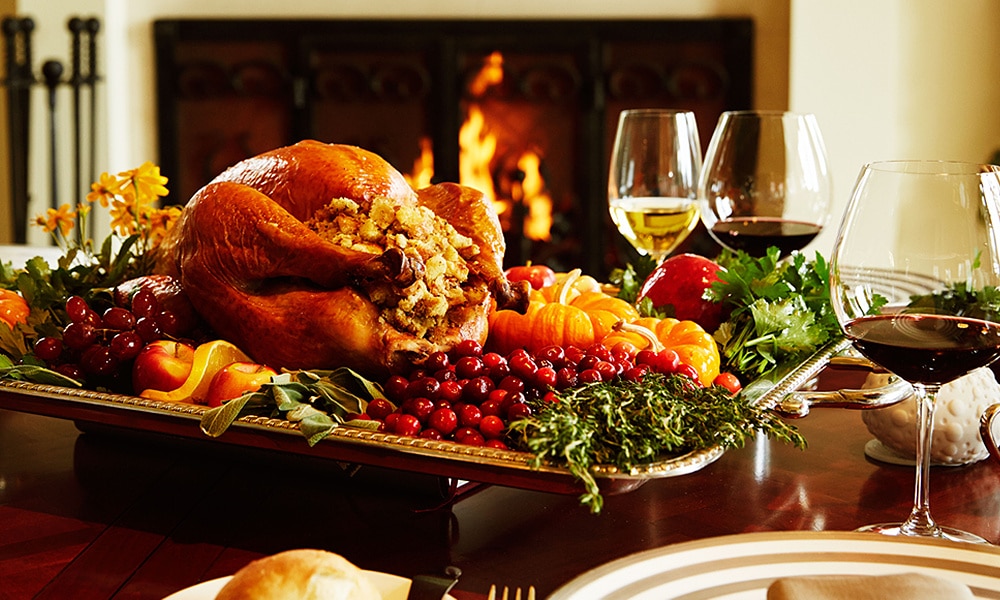 Thanksgiving is a controversial holiday with a wretched color scheme. The Hallmark credo of thankfulness is thin when stretched against this country’s historical relationship with Native Americans. The shirking of materialism is undercut when Black Friday rolls around. To many, Thanksgiving is merely a day to get tanked, watch college football, and shout about politics with Uncle Larry.

Holidays are hard for me. I’m not religious, my family lives 3,000 miles away, and if I did live closer to them, I’d have to decide which half to celebrate with. I don’t like the premise of most holidays either – the fact that we need a nationally ordained day to eat a meal together and be thankful has cynical implications – as if we aren’t thankful for the food we share together the remaining days of the calendar year. As you know, I could easily play the curmudgeon and pick these things apart to forever, but there is one thing Thanksgiving has going for itself that I just can’t knock: the food!

A delicious meal is a delicious meal, and I’m thankful for all of them, but Thanksgiving dinner is a particularly iconic spread of dishes only Americans can understand – like, say, canned cranberry sauce and mini marshmallow encrusted sweet potatoes. The Turkey Day smorgasbord is vast and overwhelming; gluttonous and nap inducing. In fact, it is so immense that I’ve put together a soundtrack to help us waddle through each course.

We don’t call it “Turkey Day” for nothin.’ You don’t have to hang your kids hand-traced paper turkey art on your fridge each year for nothin’ either. The turkey is the main event on Thanksgiving, and whether you’re the one butchering it, cooking it, or simply eating it, the big bird that goes “gobble gobble” is going to affect your life this week. So why not give the poor bird a song? “Stuffy Turkey” by Thelonious Monk is a great place to start – a classy jazz number to score the bird’s arrival, all glazed and brown and stuffed. Follow it up with the frantic “Turkey Chase” by Bob Dylan as you and your family members squabble over precious dark meat morsels. And finally, blast Butthole Surfers’ “Turkey and Dressing,” which will provide the necessary aggression to finish your plate of food, and weather Uncle Larry’s xenophobic rants.

When Peaches sings, “I see you sittin’ and stuffin’ your face/Why don’t you stuff me up?” on 2003’s “Stuff Me Up,” she is clearly personifying the Turkey in your kitchen, begging to be filled with breadcrumb dressing, aka “stuffing.”

What would Thanksgiving be without a vat of butter sodden mashed potatoes? Just another Thursday, that’s what. There are a lot of songs that pay tribute to the “mashed potato,” referring to the wildly popular 1960s dance move. Rufus Thomas’ “Mashed Potatoes,” however, is a tune that rightfully exalts potatoes in their many forms, be they “French fried potatoes” or the titular, macerated kind. For purists, The Ventures’ ode to the side dish, “Mashed Potato Time” has but two lyrics: “Mashed” and “Potatoes.”

It appears that Dee Dee Sharp’s “Gravy (For My Mashed Potatoes)” may be a grotesque sexual innuendo, but at least it’s spot on for Thanksgiving Dinner. Like Sharp, we likely won’t get through the evening without shouting, “C’mon baby/I want some gravy!”

Rock n’ roll has been good to gravy, as there are countless songs that reference the rightful sidekick to turkey and mashed potatoes. Gravy grooves range from the instructional (Paul Kelly’s “How To Make Gravy”), traditional (George Benson’s “Giblet Gravy”), and of course, the addictive (“Nicotine & Gravy” by Beck).

There is an unjust deficit of green bean songs on the Internet, and even fewer that mention the congealed, Turkey Day staple we refer to as Green Bean Casserole. What I have found in the musical spirit of hericots verts has been pretty dismal. Especially “Green Beans,” a warbled electro cut that slanders its namesake ingredient by repeating, “I don’t like green beans” through a vocoder too many times. The most practical application of this song would be as a punishment for children who don’t eat their vegetables. Weary parents of picky eaters should make them listen to it fifty times in a row.

If you thought there weren’t enough songs about green beans, then you’ll be horrified by the dearth of cranberry sauce ditties. Such a peculiar condiment deserves to be memorialized in song. Alas, the closest we can get to an aural rendering of that red, gelatinous cylinder is ‘90s Irish alt-group The Cranberries. Their catalogue may be pretty food-reference-free, but songs like “Ode To My Family” and “No Need To Argue” fit perfectly with the relatives-around-the-table theme of Turkey Day. And who could forget “Linger” – the band’s biggest hit, which could very well reference the relentless food coma that looms post-feast.

Last, but certainly not least in our festive meal is dessert. Though different tribes may take their coffee with a variety of sweets, pumpkin pie is the poster pudding for Thanksgiving. It is also (much like mashed potatoes, gravy, and sweet potatoes before) a euphemism for genitalia. Look no further than The California Honeydrops’ ditty “Pumpkin Pie” (off of the subtly titled Spreadin’ Honey LP), which begs in a brazenly possessive manner, “Won’t you save all your pumpkin pie just for me, girl?” A similar winking nastiness can be found in Bob Dylan’s 1969 number “Country Pie,” which nods to pies of pumpkin, and many other flavors. Let’s just pretend these songs really are about pie for one night, what do ya say? Your family will thank you for it.