ONLY NOISE explores music fandom with poignant personal essays that examine the ways we’re shaped by our chosen soundtrack. This week, Jason Scott embraces their genderqueer identity with a little help from pop icon Britney Spears. 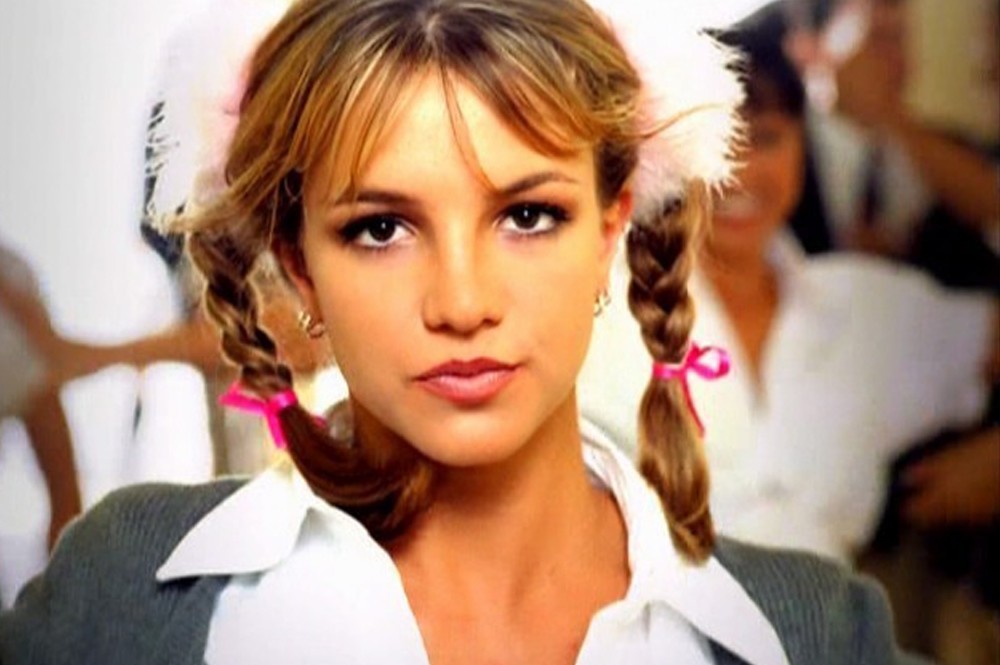 Britney Spears’ …Baby One More Time turned 20 years old in January (talk about a punch in the gut to remind you exactly how old you are). But I remember the first time I held that shiny pink compact disc in my hands like it was yesterday. I was a squeaky, pimple-riddled 13-year-old coming of age right at the turn of the century. I was standing on my best friend’s front porch, the sun glistening at the edges of the record, and I kept turning it over and over in my fingers. Her eyes pierced right into my soul, and her dazzling white smile struck me as that of someone just coming into her own as a strong, fiercely independent and confident young woman. She was me. I was her. It was one of those transformational moments with music that changed the entire course of my life.

A teen growing up in rural West Virginia, nestled among shimmering Appalachian hills and rows of steeple-topped churches, I felt suffocated by tradition and a deep-rooted helplessness to understand who I was. Gender hadn’t yet been broken down. The world still operated predominantly within gender normativity then – but such queer icons as Elton John, Freddie Mercury, Melissa Etheridge, George Michael and Tim Curry in a transcendent binary-busting performance in Rocky Horror Picture Show certainly moved the needle in the right direction. Then, there was Will & Grace, a smartly-written primetime comedy that spotlighted queer characters in a way that had never been done before. Will, Grace, Jack and Karen immediately became beacons for the changing face of America and pop culture; their hilarious antics propelled the conversation forward and truly shifted how the world saw queer folk. The stigma around AIDS was lessening and the dawning of a new millennium stoked the flames of a social revolution.

Meanwhile, I still didn’t quite feel like I was seeing my true self up on the screen or stage. The blackness in my heart was all-consuming, and I would carry this around with me for 18 more years. Sometimes, it’s hard to put it into words, exactly, but when I look back on my first experiences with Britney Spears, the emotional gravity of her impact on my youth comes into clearer and more profound focus.

I had already hit puberty by the time I heard my first Britney song. With its slurpy-thick beat and Britney’s playfully-coy vocal lines, “…Baby One More Time” still to this day evokes a sense of power and sexual command that I’ve never managed to find anywhere else. At the time, I often masqueraded around in high heels and smeared on lipstick – there is a photo floating around on the internet of my sister and I caked in a cool, vibrant-red hue, and we’re holding a sign that says “Don’t hate us because we’re beautiful” – or pretended to be Kelly Kapowski from Saved by the Bell or T-Boz from TLC. Truth be told, many a fight broke out between my girlfriends and me on who’d play those parts. I was unapologetic even then.

That first record also hit hard with other glitter-pop bangers like the disco-inflected “Deep in My Heart,” “(You Drive Me) Crazy” (featured prominently in one of my favorite Sabrina the Teenage Witch episodes, complete with a Melissa Joan Hart cameo in the song’s neon-splashed video) and the criminally-overlooked, late-night fizzer “Soda Pop.”

Elsewhere, the Queen of Pop tore down the facade and really plucked the heartstrings. Hits like “Sometimes,” which gives me goosebumps every time I let it wash over me, and “Born to Make You Happy,” another absolute stunner, flexed the full extent of her potential. The chewy “Thinkin’ About You” and the piano-based ballad “E-Mail My Heart” made me want to grow up, fall in love, get my heart broken and then cry on my bathroom floor with a bottle of rosé. “When you need someone, you just turn around / And I will be there,” she crows on “I Will Be There.” And oh my stars, does that lyric hit me even harder today than it did two decades ago.

Her music made and still makes me feel alright in my own skin.

Later that summer, Britney made her debut on the MTV Video Music Awards with a sizzling performance of “…Baby One More Time.” She had to share the stage with that year’s other hit newcomers, a group of men called *NSYNC, but the school room setting gave her the proper arena to prove to the world that she was worth it. That two and a half-minute explosion cemented what I had already known: a superstar had been born and pop music was never going to be the same.

I would never be the same either. In fact, summer ‘99 was the turning point I’d never forget. I knew I was attracted to guys. I mean, gym class always made me hyper-aware of my surroundings and totally uncomfortable. I always waited for everyone else to change before slinking to the furthest corner. I never told anyone how I was feeling, but I assumed all other queer boys felt the same: teetering on the edge of masculinity and femininity. Socially, terms like “non-binary” or “genderqueer” were far outside of our understanding of identity markers, so I felt even more alone and isolated from the world and myself. I looked to Britney to satiate some need that I couldn’t quite figure out on my own, and her ability to command the attention of the entire world was inspiring and gave me hope that someday I might be that confident, too.

I’m not sure when it started, but my feminine energy began to inhabit most of my being. I started to dream, imagine, think, and act as a girl, and so, I gave her a name: Britney. Britney Spears, the pop icon, almost became ingrained within my bones. Her magnetism, her charm, her style, her prowess, her humor, her personality, all soaked into who I was becoming. She fueled me to think beyond an ordinary life, because I knew I was special. I was extraordinary, coated in a thick layer of sass. And it was as if the singer was the only one in the entire world who could understand the Britney I held within.

In the coming years, I followed Britney’s career as any loyal, avid pop fan would and should. Each step of the way, I grew as she did, and sometimes, dipped to her deafening lows as she did. When the media made fun of her mental health in 2007, my heart was both broken and empowered by her, seeing her somehow endure such disgusting ridicule. It was still years before the idea of non-binary identity broke into the conversation about gender, so I came out as a gay man  one year prior and had my first sexual encounters. But even that huge step in naming what I felt inside didn’t quite go far enough; I was still troubled by something far deeper. Along the way, though, Britney was my haven, and I watched the starlet climb out of unimaginable darkness to release more albums, including 2011’s Femme Fatale and most recently, 2016’s absolutely astounding Glory, both among her greatest artistic feats.

It was actress and producer Natalie Morales (of Parks & Recreation fame), not Brtiney Spears, who finally completed the puzzle for me – she wrote a powerful essay on her own journey with gender, and that’s when I knew once and for all who I was. I came out as non-binary (or genderqueer) in the summer of 2017.

It’s certainly been a long, winding road, as they say, and I am eternally grateful for Morales’ fearlessness to proclaim her truth from the mountaintops. But it was and forever will be Britney Spears who first unlocked that mysterious door for me so many years ago. Her humanity, her truth, her daring and her music have and will always be there in the darkest of hours.

My Britney has certainly morphed and blossomed in various forms through the years, often mirroring personal breakthroughs and turmoil that could have swallowed me alive. I sometimes wonder how my life would have turned out had we not been blessed with Britney Jean, one of the most prolific pop creators of our time. I don’t think I ever would have been sent down this path on which I now stand.

Britney, if you’re reading this, from the bottom of my broken heart, thank you.