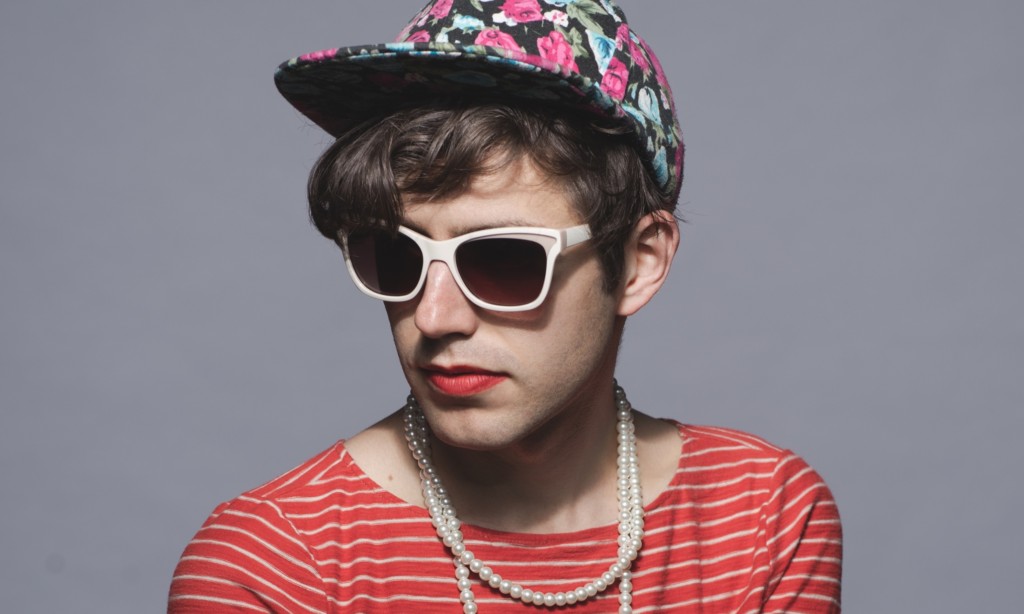 It takes a lot of balls to wear a dress. Shit, I have a hard time with it, and I lack the pesky external organ complicating the endeavor to begin with. However, Ezra Furman’s ballsiness goes far beyond his ability to look excellent in a miniskirt. And he does look excellent.

The Chicago native has been on the music circuit for over eight years now, but has just begun to make international waves since the release of his 2015 LP Perpetual Motion People last spring. PMP was Furman’s inaugural release on the acclaimed Bella Union label, and its positive reception has had him touring extensively, including a few dates we covered in New York and a set at Glastonbury earlier this summer.

Backed by his band, the Boy-Friends, Furman’s sound is unlike anything else on the current scene. It is rock n’ roll at the end of the day, but a translation incorporating a love of everything from doo-wop to Lou Reed to the Replacements. The strength of Furman’s frenetic, wavering rasp and saxophonist Tim Sandusky’s screeching melodies truly distinguish their sound from contemporaries.

Recently, Furman has released a lone single off of his upcoming EP Big Fugitive Life, which will be out August 19 on Bella Union. “Teddy I’m Ready,” the EP’s first track is an absolute anthem, pairing thundering drums with delicate guitar builds, cooing harmonies, and of course, the requisite sax licks. It is a ballad that suggests Furman has stadium potential.

The EP itself is actually a collection of “orphaned songs,” as Furman put it in a press release. He continues to explain the relevance of this particular selection of work:

“They are focused on the theme of the mind unmoored–those of us who have been left to drift unsupervised through the modern world. Four of these tracks were originally intended for inclusion on ‘Perpetual Motion People’. Two of them were for ‘The Year of No Returning’. But they weren’t ready until now.

The first three songs are our vision of rock and roll. A madness that overtakes your mind and body. It’s wanting to go somewhere you’ve never been, knowing you’re on your way. The second side is acoustic guitar as open wound, a troubled mind on display. Emotional in a different way, tender like a bruise. It includes “The Refugee,” my first song entirely concerned with my Jewish background and present, a song dedicated to my grandfather who fled the Nazis as well as to all of the refugees desperate for a home today.

We dedicate this record to refugees of all kinds, all over the world. May all the wanderers find the homes they seek, and and may those with power welcome them as fellow citizens of humanity.”

It may have been while reading these words, in simply reading a press release, that something finally clicked for me regarding Furman: this is an artist who actually gives a shit. Pop culturally speaking, we’ve long been on hiatus from making political statements. Irony has pervaded, the urge to be nonchalant and, god help me for saying it, chill has been rife, and it’s still pretty rare for an independent artist to speak in earnest about the sort of topics Furman tackles. A few of those being, but not limited to:

In a beautiful piece that Furman wrote for The Guardian last year, the artist explains the struggle he’s faced understanding his own sexual orientation and gender identity. He credits musicians like Bowie, Lou Reed, Antony Hegarty, and Grace Jones (to name a few) for helping him accept his own ambiguity. He elaborates on his current state of pleasant uncertainty:

“The full list of musicians who don’t conform to traditional gender roles, of course, would be nearly endless, and more and more appear every year, whether by debuting their work or coming out as trans or gender fluid.

Over the past few years, I’ve added myself to this list, performing more and more often in clothing, makeup and jewellery traditionally intended for women and girls. I’d like to set the record straight (so to speak): this behaviour is not just part of an onstage persona, nor is it a gimmick to get people’s attention. Gender fluidity is very much a part of my life offstage, though I am still exploring what it means. I’ve not quite decided on a gender identity, I may never decide, and that’s all right with me. I am proud to exist in an ambiguous, undecided state.”

Furman has been equally open about his struggles with mental health and depression since the inception of his career. Perpetual Motion People comes with a lengthy letter from Furman, admitting a very dire time he faced after graduating college. He goes into detail about a period of time when he wanted to kill himself, and then leads the reader out of that darkness into his recovery, sharing a long poem called “FOAM FACTORY” directly after. It seems as though whatever difficulty Furman has grappled with in the past, he wants to share it, and he wants to be a device in the healing of others afflicted with similar issues. And that’s no small thing.

Before he signed with Bella Union, Furman was still churning out an admirable amount of material, some of it highlighting admirable topics. Shortly after the shooting of Michael Brown in 2014, Furman released the song “Ferguson’s Burning” to exhibit his solidarity with the Brown family, which goes thus:

It isn’t too often that you come across an artist like Furman. He is swiftly becoming much more than a musician – he is becoming a movement – a fully rigged artistic piece complete with a mission statement. A truly unique songwriter, performer, and character, one of the best things Furman leaves one with is a sense of confusion.

When I think of Ezra Furman, my music critic reflexes always ask: “Who can I lump him in with? What trend did he sprout from?” But there is no answer. He is not the last cry of the folk-revival scene, or the latest electro-pop outfit, or another fucking “dream pop” act. He is, undeniably, Ezra Furman. And he’s not going anywhere.