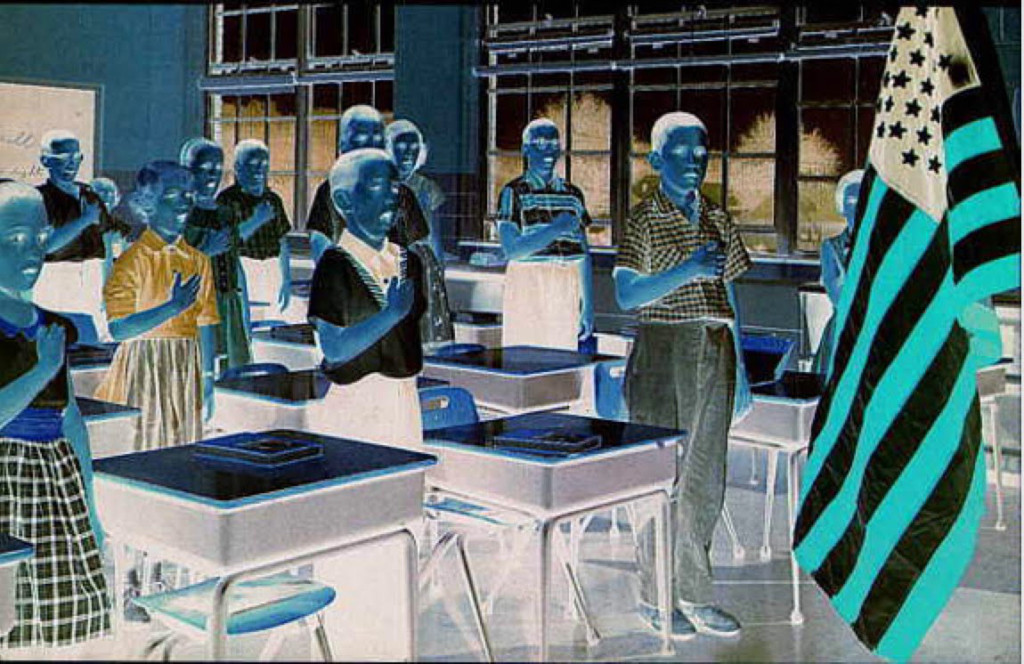 You remember it. You know you do. Every morning, at 9am sharp. Standing. Hat off. Left arm, stiff at your side. Right hand resting on heart – reluctantly. All together now:

“I pledge allegiance to the Flag of the United States of America, and to the Republic for which it stands, one Nation under God, indivisible, with liberty and justice for all.”

There came a time in my elementary school life, when this routine incantation became unbearable to perform. Naturally, this sudden sourness coincided with the election of George W. Bush, and his subsequent invasions and monstrosities. As we approach our first President’s Day under Donald Trump, I imagine school kids everywhere are experiencing a similar sourness during the assemblies leading up to the national holiday, the songs and pageantries one has to perform in public school, K-12.

During these morning customs, I mainly recall feeling so disillusioned with what felt like a national disease; I couldn’t bring myself to touch my heart and recite the Pledge – let alone stand up. The religious overtones of the poem always made me uncomfortable anyway, so I remained seated instead, fixing my gaze on the floor.

This did not go over well.

I lived in a small Republican lumber town – a town of many Carhart jumpsuits, many pickup trucks and several conservative teachers. What were the latter to do with their blue-haired, straight-A student who, by pleading the First Amendment, wasn’t actually breaking any rules? I relished in their visible frustration when they were unable punish me. They couldn’t even win outside of the classroom, as they knew calling my parents would amount to jack shit.

I was lucky enough to have parents who intrinsically distrusted institutional authority – or any authority for that matter. These were parents who routinely arranged “hookie” days to take me to the zoo, or on a ferry ride, or any of the multitudinous activities more educational and interesting than grade school. My political idealism was the least of their concerns; my dad admired it, and my mom was just happy I wasn’t injecting drugs. It was a win-win situation.

Years on, I can sift through all of the mornings, all of the assemblies and pep rallies I sat through, firmly planted on bleachers during the Pledge, the National Anthem, and that cruel excuse for a song, “God Bless The USA” by Lee Greenwood. Perhaps you were of the lucky lot whose school did not require its students to stand and, hand on heart, sing the putrid, nationalistic, country-crossover, garbage heap of a “song” that is “God Bless the USA.” I suspect that everyone in my graduating year could deliver its lyrics with rapid snaps of deeply ingrained memory at its opening chords.

Ok, this is already getting problematic for a crowd of school children to be singing.

“I’d thank my lucky stars/To be living here today/Cause the flag still stands for freedom/And they can’t take that away.”

Who the fuck are they? This song was written in 1992. Somehow within seconds Lee Greenwood had married off and impregnated an entire gymnasium full of children, and put the paranoid words “they can’t take that away” into our tiny mouths. That’s creepy. It was a song that sounded born of wartime – where any one of us could be shipped off to the battlefield to fight “them,” and we would never see our Beanie Babies again. Looking back, it was absurd to make a school full of elementary students sing this. A rhyme reciting the Constitution or the Bill of Rights might have proven more useful.

What strikes me most when revisiting these memories isn’t the immense satisfaction I felt while refusing to stand, or the disgust with singing Lee Greenwood’s song…especially that chorus:

“I’m proud to be an American/Where at least I know I’m free/And I won’t forget the men who died/Who gave that right to me/And I gladly stand up/Next to you and defend her still today/Cause there ain’t no doubt I love this land/God bless the USA.”

What really bugs me is that despite my efforts to resist, despite my repulsion with these mandatory rituals, these songs and pledges and poems have been effectively lodged into my psyche forever. I will never be able to reclaim the chunk of brain tissue “God Bless the USA” has set up camp on forever. This is the beauty and the beast of music, however; the bad can be just as memorable as the good… like sex.

But what if, in light of our current President, we could sing different songs at our assemblies? There are dozens of songs that have been written about Presidents over the years, and while Mr. Greenwood was one of the chosen musical failures to play Trump’s inauguration, doesn’t a President in 2017 deserve an update? Here are a handful of President-related songs one could modify for public school assemblies nationwide. Or, if you homeschool or pay for private school, use the originals! You’re kids are going to learn the word “fuck” no matter what. I promise.

There’s nothing I love more than a catchy pop song with cruel lyrics. Lily Allen wrote this for George W. Bush (as she confirmed at a concert in Brazil in 2009), but it works remarkably well as an anti-Trump number.

“Look inside/Look inside your tiny mind,” chimes Allen. “Now look a bit harder/Cause we’re so uninspired/So sick and tired of all the hatred you harbor.”

Grade school modification: Change “fuck you” to “fudge you.”

Also written in the Bush/Cheney era, “2+2=5” nods at George Orwell’s 1984 – which is currently enjoying an upswing in sales as the public turns to it again for answers. The equation is brilliant for its simple and effective message, which connotes the intentional peddling of misinformation. The song also includes Radiohead’s album title of that year (2003) Hail To The Thief – a spoof on the traditional, President-praising anthem, “Hail To The Chief.” You couldn’t ask for a better President’s Day song this year!

Grade school modification: make sure the children do not walk away thinking that 2+2 actually =5.

Kids love rap, so this will be an easy assembly sell. With a few modifications, you can Martha Stewart this shit up and have a catchy fight song for your little resisters.

Grade school modification: change “fuck” to “funk,” don’t say the “N” word. Ever. Keep that “grandma” bit in. Someone is getting extra dessert for that.

Bright Eyes, “When The President Talks To God”

This one’s great for kids. They will learn about xenophobia, the prison industrial complex, and consonants. There is a line about “dirty coke” but you can just pretend it is the cola variety. This song may have also been written about G. W. Bush, but as you can hear, it is still relevant – unfortunately.

The Honey Drippers, “Impeach The President”

Simple, funky, and more relevant than ever. This will be a fan favorite. Kids will learn all about the impeachment process and the transformative power of funk. Pretty much the only words are “impeach the president,” which can be easily integrated into preschool programs as well.