I Googled how long it takes for milk to go sour, and unless Becca Ryskalczyk can chug a gallon in 2 hours and 45 minutes, I shouldn’t bring it as a gift. Granted, almost accidentally killing a musician would be such a throwback to when I started Morning After, and I do love things coming full circle. But the milk is supposed to be a gesture of good will, to replace the (benignly expired) bottle drained on New Years Eve for makeshift White Russians.

Becca is the leading lady of Bethlehem Steel. Her gift, heard best on Party Naked Forever, is in utilizing a light and sweet voice for a kaleidoscope of emotions. “Deep Back” breaks my heart, “Untitled Entitlement” pretty much captured the current national mood of seething anger and disgust (and the line “sometimes I can’t tell if I’m real anymore” gutted me on a personal level). And yet there’s no fear in raging, either; Bethlehem Steel’s landscape of sound is both fuzzy and ferocious, delicate and dangerous, as all good things should be.

Truth be told, tho, Becca stuck in my mind as a good subject for this column after an encounter at a party in October (she came highly recommended by Jordyn Blakely). And because, in a weird twist of fate, it was in her apartment that I ended 2017. And what was 2017 but the year of a kaleidoscope emotions?

So once again, I find myself braving the (milkless) Brooklyn tundra at the dawn of a new year. 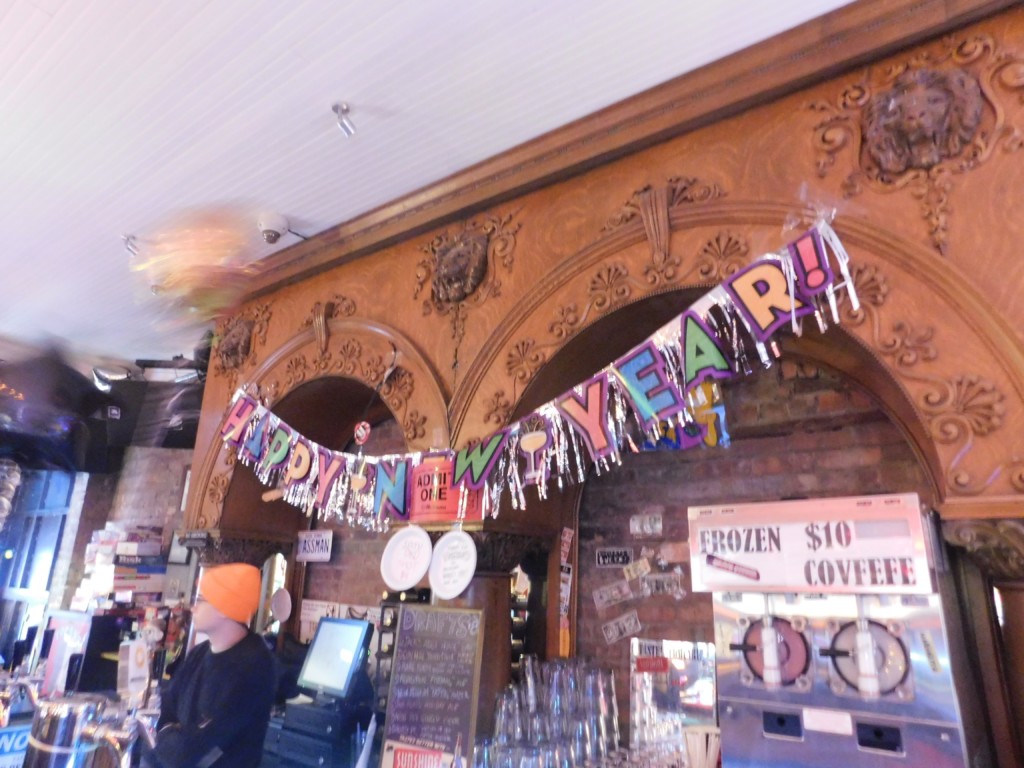 THE SCENE: Becca shows up to Sunshine Laundromat wearing pants-on-pants, a pink Northface (her first, despite misgivings from her SUNY Fredonia days), and excuses herself to glitter-up with one of those Fenty Stix. I’ve never been here, but the flickering pinball-arcade-slash-bar-slash-literal laundromat is her favorite spot.

I grab some sort of holiday ale (I don’t want the holidays to end) in the meantime. It’s, tbh, super late in the afternoon but these days my mornings have started later and later. Plus I brought a scone from Starbucks, so as far as I’m concerned this is a canon breakfast.

When Becca gets back I learn that she’s big, big, big on pinball – it gives her some respite. A while ago she quit smoking, which gave her an out from social interactions that went on too long. “And now I just find the pinball machine in the bar,” she explains later.

I try to be a gentleman and ask what machine is her favorite (Jurassic Park is good; The Big Lebowski is like her White Whale because it’s always out of order). But then, I see it.

“OH THERE’S THE ADDAMS FAMILY PINBALL MACHINE,” I scream. “Can we do that?” 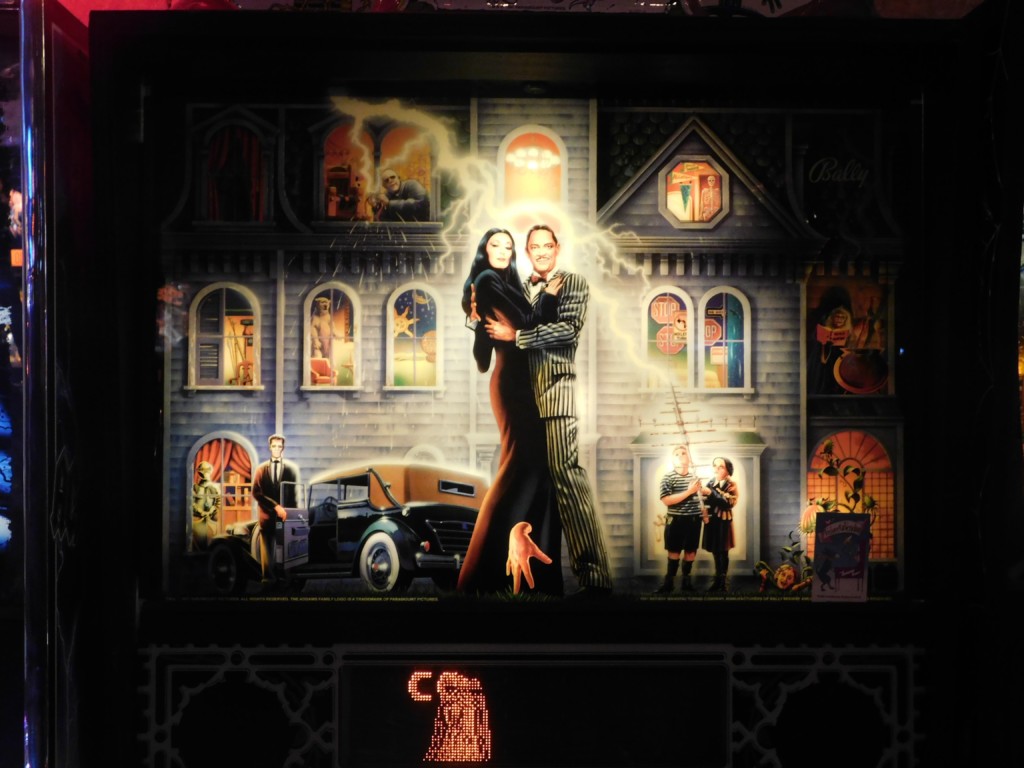 4:33 I suck at the Addams Family so we try our luck with Elvira next door and I ask about New Years Day. “How was clean-up the next day?”

She smiles.”I don’t know – I was working. I got home and my apartment was clean. It was magical.”

“So magical! I only got to see two rooms but I liked the entire wall that had streamers.”

My face drops. “What happened?”

“It was smelling really weird, and then it dyed our wall blue.”

“Was it like, dollar store streamers?” I ask, as if 75% of my apartment isn’t a collection of Dollar Tree finds.

“It was. It was definitely smelling like a dollar store and making me feel sick and sneeze a lot.” That’s fair; sometimes beautiful things can be toxic and wall-damaging.

We suck a little bit less at Elvira, and that’s a huge comfort. 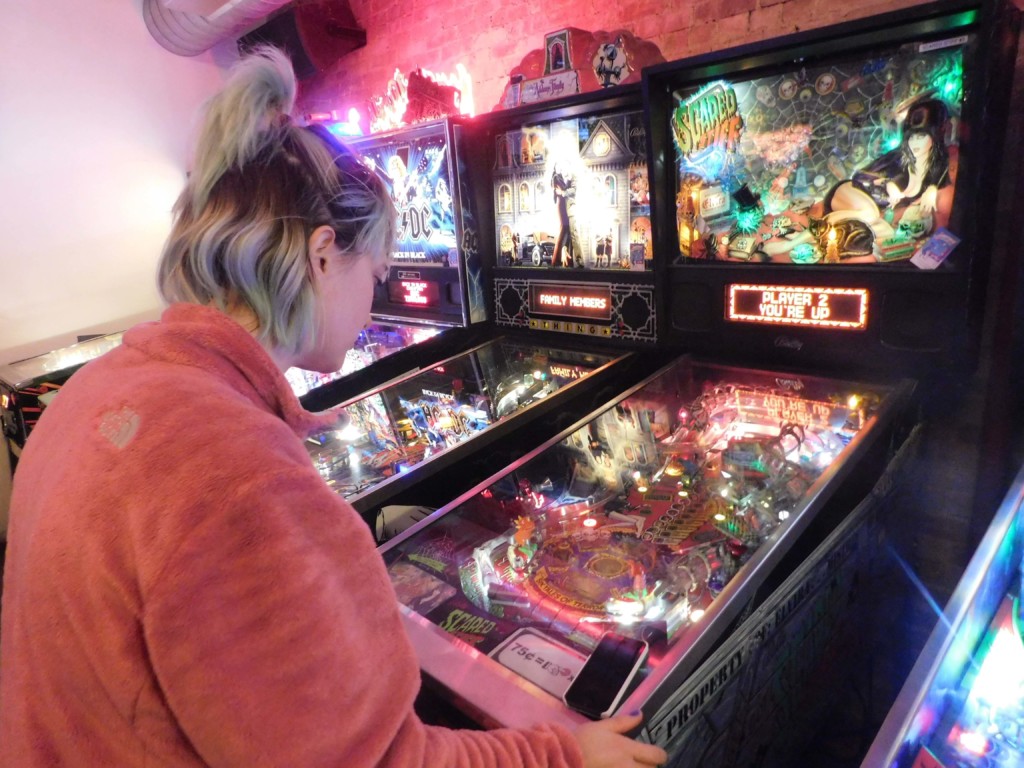 5:08 Meanwhile, at the Jurassic Park machine we talk about resolutions and maybe Jeff Goldblum a bit (“So hot.” “SO HOT.”)

She mulls over her wish for 2018 as a plastic raptor pops its head up for a charming shriek. “I want to be…less anxious.”

“Do you have a plan of attack with that? Because I haven’t found one for my anxiety yet.”

Becca’s idea is more about streamlining her responsibilities, rather than spreading herself too thin. “Maybe I just should be doing less,” she ponders. “Just not taking on a lot of unnecessary things, like ‘I need to plan three things all at the same time.’ And then it’s just TOO much. Or ‘I need to be social’ but really I just want to eat stew and watch The Office.”

Word. “That sounds like a perfect life plan and anyone who loved you would not keep you from doing that.”

The secondary goal is to get more into make-up, and she’s currently obsessing over Rihanna’s line.

“It’s the galaxy palette, look at that shit,” Becca says, gleefully pulling up the sparkling polychrome on her phone.

I do my best raptor impression in response. “That’s fucking gorgeous.”

“I know.” She goes back to the Goldblum-sanctioned game.

“Wait, which color do you want the most? Gun to your head? If you could only have one.”

“The blue,” she says decisively, and I look back at the pallette.

“The dark or the light?”

“Fuck, the light,” she says, almost panicked as she taps on the side buttons. “The light right now.”

I look through Rihanna’s collection through the spiderweb of Becca’s iPhone screen, feeling highly uncertain I could ever pull off a seaweed-colored mouth.

“You can wear green lipstick if you want,” Becca says encouragingly. Apparently getting into cosmetics is sort of a new-old thing; she was all about covering her face in her teen years, and then entered a make-up sabbatical. She had this epiphany where she thought, “Why the fuck do I need to wear this?” But once the “need” was taken out of the question she was firmly in the camp of “This is so much fun!”

“Before I would wear it because I was really self-conscious. Like I’d wear concealer and eyeliner and I couldn’t leave the house without my nails painted,” she explains. “And something flipped. So now that that’s behind me and I want to go all the fuck out there for ME. There isn’t any anxiety of, ‘Oh I can’t let anybody see me without eyeliner on.'”

And that’s the right reason to wear make-up. It’s what Rihanna would want.

5:46 At this point I’m onto another Holiday Ale and Becca’s getting reflective over her Miller High Life. It’s a tough subject: the loss of Shea Stadium. I know, I know, we’re all still fucked up about it. But she grew with it as a sound intern, then worked there, and even practiced in the venue.

“It was really special. I left for a year to go to Vermont to build this camper house and then with the last days I was on tour. I missed… everything. But I was building this fucking house to live outside of Shea.” She laughs half-heartedly. “It’s so crazy, it’s so sad.” 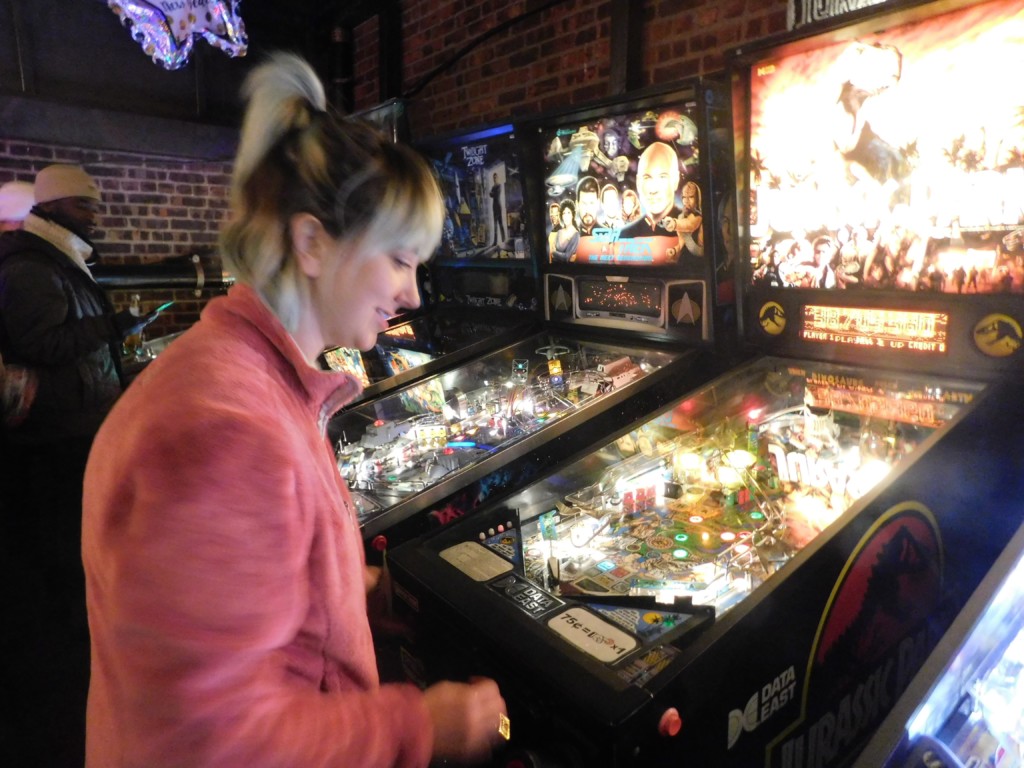 Her own emotional kaleidoscope shifted from being upset to getting angry. “I went into Henry Rollins mode and was like ‘Everyone in fucking Williamsburg can all get fucked, fuck this, fuck that guy, let’s destroy the world.'” (Split second pause.) “In a positive, ‘Keep DIY alive sort of way.'” She’s still great at capturing the collective mood, though.

“I think I definitely just kind of repressed a lot of Shea things because I left,” she says. “I had my nights while I was on tour… like I was playing shows and going to National Parks. And one night I found myself in a field of wild sage -”

“Where did you find a field of wild sage?” I ask, incredulous, almost dropping my ale. “Where did you go where that was a thing?”

She pages through her memory. “Arizona…? It was some government public land spot. And I just remembered taking a ton of it. I was making these cartinis which were just warm gin and warm olives.”

“I love gin but I don’t know how I feel about that.”

“I made like a huge one in my plastic cup. And I picked up all this sage and was throwing it into a fire. And that was the last night of Shea and I couldn’t be there,” she concludes.

There’s something charming about the off-beat ritual. We all say good bye to things in different ways.

Speaking of which, fuck, I need to say goodbye. I eat my cranberry scone on my trip home, the sky pitch black above me. When I get home my NYE dress is still brightly ultraviolet on my floor, the brocade remnant of 2017: the year of a kaleidoscope emotions.

Wanna know a non-secret? I’m a big, big advocate for expressing those blue and red toned feelings, turning it into art, or having it fuel a story. But I also love being able to be naked with someone, emotionally naked, not just in a boned-all-night-to-Belle-and-Sebastian kind of way. This scene, at its most earnest, bonds people together into this drunken web of catharsis. And among all the loss and chaos, that was the bittersweet revelation of at the end of 2017.

Not everything that ends has to go sour, because you can always take that leftover pain and turn it into something wonderful to share with someone. You can throw out those beautiful, lethal streamers and finally feel like you can breathe. You can pick up a make-up brush again for the right reasons and not the wrong ones.

Not every ending is an ending. Sometimes it’s an evolution.