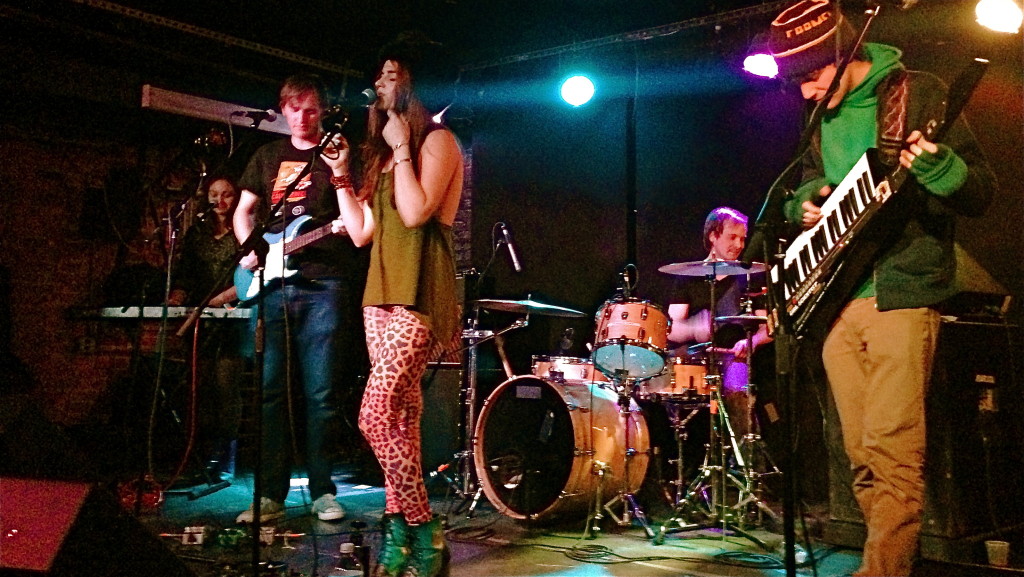 Perhaps some of our older readers will remember the NES/arcade game classic Paperboy, in which you, as a blob of bike-riding pixels, are tasked with throwing papers at houses painted a certain color (denoting their subscription status) while avoiding rabid dog-shaped pixels and mini-tornados and dudes exercising in the middle of the sidewalk.  If you manage to do this and successfully deliver newspapers to all the white houses, the red-painted non-subscribing houses change color and you have more subscribers in the next level.  There’s almost nothing simple about this game; it has frustrated generations.  That little ol’ lady waving her shoe came out of nowhere.

Teen Girl Scientist Monthly isn’t an actual print magazine, it’s a Bed-Stuy based six-piece that plays invigorating rock songs.  They are the Paperboy of Brooklyn bands – hardworking, perfect aim, and maybe a little vandalism.  They’ve built a tremendous fan base in the few short years they’ve been performing, in part because their songs are so vibrant and catchy its impossible not to tap a toe to them, and also because their live shows are more like spending time in an arcade than reading a stuffy research journal.  The band released their excellent debut album Modern Dances last year after a successful indiegogo campaign.  Many of their hilariously-described perks included songs written specifically for their supporters – enough that funding the first record made recording a 10-track follow-up a necessity.

And so we have We Run With Gangs, TeenGirlSciMo’s exuberant victory lap/thank you note.  At the release party at Mercury Lounge last Monday, the band’s devout fans shimmied to the new songs as though a high score depended on it.  Vocalists Morgan Lynch and Matt Berger bopped around the stage, humbly dedicating the set to everyone who had ever supported the band whenever they were able to catch a breath.  Pete Scalzitti wielded the most serious key-tar I’ve ever seen on stage, while Daniel Muhlenberg pummeled his kit and Matt Gliva thumped out elastic basslines.  Melissa Lusk’s bright keyboards and vocal harmonies were also a nice treat, as was her turn as lead vocalist on We Run With Gangs standout “These Days” (no, it’s not a Nico cover).

Fans of Teen Girl Scientist Monthly subscribe (see what I did there?) to a simple formula (the puns come so easy!): F + U + N.  They have a great sense of humor, a winning catalogue, and energy to spare.  Their relatively frequent live shows are highly recommended, and in the meantime, We Run With Gangs is available for free via TGSM’s bandcamp – you don’t even have to paint your house a different color to jump on the bandwagon.