Skip to content
A couple things I recall from Santos Party House include Maker’s Mark and Jack Daniels being the same price (win!), two floors of pure musical craziness, and the fact that the place is known for filling up in .5 seconds for live performances. The venue lives up to its name; by the end of the night, I had fallen into a limbo of insanity. They book amazing musicians, some of which I have had the privilege of enjoying. The lineup April 2nd included three mesmerizing acts on the ballot for the Three of Clubs Tour: Flagship, Terraplane Sun, and Little Daylight.
I have been following Flagship since their debut EP, blackbush was released almost two years ago, “Still I Wait” being one of my favorite tracks of the year. That certainly didn’t ease the star struck syndrome I felt meeting Drake Margolnick afterwards. He’s drawn comparisons to Chris Martin, but he and his four bandmates create an aura all their own. Margolnick, Matt Padgett, Christopher Comfort, Grant Harding and Michael Finster hail from Charlotte, NC. Their fantastic ensemble of dream-like sounds and melodies are the perfect backdrop for Margolnick’s smooth vocalizing tranquility. Accompanied by what was more or less a light show, their set hardly felt like an opening act. I found myself completely in awe as I gazed upon Flagship, so much that I made friends with a girl from Spain who was similarly entranced. Imagine that – two admirers from across oceans, brought together in something magical, and you get a sense of the gravity of Flagship’s performance. It’s a ripe moment for the band, following their fall released self-titled album, via of Bright Antenna Records. They’re still fresh, maybe discovering their personality on the road. But their performance last Wednesday really showed that there’s nothing but a glistening future ahead. It happened to be Finster’s birthday, but it felt more like mine to have “Are You Calling” sung to me. That’s the best thing about the band’s live performance; every song felt intimate and personal, like it was written exclusively for that one moment only. 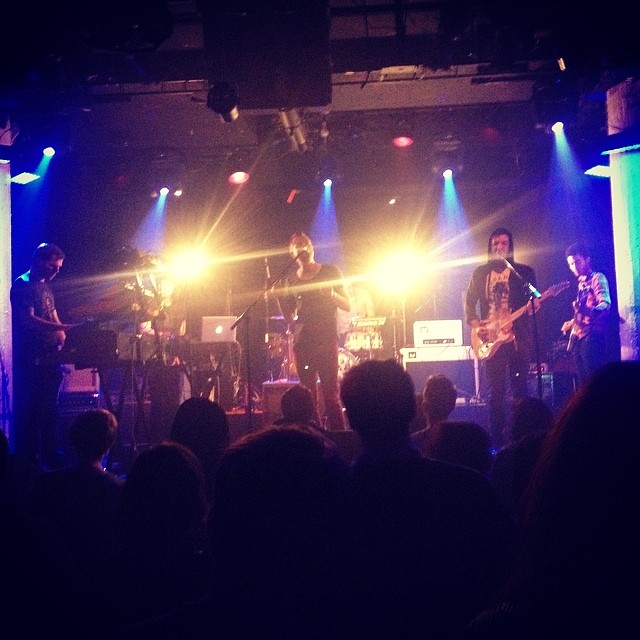 Terraplane Sun is from Venice Beach, California and made a solid segue from Flagship to headliners Little Daylight, mixing up their jouyous, dancey pop with some doses of indie-infused folk. Charismatic frontman Ben Rothbard had the crowd clapping and singing hits from last summer’s Ya Never Know EP, but the real focus was on material from their latest album Generation Blues, slated for release in July. Rothbard, Chris “Cecil” Campanaro, Lyle Riddle, Johnny Zambetti, and Gabe Feenberg are dazzling multi-intrumentalists, Johnny exchanging his guitar for mandolin and Ben picking up bluesy tambourine and harmonica every now and then. “The Stone” was particularly energetic, which makes sense considering this is the band’s first single from their upcoming record.

To send us all home especially sweaty and was Little Daylight. I love a girl that can rock out and do it in a gold dress and high-top sneakers. Indie-electronic-pop trio Nikki Taylor, Matt Lewkowicz and Eric Zeiler were the reason the guy next to me started puking. They are infectious but not in a sickening way, it’s just that everyone was jumping up and down to every song – especially (and perhaps ironically) to “Overdose.” Maybe he had Tunnel Vision – that would make sense, as it’s the title of the band’s electrifying debut EP. Whatever the cause, Mr. Barfy couldn’t kill the feel-good vibe gripping Santos. Little Daylight will end their tour at Firefly Music Festival, and the rest of the Three Of Clubs tour will continue with the dates posted below. Nikki Taylor was so intense and wild, I danced like I was single. I guess Santos just really knows how to party. 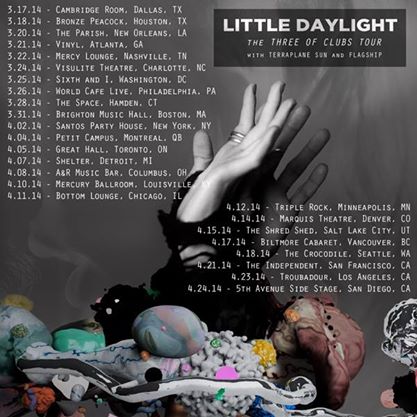