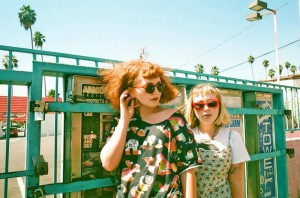 In the days of self-inflicted constant surveillance we all bring out cameras to shows, but it’s rarer for artists to return the favor, capturing their intimate moments of tour to give us when they’ve already poured all their essence into a performance. When music documentaries are done, at worst they’re overly promotional and obviously fake, at best they’re tender, inspiring, and revealing.

From Philadelphia by way of LA, Girlpool consists of Cleo Tucker (Guitar) and Harmony Tividad (Bass). They’ve become known for their stripped down minimalist sound and honest, bare lyrics. On their first east coast tour their friend director Cory McConnell mixes show footage (including performances at the dead but not forgotten Brooklyn venues Death by Audio and Glasslands) and strikingly insightful interviews. The result is the 25 minute documentary Things Are Ok.

In the film, Cleo and Harmony dicuss growing up feeling different, the strangeness that comes with spotlight and public perception, and most fascinatingly, their relationship.

“It’s been about a year since we’ve started, and think what’s changed the most is Harmony and I’s relationship, and how honest and close and comfortable we’ve become with one another,” reflects Cleo.

“Cleo and I’s friendship is really honest, and intimate, and straightforward and turbulent, but only because we’re so honest,” continues Harmony.

In fact, the undeying theme throughout the interviews with the duo is honesty. Sounds like their music.

Their self-titled EP is out now on Wichita Recordings. Watch the documentary below. After you’ve been let in their tour life via film; check out the tour dates below to catch them live.