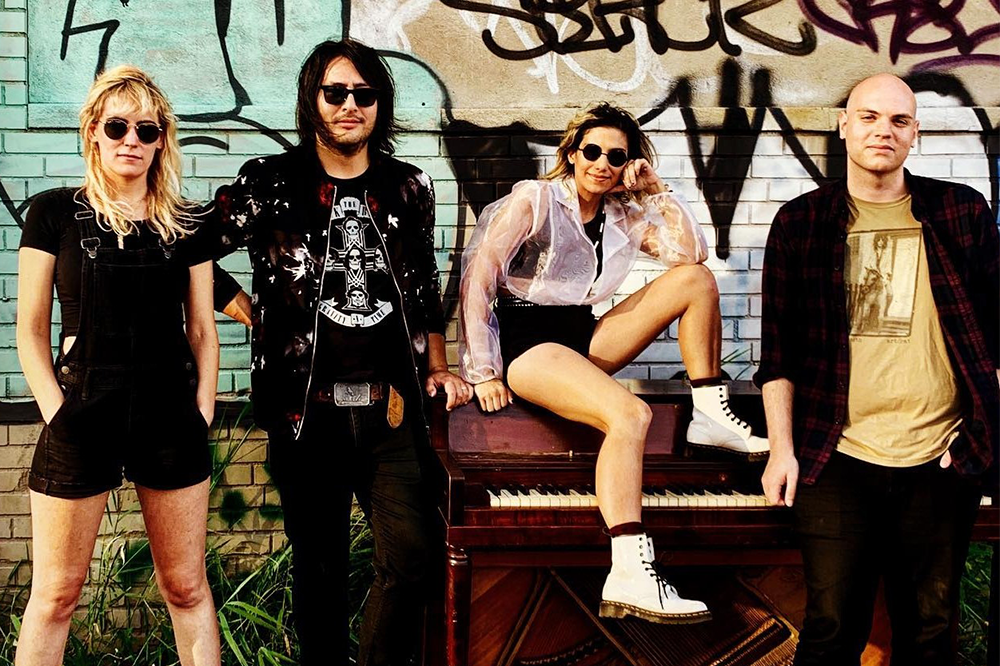 Catty is a Brooklyn band lottery success story. After their names were drawn out of a hat, they quickly churned out a couple songs to play at a show that night with Ana Becker on vocals and guitar, Manny Nomikos on bass and vocals, Bryan Thornton on guitar, and Don Lavis on drums. Rosie Slater (also of New Myths and Delicate Steve) took over drummer duties after Don moved to Minneapolis. They’ve released a collection of demos in July called Scratch, recorded at Cavebird Gallery and their small practice space. Catty plays Alphaville on January 31st alongside Gorgeous, Drummers Can Achieve, and Feral Scouts (it’s Benji’s birthday bash; he’ll be playing with Feral Scouts and Drummers Can Achieve). We talked with all the members of Catty about how they’re actually bird people, what Prince song they would cover, and they even wrote us a couple poems.

AF: You met at a band lottery. How was that first time playing together and what made you want to continue to play together?

Ana Becker: The first time we played, we were grouped together completely randomly; our names were quite literally pulled out of a hat. We didn’t even really know each other very well, though we knew of each other and the bands we each played in. There was immediate chemistry, both personally and musically. We wrote a couple of songs and learned a cover and played it all six hours later, along with the rest of the groups of the hat-pulled. It was really remarkable how much fun we had, how well we got along and how happy we were with songs we wrote absurdly quickly. After the show I felt like I’d just had a super-promising first date – I was really nervous and excited. Was it all in my head? Did they feel the chemistry too? Or was it just me? Could it be the beginning of something very special?

Since then, our original drummer Don Lavis moved to Minneapolis (we miss you, Don!) and we’ve been super lucky to have tricked the inimitable Rosie Slater into joining us! We lured her with promises of Beatles jams.

Manny Nomikos: Everyone was so generous with their creativity. At first I was really intimidated by each of their individual talent, but the support everyone was showing made it less scary to play music with them. Almost immediately, I felt like I wanted to be with these people all the time.

AF: At your first official show as a band you had everyone vote on band names – what were the other band  names that were almost chosen?

AB: I still have the poster board in my room! I’ll have to check it. We wrote down a bunch of options, and gave people post-it notes to write their favorites on. At the end post-its were everywhere so it was pretty hard to count votes, but we did our best. Wrong Legs was one option (I hate snakes, my sister Laura hates spiders, both of them have the wrong number of legs). Our moniker from the band lotto was another choice (“Hayyy Saylor” – not the worst, but probably too whimsical for the vibe of the music). People kept writing THEIR first names on the post-its instead of their favorite band name option… I still find green post-its with random names on them from time to time.

MN: I was just really hoping we didn’t end up being Wrong Legs. I liked Hayyy Saylor, but that would require us write only nautical themed tunes and we only had enough material for two nautical albums.

Bryan Thornton: I really championed the Charlie Manson Band, but quickly found out I bet on the wrong horse. Like bad jeans, the name did not fit.

AF: What is everyone’s favorite kind of cat and/or funny experience with a cat? Since you’re actually bird people, what are your favorite types of birds?

AB: My favorite cat on planet earth is Bruce Squiggleman Kittowitz, whom I recently had to move away from and miss very much. My favorite type of bird is Manny.

MN: I like cats when they get too old to murder. Then they just hang out and it’s alright. I can talk all day about birds, but I’d have to go with Quaker parrots. My first bird (Sproose) was a Quaker and loved music and singing along to songs I played… now I have a nanday conure and she is affectionate but also very complicated.

BT: I’ve grown up with cats always around via both parents – so I’ve always thought that cats are superior to dogs. Dogs are too subservient cause they look at you like some big alien deity that manifests food and shelter, but cats think you’re just another cat (a giant, weird, mostly hairless cat, but a cat nonetheless) so they really don’t mind you much. I like any kind of cat that doesn’t care about my existence so I can try to win their favor and make them think I’m cool.

Rosie Slater: I was raised by cats.

AF: What is the best crowd surfing technique?

MN: Make sure it’s at a rock show, and not a children’s party, unless you want to be uninvited from all future kid parties.

AF: Write me a poem.

AB: You’re the kind of gal I’d cross the street to say hello to
Even if it meant I had to run
We got back from the west coast, and I rented out your bedroom
I didn’t sleep there once

BT: I don’t like massages
And I’ve never been to a sauna
But I once saw your band
Cover Nirvana

AB: Catty’s organizing our SXSW run at the moment, and we’re cooking up a couple of singles to release soon! We worked on two songs so far with Jeff Berner, which has been a pleasure and a privilege. An LP looms in Catty’s future. Personally, in 2020 I plan to spend as much quality time as I can with my guitar, and my loved ones. I’m feeling very grateful lately and it’s corny as fuck, please forgive me.

MN: MacGregor’s Bowerbirds are an amazing bird species that can mimic about any sound and you should look them up now.

BT: I’m afraid of being canceled by the dog community – dogs are great, but just not as great as cats.