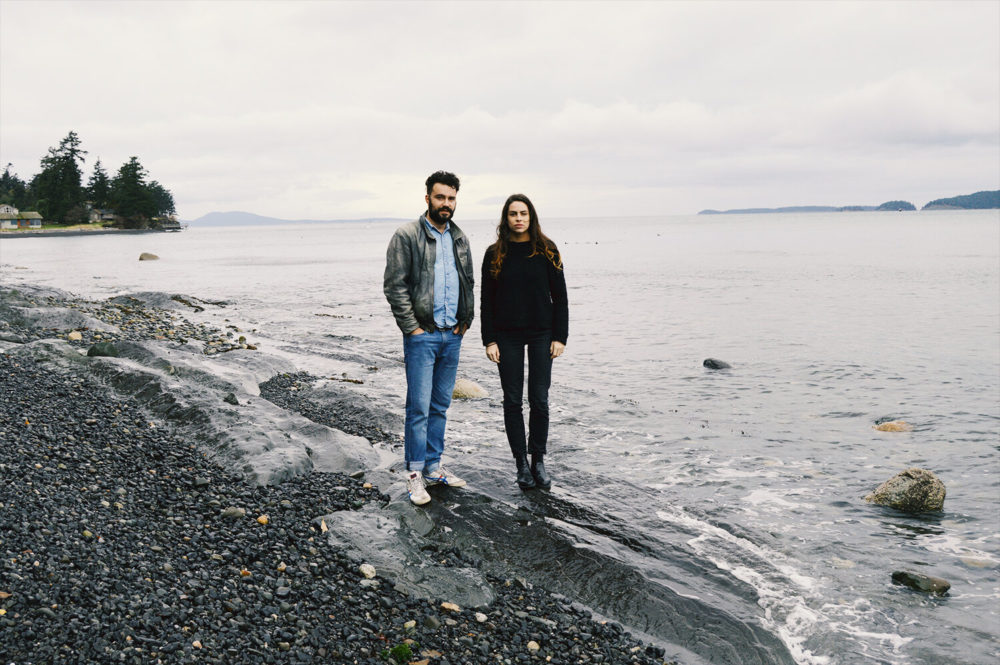 On “Home,” the new remixed single from electro-pop duo White Night, there’s a chime-like synth pattern and haunting vocal loops that swell over a percussive drumbeat. It’s classic indie electronica—and in some ways, not a sound that most people would associate with Seattle. Yet, White Night’s singer and violist, Elizabeth Boardman grew up right here in the Emerald City—this is where her musical journey began, and upon deeper listening, you can hear it.

Boardman remembers her parents playing everything from Nirvana to opera around the house, and at just three, she says she “begged” to start piano lessons. “I remember, from a very early age, taking comfort in the distraction and creative wholeness felt in sitting at the piano and improvising your own little songs,” she says. “I started playing viola when I was eight and as soon as I was old enough to join the Seattle Youth Symphony orchestra program, I fell in love with the sweeping romance and drama of composers like Tchaikovsky and Sibelius.”

After completing Garfield High School, Boardman moved to London to study viola performance at the Trinity Laban Conservatoire of Music and Dance and then later completed her Masters of Music at the San Francisco Conservatory of Music. It was there Boardman met German-born Willi Leinen, a Classical Guitar student, and the two began dating and making music together.

“Both of us had composed a bit on our own and Willi had been in a couple bands, where as I had only dabbled a little in pop songwriting before we started working together,” said Boardman. “But we both had that creative itch that was a relief to scratch amidst the stiffness and stress of our classical studies.”

Initially, Boardman and Leinen were only able to collaborate virtually, sending musical ideas to each other over the internet, since Leinen had moved back to Berlin and Boardman was still in the San Francisco Bay Area.

“Our first songs were put together across the ocean,” said Boardman. “We had our first radio airtime on a German radio station, [and] we hadn’t even played the music in the same room together. We’d only done it long distance.”

Boardman then moved in with Leinen in Berlin, partly to be closer to a major epicenter for classical and electronic music, and to take advantage of the city’s affordable living and vibrant culture. Since, the two have continued to hone the alternative synth-pop of White Night, drawing both on the mood of the Pacific Northwest and the electronic scene in Berlin.

For instance, on the title track from their 2018 debut album, Golden Heart, there’s the sweeping drama of Pacific Northwest scenery adorned with cinematic textures, strings, and a music video featuring many shots from the San Juan Islands. Musically, the track could sit alongside the music of Pacific Northwest indie-folk artists like Damien Jurado, Fleet Foxes, and Noah Gundersen. Meanwhile, another single on Golden Heart, “Money,” has more distinct Euro-pop flavor. A techno dance beat underpins as Boardman speak-sings, “Fancy cars/fancy clothes/what is real/what is fake/Money makes it yours to take.”

This newly-released version of “Home” is the best of both worlds. Originally appearing on Golden Heart, remix duties were handled by their friend, German drummer Hanns Eisler, who goes by INGO. The intoxicating momentum and precision in production ties the track to the vibrant electronic music scene in Berlin. At the same time, there’s also a good dose of the raw authenticity and quirkiness of the Seattle indie folk sound; “Home” brings to mind Northwest-bred Benjamin Gibbard’s work in Postal Service, as well as ODESZA and Feist.

Lyrically, the song explores what “Home” is and there’s a moody tension that swells throughout the track—almost as if the singer is in two places at once. “The song is about the concept of one’s ‘home’ being a collection of memories and nostalgic feelings which are untainted by time. Relationships, individuals, environments and circumstances are constantly evolving, appearing, and disappearing as one goes through life. Home is what we hold still in our minds and in our hearts,” explains Boardman.

The release of this single marks a new period for White Night, who have toured much with Golden Heart throughout Germany and the West Coast of the U.S. since last year. Right now, they are looking forward to writing a new EP, continuing to teach classical music from their home studio in Berlin, and eventually, to getting back out on the road.

“We are very excited to keep songwriting and hone our genre and style before we plan any bigger tours,” said Boardman. “For now, we are back to the songwriting grind-stone!”