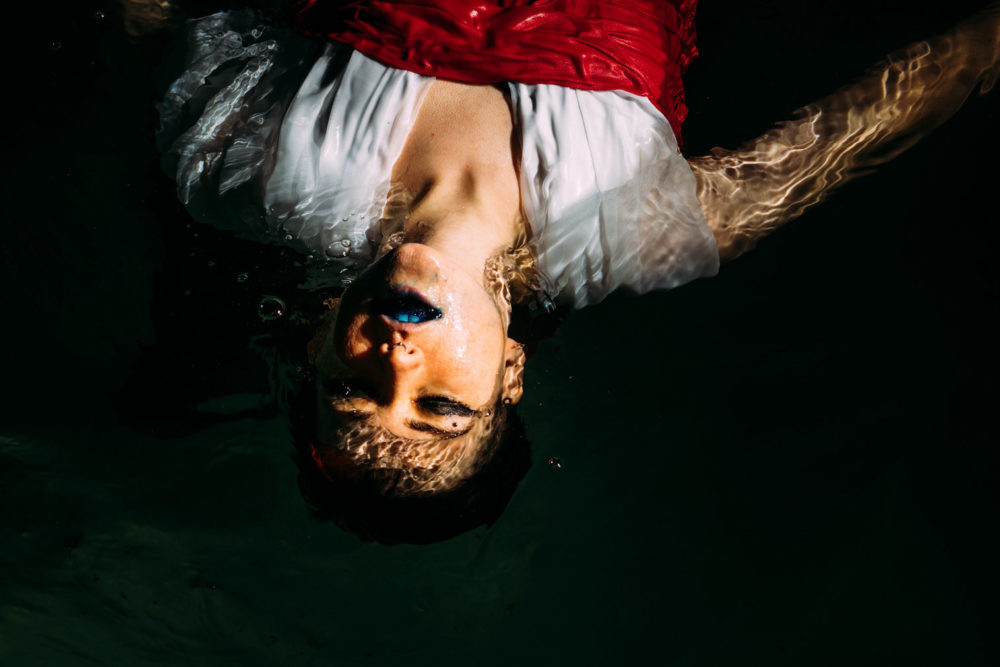 At the age of 22, producer and songwriter Imogen Jones, best known as Lupa J, has eclipsed the dreams of many musical creatives twice her age. Debuting three tracks on Soundcloud at the tender age of 15, she has been championed by local radio station Triple J and supported international acts like Grimes, Alice Glass, and Tegan and Sara on their tours. With three EPs under her belt, Lupa J released her debut LP Swallow Me Whole just last year, and she’s already close to completing her next project. At the end of April, she shared the darkly intoxicating video for her latest single, “Limbo.”

Much of Lupa J’s work centers around its creator’s ever-evolving relationship to gender and sexuality, while its urgent synths and turbulent beats add drama to the dance floor-worthy anthems. The artist’s relentless creative cycle is fueled by a deep desire to understand and embrace her identity, her internal inquiry representing a surging generational shift toward a more open, post-gender future.

Apart from her solo career, Lupa J spent the last six years starring in The Weather Diaries, a Sydney Film Festival documentary about the effects of climate change helmed by her mother, Kathy Drayton. Released this year, the documentary can be streamed via the SFF website.

We talked with Lupa J about her career trajectory, dismantling sexism and the gender binary, and opening for her musical idols.

AF: What is the meaning of your stage name?

LJ: Lupa translates to ‘she wolf’ in Latin. I became obsessed with the Studio Ghibli film Princess Mononoke when I watched it as a 7-year-old. I dressed up as San, the wolf girl character from it, for years. I named my project to honor that obsession and what that character meant to me as a kid. The J stands for my last name, Jones.

AF: How long have you been making music?

LJ: I’ve been making electronic music since I was 15, so a bit over 6 years now. I learned violin from when I was 6 and started experimenting with songwriting on piano when I was 13.

AF: When you posted music to Soundcloud at the age of 15, who did you hope would hear it? Was your intention to be discovered by radio/labels?

LJ: When I put my first tracks on Soundcloud I had no idea that anyone other than my circle of friends would hear them! I had no idea that the music blog world existed, or that labels or industry people would come across my music. I was shocked when I first discovered that I had been written about on a blog.

AF: Tell me about your EPs and how they each reflected your mood and focus at the time of writing and recording.

LJ: My first EP, The Seed, is a collection of some of the first songs I ever produced. I was 16 when I made it; I had recently come out of my first relationship and had a bit of a teenage identity crisis. I was starting to reject a lot of ideals of gender and femininity that I had deeply internalised, so starting Lupa J and making those early songs was a massively therapeutic part of that upheaval. There’s this sense of naive hope and confidence in those early songs that feels very unique to being a teenager, but there’s also quite a bit of anger in some of them.

My second EP, My Right Name, was made as I was finishing my final year of high school, just before I turned 18. Overall, it’s a lot darker than my earlier music – extremely anxiety riddled and inward looking. I was still really struggling with shaking off a lot of internalised gender norms, and felt like an outsider at my highly competitive, conservative school.

My third EP, A House I Don’t Remember, is also fairly dark, and in some ways the most experimental set of tracks I’ve made so far. I was thinking a lot about the way childhood experiences shape the way we engage with each other – the things we repress and how they inevitably always affect us – looking at myself but also different friends and relationships.

My debut album, Swallow Me Whole, is definitely the most energetic set of tracks I’ve released. The mood is extremely chaotic – it swings from darker feelings of reflectiveness to excitement, desire and anger. I wrote it as I was starting to untangle the first inklings of my queerness – an intense realisation of my preference for same sex attraction within a long-term straight relationship. My early fantasies of queerness – desire finally clicking into place – is the driving force behind the urgency and ecstasy that’s present throughout much of the album. But there’s also this somewhat political anger behind a few of the tracks – a deep frustration at how heteronormativity had affected my perception of my own body, and my sense of gender.

AF: Is live performing something you struggle with or does it come easily to you?

LJ: I’ve always loved performing my own music live. When I was learning classical violin as a teenager though, I would just about die from anxiety every time I had to perform solo. Playing my own songs feels very different – I just focus in on the feelings behind each song, and what I’m actually saying to the crowd, and then the technical challenges of performing don’t freak me out as much.

AF: Billie Eilish has come out recently to criticise all the people who have opinions on her teenage body. As a female artist, do you feel that there’s a sense of acceptance around opinions and even trolling of women with public profiles?

LJ: Definitely. Misogyny, gender normativity and objectification are still deeply rooted in every aspect of our culture. It’s entrenched in every industry, but people definitely have a particularly strong sense of entitlement when it comes to picking apart and undermining female/GNC public figures. When I released my first music video with a shaved head as a 17 year old, a man felt the right to comment that it made me ugly. That sort of stuff obviously just gets worse the more attention you receive. There’s a lot of work that needs to be done with dismantling sexism and the gender binary before people stop focusing on female bodies and attacking anything that deviates from idealised norms.

AF: When did you first get into electronic music and which artists are you loving now?

LJ: I got into electronic music after a friend introduced me to Grimes when I was 15. Lately I’ve been really into Arca, FKA Twigs, Sevdaliza, Caroline Polacheck, Jenny Hval, Charli XCX’s new record, Lorde, Thom Yorke, the list goes on.

AF: Who have you toured with and what have those artists taught you about performance, life on tour and dealing with reviews and media?

LJ: In 2016 I opened for Grimes, Tegan & Sara, and toured nationally with Sarah Blasko. In 2018 I opened for Alice Glass. Grimes was always a massive icon for me. Especially in my early days as Lupa J, I would watch her live videos and interviews religiously. I guess she taught me that it’s cool to be honest and just say what you think in interviews, and just not give a shit. I didn’t actually get to meet her at the show unfortunately, she apparently had a stomach bug and vanished immediately after her set.

AF: How important has radio play been to your career and how has Triple J Unearthed been part of building an audience?

LJ: I think radio play is seeming less crucial to artists’ careers now thanks to Spotify playlists. It was more significant back in 2014 and 2015 when I was a finalist in Triple J Unearthed’s ‘Unearthed High’ competition, which lead to a lot of radio play, people buying my songs on iTunes and following my social media pages. These days, the main way people discover me seems to be through live shows or playlists.

AF: Can you envision living and working elsewhere and where would you imagine that being?

LJ: I live in Melbourne and love it, so I am keen to remain there for a good few more years! I’d love to at least visit Berlin though, maybe live there for a little while.

AF: What are your current plans – are you writing, recording or planning live events?

LJ: I’m currently working on my next body of work – it’s close to being finished, we’re planning singles and music videos at the moment!

AF: Where can readers hear your work and connect with you online?

LJ: My music is on all streaming services, as well as Soundcloud, Youtube and Bandcamp. Basically anywhere you can Google!