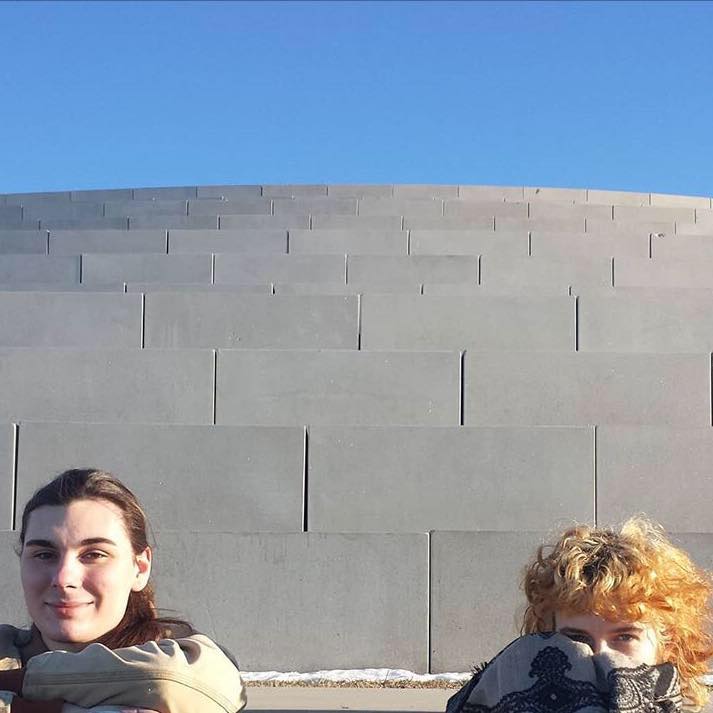 This is how I wrote this review: I listened to If I Had Known for an entire day, ears devouring my headphones as I walked from my office, to get food, to my home, and again as I rode the bus downtown, where I was set to be a Legal Observer at a political action, and again on the bus home, after I observed eight arrests of peaceful protesters. I sunk myself into it, letting the songs dissolve into the day’s feelings: my fear of the aggressive cops downtown; the social distress which has crept up on me in the past weeks; the wariness I’ve felt, stepping into online discourse around Pride; the way I thought to myself yesterday: “maybe I’m too tired to be proud this June.”

Columbus’ Queer Kevin released If I Had Known, their debut album, a year ago, but it only became available on Spotify this week. Beyond the re-release and upload, it seems appropriate to revisit the album during this time: the group, comprised of Felix O’Connor and Dylan Reese, is set to come out with their second album soon; the multi-disciplinary arts space, Bloom, that O’Connor and others have spearheaded is set for a pop-up event on June 24th; and June seems like an optimum time to listen to Columbus voices for queer and trans advocacy and liberation.

If I Had Known is thickly instrumental, Reese’s drums and O’Connor’s bass obscuring the vocals (also by O’Connor) so that they appear to be crystallizing through fog, or wafting in from another room. It’s a haunting effect, and one which makes it difficult to discern, on the first try, exactly what O’Conner is saying. Instead, the emotional weight is carried through vocal quality and pitch–each note, weighted by the heavy bass and drum lines, seems to be dragging itself forward despite the burden of attached feelings. Or, as the pair say on their bandcamp: the album is comprised of “songs about crying, or whatever.”

In public, I criticize coming out narratives for the ways in which they force self-disclosure from queer and trans people, continuing the violent idea that breaks from heteronormativity must be explained away, presented to be examined. In private, I just don’t have the energy. Sometimes, I think of switching my pronouns once again, just so I don’t have to advocate for myself as often. Waiting for others to intervene drains me daily.

Last year, I celebrated pride by attending the trans march in San Francisco, working a merch table on the day of the parade, getting paid, then immediately blowing the money on a haircut. I spent thirty minutes in front of the diffused light of my curtain, taking selfies until I found myself blurred and unrecognizable. “You know how if you look at something long enough it just becomes shapes?” I asked on my instagram caption. “That’s how I feel about my face.”

As much as the album’s affect is driven by its composition, the lyrics, when unveiled, are equally poignant. On “La Luna,” O’Connor sings: “I fell in love with the moon / glowing against my skin / something inside of me / awoke ancient and lost [fusion_builder_container hundred_percent=”yes” overflow=”visible”][fusion_builder_row][fusion_builder_column type=”1_1″ background_position=”left top” background_color=”” border_size=”” border_color=”” border_style=”solid” spacing=”yes” background_image=”” background_repeat=”no-repeat” padding=”” margin_top=”0px” margin_bottom=”0px” class=”” id=”” animation_type=”” animation_speed=”0.3″ animation_direction=”left” hide_on_mobile=”no” center_content=”no” min_height=”none”][…] some days I am a looming cloud / and some days I reign soft / no matter the weather / she stays.” The pairing of surreal sensory detail and planetary personification is moving, and reminds me of another piece of beloved queer art: J. Jennifer Espinoza’s “The Moon is Trans.”

Other lyrics get straight to the point, though that point is no less meaningful. “We’re here, we’re queer, get used to it,” O’Connor announces on “here/queer.” The line is sandwiched between two verses with gut-punching descriptions of bodily control and implied harm, implying that the need to “get used to it” is imperative for the speaker because social discomfort and fear comes with the threat of violence. “Break my back and break my soul / kill me with every step you go / wake up cold, afraid, and alone / I am not a monster,” O’Connor sings. In the last vocal line, this lyric shifts–instead of the speaker advocating for themselves, they confront the listener. Says O’Connor: “I am not your monster.” The result of this progression, as well as the repetition of the “here/queer” refrain, is a song which simultaneously asks listeners to question their complicity in queer death and harm, and assures those same listeners that queer folks will exist despite.

After the trans march in San Francisco, my friends and I spent hours walking through the city, laughing through the cool summer air. In Dolores Park, we rolled down grass hills until we were too dizzy to stand. I texted my crush. I realized I hadn’t eaten all day, and we left to get burritos.

This is to say that I only know Pride in how I take care of myself, of my friends. Pride, people say, was a riot–but it was more than that, too, the public unveiling of networked safety and care that queer and trans folks had developed for decades. Riots last more than one night. They are sustained not only by sheer will, but by relationships strengthened by trust, need, the willingness to see one another, to sit at the same table. Marsha P. Johnson and Sylvia Rivera did not only throw bricks; they spent years housing and feeding the trans people, street queens, and sex workers around them. And the work never stops–despite erasure, despite the constant movement and effort needed to keep the names and histories of elders afloat, we know Johnson and Rivera’s names today through the work of another trans woman, Reina Gossett, who sustains the veracity of their legacies with her careful attention and light archival touch. Another member of Johnson and Rivera’s community, Miss Major Griffin-Gracy, has continued to advocate for trans folks–especially incarcerated trans women of color–for decades. And the legacies of Johnson and Rivera’s radical work, including S.T.A.R. house, continues to inform the community’s fight for safety and freedom today.

After repeat listens, I am still bowled away by Queer Kevin’s skillful instrumentation and craft on If I Had Known; the album manages to suggest a kind of intimate interiority at the same time that its insistent drum and basslines push the tone and speed of the music. The vocals, intelligible and shifting, pull the listener in, as one whispering a secret might draw their confidant close, but the musical tone is assertive, confident, dark, and driving. It is this weaving of multiple levels, emotions, and points of entry that wraps around me each time I listen; my desire to unravel and then piece the album back together is parallel to my desire to unravel and then piece my own hurts and joys and wants together.

There is a kind of desperate strength to this album that I recognize in myself, and many of the queer and trans artists around me. It is strength desperate in its exhausting and constant need, in the need to take care of one another, to make resources and love out of nothing. But it is a fierce and unending strength too, the ability to fight for yourself, for your friends, to stand and say, clearly, as Queer Kevin does on “Burn all Cis Men,” “you will not hurt me again or I will guarantee to you / you will burn / don’t touch me or it will be the end of your time.”

Most of all, the ability to fight and keep fighting is strong because it is part of a legacy of radical love which reaches back decades. On the bus, listening to If I Had Known, I think of all of the friends and family I have chosen to care for, and to let care for me. I think about how revolutions are built on relationships, and of the connective tissue that has held queer and trans artists together, and which has kept them alive, despite.[/fusion_builder_column][/fusion_builder_row][/fusion_builder_container]