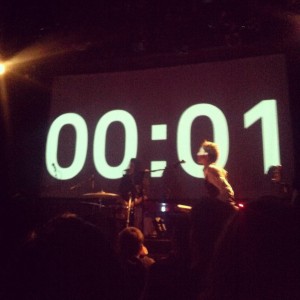 Mike Doughty has been through a lot in his musical career.  He divorced his commercially successful band Soul Coughing, which he considered a “dark, abusive marriage”, was dropped from Warner record label, and battled it out with a drug addiction.  Through his struggle, he’s grown into a grounded solo artist who makes music with simplicity, sincerity and wisdom.  This June 19th he brought his stripped down singer-songwriter act to Music Hall of Williamsburg, and shared the headline with Low, another Americana inspired band.  Doughty’s mischievous demeanor and catchy singer songwriter style balanced Low’s emotionally drenched slowcore approach.

Doughty’s songs revolve around poetic storytelling.  Doughty recently released a book of poetry entitled Slanky, and uses this brand of poetic wordplay and fantastic imagery in his lyrics.  The lyrics are heady yet relatable and touch on classic folk and americana themes of love, leaving and emotional journey.  With only guitar and drums on stage, the vocals are exposed; thus his strong lyric writing abilities carry the songs.

“Looking at the World from the Bottom of a Well” is Doughty’s most commercially successful song, and was created out of literary inspiration from Haruki Murakami’s novel Wind-Up Bird Chronicle.  On stage, Doughty quips “Sandra Oh made out to this song in an elevator once.”  The hit song was indeed featured in an episode of Gray’s Anatomy, as well as on Veronica Mars and on David Letterman.  Doughty also draws inspiration from John Denver, and his latest album The Flip Is Another Honey includes several covers.  “Sunshine on My Shoulders” is a cover of Denver’s “Sunshine”, and unexpectedly incorporates rapping.  The impetus for this style mash-up, Doughty explains, is that he needed to impress his rapper girlfriend.

Doughty’s music is best live, as he inserts amusing tidbits of his musical journey and colorful past.  Doughty quickly lets the audience in, shares his secrets and disarms the crowd.  His guitar playing is not virtuosic, nor does it need to be.  He plays with unique flare, as though his guitar is nearly too hot to touch, and keeps an upbeat rhythmic style coursing throughout.  He pokes and prods drummer Pete “Pancho” Wilhoit, as Wilhoit has quite the serious attitude in relation to Doughty.  The exchanges between the two were entertaining, partly because Doughty’s musical background sounds more instinctual than technical, and can be a challenge for a technically minded drummer to follow.

Dave Matthews is a professed fan of Mike Doughty, and it’s no wonder; they sound quite similar at times.  Just add a soulful saxophone solo to Doughty’s “Looking at the World…”, and the Matthews songwriting formula is captured.  Doughty’s signature vocal lilt and low bluesy rasp, folk rock/blues influenced range compares closely with his American rock contemporary.  Yet Doughty diverges from Matthews in his stripped down performance style and ability to catch his audience off guard.

Mike Doughty has released five solo albums and is currently in the process of reworking some of his older Soul Coughing songs.  His music connects to emotional depth and honesty, but keeps it light all the same.  He’s a singer songwriter who boldly shares his wisdom from mistakes and struggles, all with a twinkle in his eye.

Low has made a career of slowcore, which is a feat to sustain over the course of their lengthy run as a band.  The slowcore genre envelops listeners with minimalist melodies, downbeat tempos and emotionally vulnerable vocals.  Low embodies this genre, and rarely diverges from the melancholy mood they create onstage.

The band is based out of Duluth, Minnesota.  In my college years at the University of Minnesota Duluth, Low was an unforgettable musical discovery.  In 2009 I saw them perform on a small stage of Teatro Zuccone, and I was electrified by their ability to shift the mood of the entire theater, hush and lull the crowd, and create a beautifully vulnerable performance.  Now, seeing Low again after all these years, I was elated to hear the band stay true to their roots and the sound they crafted years ago.

Low played plenty of crowd pleasing hits from their catalog, including “Violent Past”, “Monkey”, and “Dragonfly”, but also languished in their newest album The Invisible Way.  This album breaks a bit from their traditional sound, as the music focuses more on drummer Mimi Parker’s vocals.  She sings with a rich, dark , trembling tone, and her vocals are thick with expressiveness and a hint of sadness.  Parker typically sings harmony to Alan Sparhawk’s lead vocals, so this shift added greater variety to their sound as a band.

By committing to this  mood influenced style, Low limits their musical range.  The band rarely performs upbeat music, although they do have the ability to uplift their listeners or bring them to a sad melancholy state.  Their vocal harmonizing melts the heart, and Steve Garrington expertly upholds the melody on piano and bass.  Parker’s drum playing is extremely simple and straight forward, and serves as the heart beat of the band.

“On My Own” was a weak spot in the set.  The song is off the latest album, and falls flat on stage.  Sparhawk sings the words “happy birthday” over and over until he begins to sound like a broken record.  Possibly the intention was to transport the audience through repetition, but to where, it was unclear.  Low closed with the song “Canada”, which has a driving drum beat and an uplifting mood, and showed off the band’s emotional range.

The set at Music Hall of Williamsburg was pretty, emotionally wrought, exposed, dark, sad, gentle and intense.  Low captures so many nuances in their songs, and continues to grow and deepen as a band.  If you’ve been a longtime fan, or are hearing them for the first time, you’ll hear a sound that is current and familiar all at once.