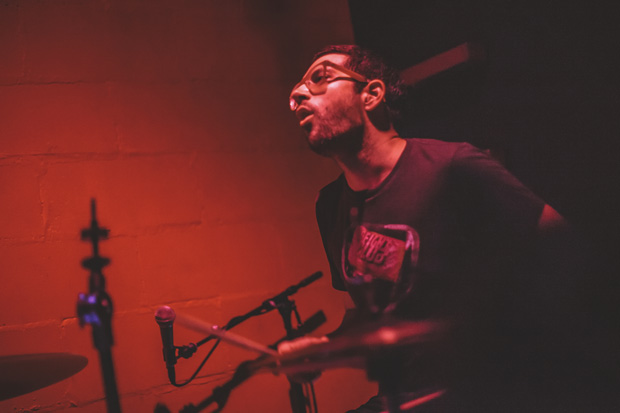 The house was packed at Rockwood Music Hall for the album release party of Beat Music this April 25th.  A solid vehicle for Mark Guiliana’s signature brand of drumming, Beat Music combines jazz, rock, drum n’ bass, experimental electronic, and more, and melds these styles into a new amalgamated genre.  Modern Drummer magazine states Mark Guiliana “may well be at the forefront of an exciting new style of drumming.”  Guiliana’s precise yet unpredictable technique is thrilling to experience.  An equally eclectic cast of musicians joined him on stage for a night of densely packed rhythms and dark yet danceable electro-inspired hooks.

Guiliana gained acclaim for his long-time partnership with jazz bassist Avishai Cohen.  The pair toured internationally, and notably played and recorded at world class jazz club Blue Note, among other such venues.  Guiliana joined the electro-groove trio Now vs. Now with keyboardist Jason Lindner and bassist Panagiotis Andreou, and the group continues to perform in New York City and abroad.  Beat Music is a new iteration of Guiliana’s highly stylized drumming and original compositions.  This release marks the first album under the Beat Music moniker.

To pin down Mark Guiliana’s style is tricky, as he seems to have created his own technique.  He continually changes up rate, phrasing, dynamics and instrumentation so his sound constantly evolves.  He anchors the music with his aggressive, inventive beats, and simultaneously establishes subtlety and nuance.  Musicians in the audience were quick to absorb his penchant for a-typical time signatures and mathematical precision.

Steve Wall and Guiliana are responsible for weaving electronic texture into the music.   Wall uses a Novation Launchpad to trigger recorded vocal samples, such as dial tone operator messages and sampled quotes from speeches.  The recordings sometimes disintegrate into bizarre, warped tones that can give the music a psychedelic feel.  These speech recordings are interspersed throughout the songs, and add narrative to the set as a whole.

Singer Jeff Taylor made a guest appearance part way through the set.  He is the modern jazz rock incarnation of Tom Waits.  Taylor nearly explodes onstage with energy and a bent towards uninhibited expression.  He throws wild curve balls with his voice.  He oscillates between an exposed, breathy pop quality, and a rumbling, raspy low belt that seems unhinged from reality.  He scats, screams, whispers, croons, and electronically enhances and distorts his voice.

Taylor scaled back a bit for a duet with jazz vocalist Gretchen Parlato.  Parlato slowed things down by deploying her smooth, hushed tones on a gentle yet smoldering song “Heernt.”  She brought some much appreciated femininity to an otherwise male dominated set.  Parlato and Guiliana recently announced their engagement, so fans can hope for more collaboration to come.

Chris Morrissey is a smart addition to the group, as his bass playing is as inventive as Guiliana’s beats.  Morrissey gained experience playing with a long list of Minneapolis based artists.  As I spent my college weekends driving into the Twin Cities to see bands like Mason Jennings, Haley Bonar, and The Bad Plus perform (all of whom Morrissey has played with), it was a treat to see a fellow Minnesotan establishing himself in New York.

Long-standing collaborator Jason Lindner manned the synth keyboard.   Lindner’s love for complex rhythms seems inseparable from Guiliana’s musical vision.  The two thrive on each other’s energy and match one another in technical ability.  With over 35 recordings under his belt, Lindner is an active player in the jazz tradition.  He seems to be having the most fun on stage, and his exuberance is contagious.

Although Beat Music focuses on Mark Guiliana’s signature drumming style, the music ultimately relies on the individuality and technical mastery of a colorful lineup of musicians.  This project is a fresh take on a wide range of genres, and defies typical categorization.  Beat Music is for listeners who like to be challenged and surprised.

The Beat Music album was released under Rockwood Musical Recordings, and is available for download at http://rockwoodmusichall.com/recordings/10-mark-guiliana-beat-music.html