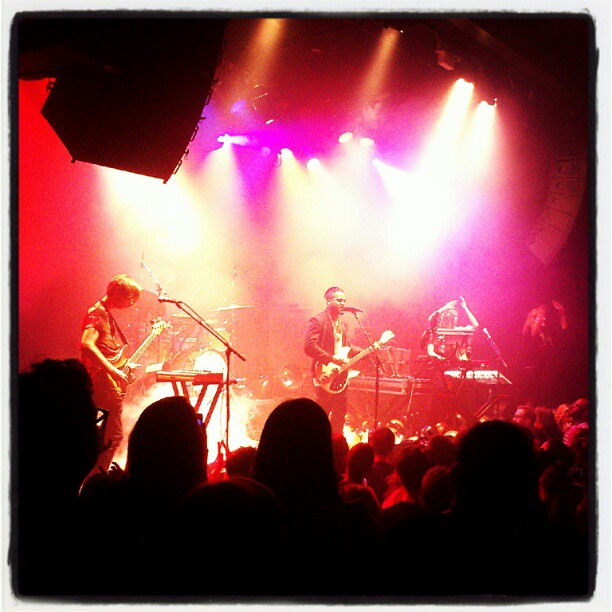 It was not without drama that I came into a ticket to Twin Shadow’s second of two sold-out NYC performances.  I’d planned to skip both sets since tickets were $22 and one of them was at Webster Hall, which I kind of hate.  But a friend of mine who’d gotten tickets in advance had just turned thirty, thrown a temper tantrum, and bailed, so I found myself at Music Hall of Williamsburg.  I’d seen Twin Shadow play a CMJ show at Le Bain in October 2011, with the twinkling ribbon of the West Side Highway unspooling across giant glass windows behind the band.  I’d ruined a suede skirt by spilling wax on it in attempt to light a joint in the bathroom; I’d also embarrassed myself during the dance party afterward when I toppled sideways in uneven heels at the very moment I’d finally caught the eye of the tall, bearded dreamboat I’d been spying all evening.  As it turns out, he had a girlfriend anyway.

But I’ve come a long way in the last year, and so has George Lewis Jr., the man behind Twin Shadow.   He has released two albums to tons of critical acclaim (including Pitchfork’s coveted Best New Music for this year’s Confess on 4AD), survived a motorcycle accident to have an epiphany that majorly influenced the songwriting and recording of his sophomore album, and headlined a two month tour across the United States and Canada.  The MHoW show was the second-to-last stop on that tour, and the fact that Lewis is a bit fatigued from it all was likely a factor in his somewhat bitter between-song banter.

Twin Shadow’s songs have been compared to just about every pop band from the eighties, and it isn’t hard to hear why.  2010’s stellar Forget, produced by Grizzly Bear’s Chris Taylor, was all airy synths, anthemic choruses, bouncy bass, and shimmering guitar riffs.  These parallels also grew out of Lewis’ personal style, in which leather jacket and pompadour were de rigueur.  With lyrics hopelessly meant for chanting (namely that moment in smash single “Slow” when Lewis croons “I don’t wanna believe / or be / in love”) it was pretty inevitable that Twin Shadow would blow up, and when Confess was released it was apparent that he’d stayed on that same trajectory and managed to amp up the nostalgia factor even further.

Honestly, Confess is almost too over-the-top for me.  In certain moments, like personal favorite “Beg For The Night”, it takes the form of giggle-inducing orchestra hits which are somehow still endearing.  But on album opener “Golden Light”, the backup vocals sound so much like the closing theme from Lost Boys that I can’t even see past it to enjoy the rest of the song, which is unfortunate since without that, it would actually be really lovely.  Slowly but surely, however, Confess has grown on me; it’s something in the transition of Lewis’ low, sultry moans into easy falsettos, the urgency and desperation on songs like lead single “Five Seconds”, the heartbroken but detached callousness of pretty much every lyric Lewis has ever penned.

That cockiness is something that Lewis may as well have trademarked at this point.  While his swagger is not unwarranted, it certainly permeates every aspect of his persona, from song to image to stage banter.  I had always assumed that it was a bit put on, but last night’s show may have convinced me otherwise once and for all.  When I saw him less than a year ago, he didn’t say much and mostly kept his eyes trained on the floor while he hunched over his guitar.  Friday’s performance was an entirely different thing – he wore his mohawk slicked back, jumped around on stage with his guitar swinging, and belted out his most raw lines with fierce bellicosity.

It started in a low-key manner, with a slow, stripped-down solo performance of “The One”.  A guitarist, keyboard player and drummer joined him on stage and they moved through a setlist featuring the four best tracks from Forget and all but three cuts from Confess.  While “Slow” was incredibly disappointing (he sang choruses out of turn, feedback screeched), “Castles In The Snow” had to be the show’s highlight; the live version was huskier and grinding in all the right ways, with basslines blaring and buzzing.  But even in the more rote performances, something intense was happening, at least to me, most notably during his performance of “Run My Heart”.  So much of Confess is seemingly infused with a summery mood; it was birthed in Los Angeles, where Lewis fled to escape brutal Brooklyn winters when he was writing and recording the album.  But its darker power comes from what happens when the sunshine fades, from that realization that summer is ending and that with that death, romanticism is doomed.  When Lewis sang “This isn’t love / I’m just a boy / you’re just a girl” it acted as a grim reminder to that harsh reality.

Between songs, Lewis rewarded Brooklyn with some backhanded compliments, then promised to move back and abandon his 3,000 square foot loft in Silver Lake (and its jacuzzi) if the crowd screamed loud enough for him.  So not only is he actually cocky, he also doesn’t seem to realize how a bragging about his success might sound to a bunch of folks who paid slightly inflated ticket prices just to dance at his feet.  He made this trespass up slightly by unleashing a bunch of gold and black balloons on the audience, but the kicker was closing out the show with a cover of “Under Pressure” dedicated to openers Niki & the Dove (who I’d missed).  The cover was rather epic and he proved his chops in performing it shockingly well, ensuring that it will be all anyone really remembers about this show.

All in all, Twin Shadow’s live shows are a tad sloppy compared side-by-side to the obsessively glossy production on his records, but Lewis, let’s remember, is relatively new at this.  He has toured extensively in the last few years, and if nothing else has come out of it, he’s certainly perfected his rock’n’roll idol swag.  Even if this moment doesn’t last much longer than it has, his penchant for making ultra-nostalgic records will ensure his place in the collective consciousness of everyone who came close enough to touch it.  And he’ll be sneering back at us, telling us all how hollow it really is with tears in his eyes.[/fusion_builder_column][/fusion_builder_row][/fusion_builder_container]