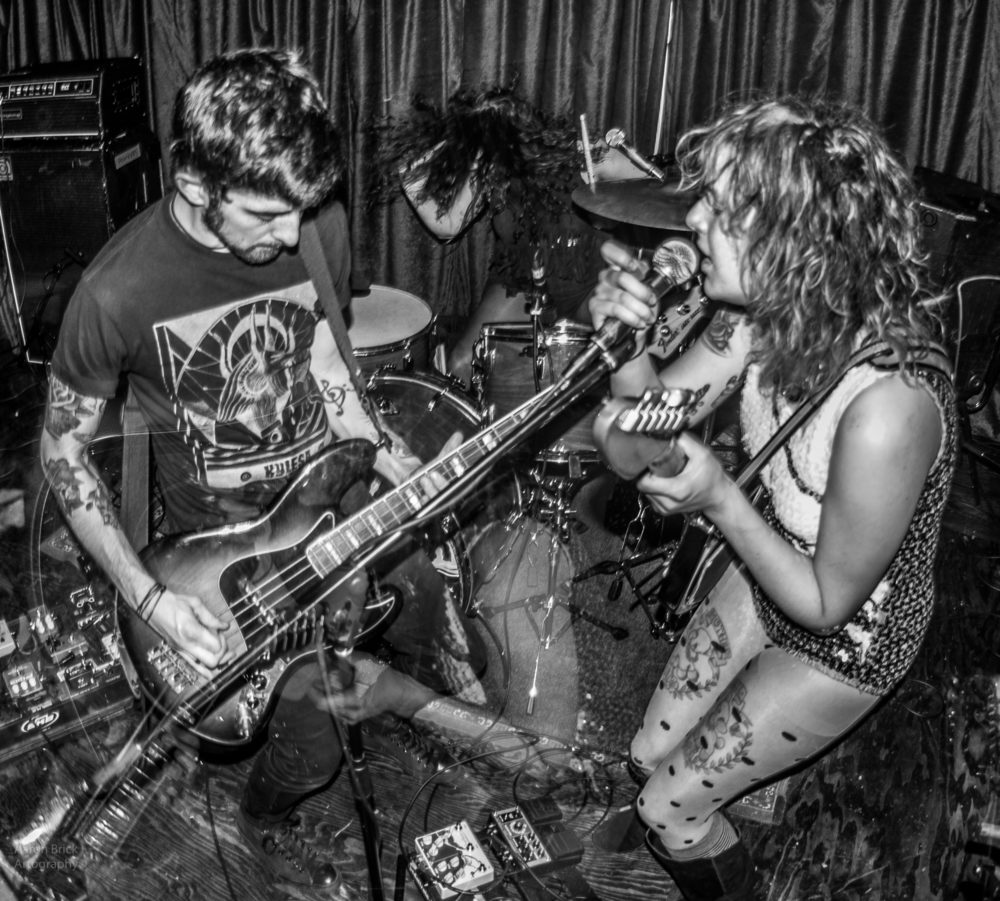 In Seattle’s Ballard neighborhood, there’s a beloved diner called Hattie’s Hat—a dim wonderland of emerald vinyl booths, thrift store treasures, and, backlit against the large oak bar, dozens of gleaming bottles of liquor.  A dive bar with highway-diner charm, it just so happens to be the spot where the members of Wild Powwers, one of Seattle’s most original post-grunge rock trios, met while working as bartenders.

In the five years since, Wild Powwers has released three albums, one EP, and a live record of their quintessentially moody rock. In fact, their popular sound is a lot like Hattie’s—two parts rasping, aggressive punk, one part vintage glam.

Their latest album, Skin—which was recorded by Billy Anderson (Melvins, Neurosis, Jawbreaker) and mastered by Ed Brooks (Pearl Jam, Heart, REM)—dropped in October of 2018.  Brooding, aggressive and fully-formed, Skin captures Wild Powwers at their best. Seattle audiences have another chance to hear it live on Friday, December 20th, when Wild Powwers headline a killer bill with Razorclam and Deep Creep at Belltown Yacht Club. Audiofemme caught up with lead singer Lara Hilgeman before the show for a little background on the group’s evolution, the impetus behind Skin, and more.

AF: How did Wild Powwers get its start?

LH: All three of us worked at Hattie’s Hat in Ballard at the time and Lupe still does. We were all playing in other bands. Lupe and I decided we wanted to form a band one day when we were bartending, and talking about how Powers was a cool name (it’s also a whiskey at our bar). We started jamming in Lara’s basement, and we swooped Jojo after 6 months of playing together. Everything just clicked and we never looked back.

AF: You guys have been together for 5 years, playing in Seattle and all around the country. What about Seattle keeps you here as a group? And, are there qualities that define live shows in Seattle as compared to other cities?

LH: What’s kept us together is the same thing that keeps a couple together – we love each other and even at the low points we still love what we are doing and want to keep doing it. We’re continually inspired by each other and love writing together.

Seattle is our home base, and our sound is indicative of three people who spend a lot of time in a basement writing music when it’s too miserable to go outside. We have a pretty cool community here that supports us immensely. We love our city even though it’s changed dramatically over the years.

Seattle shows are interesting in the way people behave at them. It seems like they are intensely focused on what they are watching. Sometimes they’ll let loose and start a friendly mosh pit (like at our most recent local show), and we are grateful for all of that. We also get FAR less sexist commentary at shows here than we do on tour. In so many other cities, we have people tell us they’ve never seen women do what we do, which is unfathomable in Seattle. We feel extremely supported at shows here.

AF: I’ve always wondered about those iconic pink coats I see you guys wearing at festivals and shows. Were they inspired by the Pink Ladies in Grease?

LH: Ha! Not at all. The pink coats were more inspired by those cool satin baseball jackets from the 70s. Pink just seemed like the right color when we were looking at our options, and we’re lucky our friend Drew worked at an embroidery shop that made it happen for us.

AF: I like to think of a band’s sound like an evolution—and each new album is like a step on that journey. Tell me about the new album Skin, and how it builds on past work you’ve done?

LH: Skin feels like we all finally settled in to our sound, and the upcoming album seems even more like that. Our sound is constantly evolving, and we’re inspired by so many different genres, but on Skin, we definitely sound more like what we sound like live, which had been hard to capture in the studio up until that point.

AF: Tell me what birthed the title track. I’m curious about whose perspective it is.

LH: The title track is all about the feeling of being two people trapped in the same body. I definitely feel like I have a Dr. Jekyll and Mr. Hyde situation happen when I drink too much – something seems to switch in my brain and I’m a different person. It doesn’t happen as often anymore, but at the time of writing that album I was at a very low point in my life, and I was drinking often and doing stupid things.

AF: Also—“Twins.” I love that switch at the bridge—what’s the story behind that song?

LH: “Twins” is about feeling connected to someone or something that isn’t necessarily good for you, but you feel so kindred to it, like you could be twins. It’s mainly about a relationship with someone that is so toxic, and you know it is, but you can’t help but feel like you’re cut from the same cloth.

AF: What has working with Billy Anderson and Ed Brooks been like? What do they bring to Skin? Did they stoke any sonic realizations?

LH: Billy and Ed are both so wonderful to work with and are extremely skilled in their crafts. Billy was patient with us and had a lot of ideas to throw at us that we loved. He is an extremely inspired and creative person, and would have us do things like hit drum sticks on walls and trash cans and whatever else we could find. He’s passionate about finding and harnessing tone, and was really inspiring and hilarious to work with.

Ed is a master at what he does, no pun intended. He reels in our sound while also honoring all of the dynamics in it. He’s patient, and really took the time to explain to us the entire mastering process as it was happening.

AF: I love how your bio calls your sound a “glam creep strut.” Is that how do you define your sound as a group currently? Was it ever intimidating to say you make punk/grunge in Seattle? Do you feel automatically aligned with the history here?

LH: We call ourselves glam creep strut because we have no idea what else to call us. We’ve actually never claimed to be a grunge band; I think it’s just a term that tends to be blanketed over any band that has moody or aggressive music. We all appreciate the grunge scene from the ’90s, but it’s never been a goal to replicate that sound, or any sound for that matter. When someone says grunge it makes us think more of a time and place and less of a genre of music. We’re obviously inspired by the place we live, but definitely don’t feel held back by what we write, and feel that our sound as a band is spans many genres. At the end of the day, it sounds like Powwers.

AF: Have you toured with Skin? What’s next?

LH: We’ve toured with Skin all around the country a lot this year. We are headed out to Treefort in March and might add a few dates around that with our good friend, Prism Tats. Then, we’re focusing on releasing our next record, What You Wanted, and heavily touring in support of that in 2020.

Check out Wild Powwers at Belltown Yacht Club on December 20 and follow the band on Facebook for ongoing updates.